Please imagine the inviting smoothness of the unbroken spine, the crisp feel of as-yet-un-turned pages, and that lovely new-book smell as you read this….

Two new items are up on the what the afternoon knows bookshelves. There’s Poem for the Day (1), a great anthology of poems, which is ideal as a present, and/or for encouraging you to read poetry. And there’s a remarkable bit of non-fiction, Jane Shilling’s The Stranger in the Mirror: a memoir of middle age. This is an extraordinary book, honest, moving, and beautifully written.

Would love to hear from anyone else who’s read, or is reading these.

A few years ago, I worked part-time at Waterstone’s (yes, I’m putting the apostrophe in even though it’s now been dropped from the signs and literature; too alienating and elitist or something), where I was in charge of “MBS”: health, religion, self-help, personal development and various other things. This meant that I Iearned more than I might otherwise have done about what Steven Fry has dismissed as ‘shivering madness[es]’—crystal healing, Angel Cards, Ordering from the Universe and so on. But it also meant that I got to spend quite a lot of time upstairs, where non-fiction, poetry and other splendid things lived. I remember unpacking The Stranger in the Mirror from the tote and thinking ‘What a brilliant title. I’ll read that some day’. I knew it wasn’t time yet—but a few years later, it is time, and I’ve read it. I found it profoundly moving.

As one who has spent the occasional bit of mirror-time, of late, lifting one side of my face and looking glumly at the resulting lopsided young/middle-aged reflection, I found the book’s inspired title encapsulated a feeling which is about so much more than looks (though coming to terms with the changes in looks is a thing to do in itself). I recognised, instantly and deeply, that sense of the defamiliarisation of ourselves which time brings about. Shilling describes herself as being ‘taken by surprise’ by middle-age. I get that, and suspect that others may, too.

Quoting Julian Barnes on what he terms ‘le reveil mortel‘—that is, the moment of apprehending the reality of one’s own mortality—Shilling notes that it wasn’t so much that this was news, but that she saw her life as a failure,

nothing behind me but mistakes and disappointments, and nothing ahead but the prospect of a series of small and large betrayals by the body that I had inhabited so insouciantly until now, until the moment of final, catastrophic betrayal.

Phew. I’m not resorting to cliche here when I say I found this book piercingly honest. I simply mean that Shilling’s realness, her willingness to say things that others might dismiss as “feeling sorry for herself” (how I LOATHE that phrase), instantly, painfully found their way to the heart of me, and to some of the sorrows and terrors I have about midlife, ageing and dying. Never having laboured under the burdens of great beauty and stylishness, I don’t relate so immediately to the the chapters about dress and style. But the stuff about middle-age as a reckoning point, a place where we review, reflect, acknowledge, lament, grieve…? Yes. I wept many times as I read this book, but am glad to have done so. They were the howls and keenings which denote irrevocable loss and, as such, were necessary and important.

I loved the directness and honesty of The Stranger, manifest from the Preface—’At 47 I thought that  steady nerve, a good haircut and an enquiring mind would be sufficient protection against most of the outrages that middle age might inflict. By 50 I knew better’—and throughout.  Without being Eeyore, or denying what there is to be celebrated about ageing, Shilling refuses to have the realities of middle-age elided or given some misleading gloss. Commenting on Gloria Steinem’s description of later life as a ‘”go[ing] back to that clear-eyed, shit-free”‘ way of being that childhood enjoys, but with the welcome addition of the kinds of power and agency children rarely have, Shilling notes:

Although there are good reasons to be upbeat about growing old, it is a mistake to think that life’s journey is circular. Getting old does not involve a return to anywhere. It is an onward passage to an unknown destination.

And the unknown is often frightening. The Stranger in the Mirror honours the intensities to be experienced in middle-age. It has much about being lost—from oneself, in the world; familiar waymarkers and trig points shift or vanish in middle-age—and about the fear which comes with being lost, and loss. It celebrates life’s richness and owns the anguish of things passing. Shilling seems wonderfully qualm-free about sharing her emotions, and I love that. We read to know we are not alone.

It is refreshing that Shilling offers us no consolatory rom-com narrative of Salvation-through-Relationship (though the importance of relationship, or relatedness-with-others, is never denied). I was rejoicing in feeling so accompanied, right until the final two sentences of the acknowledgements: ‘My dear son Alexander tolerates with patience and generosity the trials of having a writing mother. He is the point of it all’. At the time of first reading those closing words, they plunged me into despair: I felt abandoned and—for some time at least, while gasping with pain—betrayed. Now, more than 2 years (and a lot of grieving) since I first read those words, I can deal with them, see them for what they are: her truth. Not the truth.

As you will have gathered, The Stranger in the Mirror is not chirpy self-help, hot-flushes-and-the-highway-to-happiness style! Nonetheless, I found it very helpful indeed; an absorbing, moving read which made me at home in Shilling’s world and more so in my own. I’d be very interested to hear what you think.

I’m so glad this book exists.

And precisely because it’s an insightful, useful, empathic, warm, inspiring and encouraging book—which completely fulfils the “we read to know we are not alone” brief, and which I don’t hesitate to recommend wholeheartedly—I’m going to get my tiny bits of objection out of the way first. Then I can get on with saying why I think it’s so good.

I can’t help hoping that the first word of the title, and the subtitle, were foisted upon the author by an editor or publisher who didn’t quite get the point. I find the word “Rocking”, and the determined jauntiness of “12 weeks to your plan B”, a little ‘the lady doth protest too much’.* Ms Day’s book sensitively, faithfully and compassionately refuses to elide the pain of those who are what she calls childless-by-circumstance—ie those who have not chosen childlessness. (Ms Day calls those who chose not to have children the “child-free”, which is a useful distinction). That it honours what is is to be without children—particularly in this, our very family-centric culture—and that it insists upon the depth of the grief to be felt for what has not been, is a large part of the book’s appeal. To have the subtitle imply, then, that there is some swift bypass round doing the work of grieving does not do justice to Ms Day’s sensitivity and insight, nor to the experience of the grief in itself. In her important and necessary book, Ms Day manages to unpack all that can lie behind ‘Me? Oh, I don’t have any children’ without ever descending into Victimness. Wonderful, inspiring, necessary.

The opening sentence broke me open (all over again) when I first read it: “This book is for all the mothers who don’t have children”. (I just teared up when I typed it out!) For me, there is something so redemptive, and therefore precious, about the idea of retaining that part of my identity, even though it is not manifest in the world in the obvious or usual ways. In chapter one also, her list of “Fifty ways not to be a mother (With apologies to Paul Simon)” is also extraordinary valuable; I recognised myself in many of the entries. While I found some of the practical exercises less striking for me personally—I’m already committed to personal development work, partly because of my profession and partly because, well, I’m worth it—I think they offer useful structures for reflection; 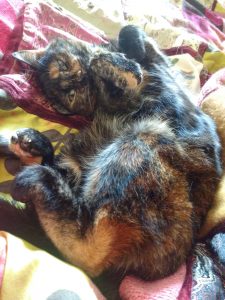 and the support Ms Day offers to help us see our childlessness in a political context is also inspiring. I absolutely loved, too, the section exploring the different stereotypes which childless women may fear. Apparently “Mad Cat Woman” seems, at Ms Day’s workshops at least, to be the most feared. (And that certainly resonates for me!).

Rocking the life Unexpected is, for me, a book to be taken slowly, as and when I am up to it. I trust my instincts as to when it’s time to read the next bit, or to re-read bits. I haven’t finished it yet, then, and I definitely haven’t finished the emotional work that it honours and recognises. But the book has been a part of me being able to identify some of the details in the grief and fear I’ve had to work through. It’s also been a huge part of me feeling less alone, less “other”, less weird in what I’m going through. And for that I will always be grateful.

Finally. .. I now feel more okay about sometimes being irritated by conversations about other people’s children—conversations in which I will never be able to have a fully-reciprocal part. Boy, am I glad I can now quietly, mentally, roll my eyes and say ‘Enough already’. Thank you, Ms Day. Thank you.

*(I believe the latest editions have replaced the word “rocking” with “living”, which I think is much more true to the book as a whole).

“We read to know that we are not alone…”

I facilitate a range of workshops and ongoing groups which are all designed to give people a shared time and space to think about life-stuff—like love, or loss, or change, or living happily and gently in this wondrous and complicated world. They all work in a person-centred way, which means you are welcome just as you are, and will be met with respect, empathy, interest and genuineness.

The exploration of poems, other texts, and interesting ideas is at the heart of the sessions, together with the time to reflect on your own experience. You don’t need to be an expert on anything. You definitely won’t be grilled or put on the spot, nor required to work with others on developing a means of crossing a ravine using only string, biscuits, and 14 copies of War and Peace. No special knowledge or experience is required: only your desire to take some time for yourself—to explore, ponder, and share as much or as little as you like. And, of course, to spend time with like-minded, curious, kindly people.

Some of these sessions I do on my own, some with other people. About to start—autumn 2018 onwards—is a shared reading and “working through” of Twelve Steps to a Compassionate Life by Karen Armstrong. Details of the 42 group and the What Are Words Worth? group can be found on the relevant pages on this site. Please do get in touch if you want to know anything more about any of the sessions.