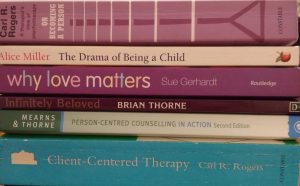 ‘Things fall apart; the centre cannot hold;/ Mere anarchy is loosed upon the world’…  I find myself thinking that a lot, these days. How fortunate I am, then, to have a job which acts as an antidote to despair and fear. I write thing 33 in celebration of the joys of being a person-centred counsellor.

It’s true that washing up, vacuuming and ironing are three activities which only become interesting when the alternative is writing up my client notes. Never mind that notes are an essential part of the work, being a place to reflect, self-supervise, allow feelings and ideas to come to the surface, get a meta position on the work… Meh. As END_OF_DOCUMENT_TOKEN_TO_BE_REPLACED 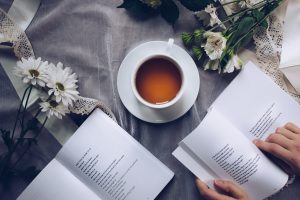 Thus my friend Simon, speaking about his time reading English at Oxford and the death-by-theory thing which can so often happen during formal study. I know what he means. In my very first group supervision at Cambridge we were issued copies of a poem—I have repressed the knowledge of what it was, if I ever knew—and the Director of Studies’ opening gambit END_OF_DOCUMENT_TOKEN_TO_BE_REPLACED

About suffering they were never wrong,
The Old Masters: how well they understood
Its human position: how it takes place
While someone else is eating or opening a window or just walking dully along;
How, when the aged are reverently, passionately waiting
For the miraculous birth, there always must be
Children who did not specially want it to happen, skating
On a pond at the edge of the wood:
They never forgot
That even the dreadful martyrdom must run its course
Anyhow in a corner, some untidy spot
Where the dogs go on with their doggy life and the torturer’s horse
Scratches its innocent behind on a tree.

In Breugel’s Icarus, for instance: how everything turns away
Quite leisurely from the disaster; the ploughman may
Have heard the splash, the forsaken cry,
But for him it was not an important failure; the sun shone
As it had to on the white legs disappearing into the green
Water, and the expensive delicate ship that must have seen
Something amazing, a boy falling out of the sky,
Had somewhere to get to and sailed calmly on.

You can see the image which inspired this poem here.

I’ve spent years loving and thinking about this poem, and working with it with groups, and what follows is a long close-reading of it, which comes out of my many readings and re-readings, and also from comments offered by participants in many different groups. My observations might open up different aspects of the poem for you, in which case, great! If not, feel free to abandon it in para. one, and just re-read the poem. That the thing which matters, on this page.

The poem opens with a bold statement, clearly made: that the ‘Old Masters’ were always right about human suffering. The inverted word-order in the opening statement places the emphasis on the word ‘suffering’ (rather than on ‘Old Masters’): he puts suffering “front and centre”, as they say, just as the art does. He’s also pointing out that that great art—that is, accurate art, which is faithful to the human experience—has always seen clearly the ‘human position’ of that suffering: both central to our own, lived experience, and yet also incidental to those billions of lives which are not ours. The poem’s key idea, then, is set up in the opening lines.

The first 3 lines are all equal in length, 10 beats long. This regular pattern is then disrupted by the 22-beat fourth line, which mimics the on-and-on-ness of our everyday lives, and which also breaks the language’s pattern—just as grief, loss or other suffering intrude into and disrupt our ‘normality’. The greatly attentuated fourth line feels further extended by the lack of punctuation—which forces us to take the whole length of the line in one breath—and by the slowed, drawn out, slightly hard-to-say “walking dully along”, whose assonance, elongated vowel sounds and slightly awkward repetitions of the ‘l’ sound can cause your tongue to fumble the words (your tongue itself becomes “dull”). The banality of much of our everyday life is juxtaposed with the ‘suffering’ of the opening line. This is the ‘human position’ of suffering: it’s happening all around us, all the time. Perceived or, as here in this text, unperceived, the suffering is ‘dreadful’: utterly devastating, utterly real.

Lines 5-8 then go on to explore differences in perspective, contrasting the intense with the casual, the life-changing with the ordinary. ‘[R]everently, passionately…/…miraculous’ (note how that comma forces us to pause, the better to appreciate the intensity and import of what is happening for the ‘aged’) are set alongside ‘not specially’, and the word ‘skating’ is poised on the line-end, the word itself drifting off and away just as the ‘children’ glide on, unconcerned. That ‘not specially’ is somehow exquisitely more painful than an outright “didn’t want it to happen”: the ‘miraculous birth’ was not even important enough for the children to have a strong feeling about it. You can imagine them turning-away, uninterested, with a shrug—a whatever.

In the remainder of this first stanza Auden develops the Christian imagery. The Passion of Christ is seen to ‘run its course’—it had an inevitable unfolding—’anyhow in a corner, some untidy spot’. The note is almost bathetic, Golgotha imagined simply as scruffy, Christ merely the object of a routine and unimportant, if tortuous, execution. There is no mention of the Marys, of the disciples, of any of those for whom the Passion had life-changing meaning. Instead the Crucifixion, though it may be the ‘dreadful martyrdom’, is merely a job of work for the soldiers. We imagine the horses restless in the heat and dust, the dogs sniffing at the cross, perhaps lifting their legs to it (the ‘doggy li[fe]’). This, then, is the ‘human position’ of the climactic act of suffering and submission in a story which provided—and provides—the central meaning of so many lives.

What Auden is inviting us to grasp is just this paradox: that the important can also, and simultaneously, be supremely unimportant, the momentous merely an unremarkable commonplace. What makes the difference is perspective. Stanza two expands this idea. Auden refers to Bruegel’s painting as Icarus; in fact the full title is Landscape with the fall of Icarus. Embedded in the very title of the work as Bruegel conceived it, then, is this idea Auden is exploring: that Icarus’ fall is only part of the picture, only one thing happening among many, within a wider scene. As with the ‘children who did not specially want it to happen’, here ‘everything’ does not even turn away abruptly but ‘quite leisurely’—nothing important enough is happening for there to be quick reactions. Again, note Auden’s exquisite touch: the juxtaposition of ‘leisurely’ and ‘disaster’ is utterly poignant, as is ‘important failure’ and ‘may/have heard….forsaken’ [my italics]. The ploughman, foregrounded in the painting, only ‘may’ have heard something (note how the ‘may’ is hung tantalisingly on a line-end); but that something is a ‘forsaken cry’, which recalls the anguish of the suffering Christ: ‘And at the ninth hour Jesus cried in a loud voice…, My God, My God, why hast thou forsaken me?’ (Mark, 15: 34). Thus while loss, suffering, abandonment, are set squarely in the centre of human experience, at the same time they are also seen as incidental, off-centre, unnoticed, unimportant.

Auden describes Icarus’ fall in denotative words—’white legs… green water’; that is to say, words which are as free as possible of connotation, association, value, or any meaning other than the simply factual. Indeed, throughout stanza two—and the whole of the stanza is one long sentence, with clause piled on clause as if we may be building to some climactic vision or realisation, some registering of the import of events—there is a preponderance of denotative language which downplays even as it registers the extraordinary; ‘something amazing, a boy falling out of the sky’. What the ship ‘must have seen’ [my italics] is given in a parenthesis which makes us stop to notice: it is separated out by the commas, as if to slow us down, to demand our attention: we must do the seeing. Yet also, and at the same time, it is as it were dismissed and diminished as a side issue, not even given the dignity of its own sentence; for the main verb (and action) in that long final clause is ‘the expensive delicate ship… sailed calmly on’. Life, as we might say these days, goes on—not just after but at the same time as tragedy, trauma, loss and despair.

But this absence of feeling or meaning, this detachment, almost demand of the reader that s/he re-invest the sight with meaning. Auden acknowledges the co-existing realities of the deeply, tragically felt and the unnoticed, unnoticing, ‘unimportant’ everyday, reminding us that huge things are happening all the time, all over the place, concurrently and beside the myriad small things in which we so easily lose ourselves. And he also invites us to witness and thus reframe, re-dignify, re-solemnise those unnoticed events. It’s not just about Christ, but about all of us who eat, open windows and walk dully along. We are all invited to remain aware.

This poem resonates so much with those who are experiencing loss. It appears in every loss/grief anthology I know, usually as the first, or one of the first poems. There is something achingly typical in bereavement’s common and slightly bewildered sense, that the world ought to be completely different, completely shaken and changed. But it is not. And yet it is. This great, great poem moves between the views, between visions, because experience does.

We read to know we are not alone… 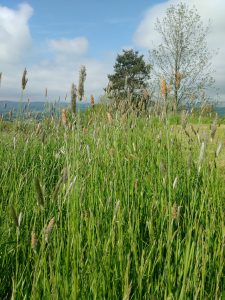 I’m very pleased to be able to say that info. about the first one-day workshop is now up on the site.

I’m getting the chance to work with Simon Davies, late of Dove Cottage, and it’s a such a treat to be plotting and planning together. We had a lovely day yesterday, talking excitedly, eating slightly too much, getting breadcrumbs on the many books of poems which got pulled off the shelves, and generally having ourselves a great time. We are really looking forward to working with whoever turns up and whatever they bring. Do nip over to harvest and seed-time and have a look. One of those people might be you! 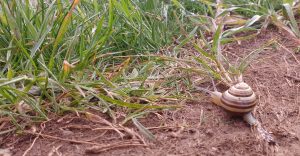 I’m just about to set off to do thing 4, and I’ll be writing about thing 3 on the train—so much to do, so many things to wonder about! But this is a quick post to let you know that on the events/workshop pages here at what the afternoon knows there is now information about the first of this year’s events: the workshop series I’m facilitating with Hazel Clarke, the Senior Guide from Dove Cottage. I imagine that sooner or later this will feature as one of the things, as I love this work so much; but in the meantime you can find out more about it here: the way we live now: understanding today, reimagining tomorrow.

Off to force the rucksack zip shut…