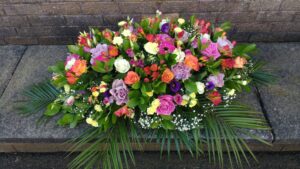 Some cognates: grieve, mourn, lament, sorrow. Accept. Deal. We’ve all been doing a lot of that.

We’ve been in a strange new world. Like everyone else, I’ve noticed it in all sorts of ways from the micro to the macro. Can’t be sitting writing this column in my favourite writing café. Can’t be working, going out, meeting friends, having a hug; can’t be spontaneous, get this toothache looked at, deal with my hair (I mean, really), plan anything (this year’s Things have been wiped from the calendar)—can’t know what the future, near or far, is going to look like; can’t feel as safe in the world as I once did…. You know all this. You’re living it too. As is pointed out all over the place, we now have the chance to do things differently and this, though it cannot offset the price we’ve paid, would be Something, bought at a terrible cost. Let us all hope for that; but for now, we’re all required to let go—to grieve for a life we will not see again (or at least, for a very long time).

As well as all this, though, I write Thing 49 about letting go because my Mum died (not of CV) at the end of March, right at the beginning of the UK lockdown. As what Hardy would probably call a ‘concatenation of events’ it’s been a doozy—so overwhelming I can’t let myself realise it. Not fully. The first time I walked into town after my Dad died, I was in that newly-shelled, soft, entirely vulnerable state—I’m thinking of a prawn for some reason, here; maybe it’s a foetal position thing—in which the world seemed over-bright and lens-flare-ish: impossibly large and looming, yet remote at the same time, a hall of mirrors in which even the familiar was distorted and different. My landscape would never be what it had been, yet the world was carrying on. This was bewilderingly incomprehensible (and probably immediately recognisable to all who have grieved).

But since Mum died I’ve noticed the absence of that sense of defamiliarisation and disorientation. Yes, my world will never be the same again; but then, neither will the world at large. And without that sense of contrast—usual/unusual; everyday/once-in-a-lifetime—it’s harder to understand what’s happening to me. It’s confusing. Nothingy. Hard to engage with. I feel strangely robbed of that state of being set apart by grief—allowed to inhabit a space adjacent, parallel to the world, for a time at least, while I keen and stare and realise what has happened.

And Mum. Dear Mum. Her long, painful, necessarily-solitary process of relinquishing everything that made her her is finally over. After decades of caring for my father, she really wanted some time that was hers. And she had some—we had some together; but not as much as she wanted. After some false alarms and slow encroachments of ill health, over the last year the downhill tumble gathered more momentum than any of us could have imagined. The Christmas before last she did her usual epic job of holding the whole caboodle, hosting her small-but-precious family; and only the fact that she let us help with the washing up betrayed any kind of difference. By this last Christmas, though, she was frail in bed, the carers cancelled for the day so that we could rip open the presents she was too weak to hold. For me this was punctuated by surreal sorties into the kitchen to peel parsnips, talk about when our guest was arriving (mum had insisted) and, on my own, weep hard, urgent tears for the life that had already gone (even though the breath was still in her).

Mum had to let go of going out, walking, putting on the make-up I’d never seen her without; shopping, watering the plants, feeding the birds, meeting her friends, visiting, going out of the house, reading, crocheting, dressing herself, having her bath, breathing without piped oxygen… She had to let go of agency and freedom and capacity and personhood: she’d always Tonka-trucked her way over everything and here at last was something she couldn’t do that with. She became a service-user; an object not a subject; the shadow of herself.

And she didn’t get enough help. None of us did. We all had to let go of the idea that the health and social services are still ok-enough, that people will be there when they are really needed, that things will be all right. They weren’t. The last year has been indescribable; and that last weekend was a nightmare of hours in phone queues and promised doctors who didn’t turn up and missions to Covid-emptied hospitals to collect drugs which weren’t there, and running round crying hysterically because I was simply beyond everything. I fell in love with two sets of paramedics in one day, simply because they came, and were kind, and took the terrible burden of responsibility off our shoulders, for a few moments at least.

And now, here in another hospital, Mum is dying—really, finally dying at last. She was admitted last night about ten amidst talk of a brisk round of antibiotics and then home to convalesce; by this morning I’m being rung to say she isn’t going to survive. Richard waits for 9 hours in a deserted waiting room out there while I sit in here on my own with Mum, gloved, gowned and masked. No one else can be there because it’s a “red” Covid ward—though we’re pretty sure it’s not Covid, without the results she can’t be cleared—and I know, from a whispered conversation I overheard, that I’m only there because she’s going to die very soon. I show her my sister and nephew on Skype (one shielding, one abroad) and the last coherent thing she does is smile at my tablet and say “Nice”, thinking I’m showing her a picture. I hold her hand in my blue latex hand and sing and talk and ask her to forgive me my failings; but I have to let go of that hope, the fantasy of the hallmark moment, because she’s lost in the delirium, that last deep inward journey to the finishing line (or is it the starting line?). Her breathing has gone strange and every so often she starts upright, her eyes wide and rolling in what looks like terror. I do my best to soothe her, ignoring for the moment the utter unbearableness of her not recognising me. I look at her left hand which, thin though it is after months of not really eating, still looks like her. The elegant fingers, the beautifully shaped nails, the plain, flat wedding ring worn smooth with decades of love. This is the last I will see of Mum. I look as hard as I can, wanting to hold on, knowing I am letting go. After 11 hours I leave, telling her that if she needs to go before I’m back in the morning, just to go. The call comes 3 hours later. She has left.

Because of lockdown, all the grim, practical, necessary stuff around the ending of a life has been in limbo, or inching along. I’ve not even been able to go back there except for the strange, 2-people-in-a-crem, do-it-yourself funeral. When I return, Mum won’t be there to look round at the sound of my footsteps on the stairs, her face lighting up as she sees me (in fact this went some time ago; the struggle for breath consumed everything). She’ll never make tattie scones or the best scrambled eggs in the world; never pack so much in her hand luggage that she can’t carry it on her own; never brush her hair or look at her garden or complain about the dreadful tea Susie and I make; never look forward to her Saturday night Eastenders marathon with my sister or eat Dolly Mixtures or hear me sing or read this column or and text me to say she enjoyed it… The countless things that make up a relationship and a shared life. We have to let go of them all.

Deeper than this, though, I’ve had to let go of the idea that things between us can ever been any different, any better than they were. Really, they were never going to be: we were who we were, and alongside deep love there was deep incomprehension and “missing” of each other. But no matter how much you know there’s no chance of depth connection, there’s a level of relinquishing the hope of it which is only really possible with the finality of death. And now death has come. There are no more chances. I’m left with that terrible feeling Eliot catches so well in her description of Adam Bede’s father’s death: “When death, the great Reconciler, has come, it is never our tenderness that we repent of, but our severity’. Oh, the regret, the guilt. At some point I’ll have to try to let go of all that, too.

So I am letting go of being a child. Of there being someone whose “job” it is to be interested, to care; there’s a horrible loneliness now, and a terrible fear that no-one will be there. There is the chill wind now at my back: the generation above has gone and it will be us next, later or soon. I’ve moved up the ranks. I feel vulnerable. I feel alone. Once again I feel flooded by the grief of not having a family: it’s one of those griefs that comes around and around, prompted by different life events, and I feel all over again what Berenice Smith calls The Full Stop of childlessness. This is it. My own line ends with me.

But in all this I do know that Mum’s life had become intolerably hard. Although she didn’t want to “give up”, in the end she needed to let go. It was time. When I came off the phone to the hospital I went upstairs to the room where she and Dad spent their declining months and years. Since summer 2012 Dad’s armchair has been empty, or empty of him; my sister did an extraordinary job of accompanying, and caring for, Mum, and spent hours and days and weeks and months sitting in that chair, and tending her. But the gap that Dad left could never be filled. Now, in the 3am silence, the light from the window was enough to show those two chairs, still angled cosily towards each other; and I was surprised to find, as I stood looking at them, that it seemed a strange kind of all right now that they were both empty. Somehow this double absence it made it easier to imagine a renewed togetherness—somehow, somewhere else. My mouth curved into a wan smile. Love is strong as death, and loss the terrible school in which we learn this.

And in these nightmarish locked-down months since Mum died I’ve had glimpses of what letting go can also mean: an end to effort. Stopping resisting. Realising you’re not in charge, taking your hands off the wheel. The beginning of acquiescence. The end of the old, the former, the “then”: the start of “since…”: the new now. Whatever that may turn out to be. 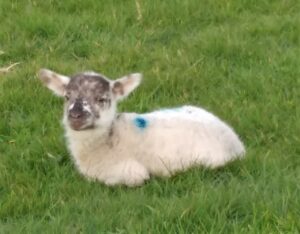 … A marvellous, marvellous poem about letting go: read it here.