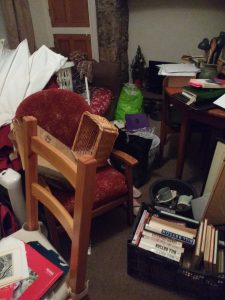 I know. Sounds most unlikely as a special or celebratory act, right? But stay with me. It’s been a pretty thorough tidying up, with some surprisingly lovely and unexpectedly profound things involved.

It all started when my landlady was getting people in to quote for redecorating my house, and one of the decorators thus consulted had a look in the front room where all my books and bookbinding equipment and supplies live—and we are talking a lot of paper here, friends—and said, ‘Hmm, when we’re done, you’ll have a chance to put things back nicely, won’t you?’. Patronising git. (And he left the seat up, too.) END_OF_DOCUMENT_TOKEN_TO_BE_REPLACED 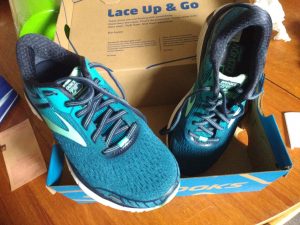 … and I don’t mean in some metaphorical sense. It’s not an image for being efficient, or moving through existence effortlessly and with ease. Nope. It’s actual running. I know. You couldn’t be more surprised than I am.

When I was at boarding school we had to do these things called Standards, which basically meant that everyone with the requisite complement of limbs had to “do” every athletics event—track, field and END_OF_DOCUMENT_TOKEN_TO_BE_REPLACED

Extraordinary, mysterious and beautiful. And happening live, in front of us, right here, right now. 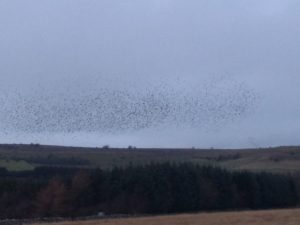 At the beginning of part two of his autobiography, Clive James comments on his first sight of snow and the English cityscapes, noting: ‘what I was seeing was a familiar [sight] made strange by being actual instead of transmitted through cultural intermediaries’. Replace the word ‘strange’ in that sentence with ‘make-you-weep wonderful’ and you have something of what it was like to see a murmuration of starlings. I’ve seen them on TV and youtube, seen the images reproduced END_OF_DOCUMENT_TOKEN_TO_BE_REPLACED

A few years ago, I worked part-time at Waterstone’s (yes, I’m putting the apostrophe in even though it’s now been dropped from the signs and literature; too alienating and elitist or something), where I was in charge of “MBS”: health, religion, self-help, personal development and various other things. This meant that I Iearned more than I might otherwise have done about what Steven Fry has dismissed as ‘shivering madness[es]’—crystal healing, Angel Cards, Ordering from the Universe and so on. But it also meant that I got to spend quite a lot of time upstairs, where non-fiction, poetry and other splendid things lived. I remember unpacking The Stranger in the Mirror from the tote and thinking ‘What a brilliant title. I’ll read that some day’. I knew it wasn’t time yet—but a few years later, it is time, and I’ve read it. I found it profoundly moving.

As one who has spent the occasional bit of mirror-time, of late, lifting one side of my face and looking glumly at the resulting lopsided young/middle-aged reflection, I found the book’s inspired title encapsulated a feeling which is about so much more than looks (though coming to terms with the changes in looks is a thing to do in itself). I recognised, instantly and deeply, that sense of the defamiliarisation of ourselves which time brings about. Shilling describes herself as being ‘taken by surprise’ by middle-age. I get that, and suspect that others may, too.

Quoting Julian Barnes on what he terms ‘le reveil mortel‘—that is, the moment of apprehending the reality of one’s own mortality—Shilling notes that it wasn’t so much that this was news, but that she saw her life as a failure,

nothing behind me but mistakes and disappointments, and nothing ahead but the prospect of a series of small and large betrayals by the body that I had inhabited so insouciantly until now, until the moment of final, catastrophic betrayal.

Phew. I’m not resorting to cliche here when I say I found this book piercingly honest. I simply mean that Shilling’s realness, her willingness to say things that others might dismiss as “feeling sorry for herself” (how I LOATHE that phrase), instantly, painfully found their way to the heart of me, and to some of the sorrows and terrors I have about midlife, ageing and dying. Never having laboured under the burdens of great beauty and stylishness, I don’t relate so immediately to the the chapters about dress and style. But the stuff about middle-age as a reckoning point, a place where we review, reflect, acknowledge, lament, grieve…? Yes. I wept many times as I read this book, but am glad to have done so. They were the howls and keenings which denote irrevocable loss and, as such, were necessary and important.

I loved the directness and honesty of The Stranger, manifest from the Preface—’At 47 I thought that  steady nerve, a good haircut and an enquiring mind would be sufficient protection against most of the outrages that middle age might inflict. By 50 I knew better’—and throughout.  Without being Eeyore, or denying what there is to be celebrated about ageing, Shilling refuses to have the realities of middle-age elided or given some misleading gloss. Commenting on Gloria Steinem’s description of later life as a ‘”go[ing] back to that clear-eyed, shit-free”‘ way of being that childhood enjoys, but with the welcome addition of the kinds of power and agency children rarely have, Shilling notes:

Although there are good reasons to be upbeat about growing old, it is a mistake to think that life’s journey is circular. Getting old does not involve a return to anywhere. It is an onward passage to an unknown destination.

And the unknown is often frightening. The Stranger in the Mirror honours the intensities to be experienced in middle-age. It has much about being lost—from oneself, in the world; familiar waymarkers and trig points shift or vanish in middle-age—and about the fear which comes with being lost, and loss. It celebrates life’s richness and owns the anguish of things passing. Shilling seems wonderfully qualm-free about sharing her emotions, and I love that. We read to know we are not alone.

It is refreshing that Shilling offers us no consolatory rom-com narrative of Salvation-through-Relationship (though the importance of relationship, or relatedness-with-others, is never denied). I was rejoicing in feeling so accompanied, right until the final two sentences of the acknowledgements: ‘My dear son Alexander tolerates with patience and generosity the trials of having a writing mother. He is the point of it all’. At the time of first reading those closing words, they plunged me into despair: I felt abandoned and—for some time at least, while gasping with pain—betrayed. Now, more than 2 years (and a lot of grieving) since I first read those words, I can deal with them, see them for what they are: her truth. Not the truth.

As you will have gathered, The Stranger in the Mirror is not chirpy self-help, hot-flushes-and-the-highway-to-happiness style! Nonetheless, I found it very helpful indeed; an absorbing, moving read which made me at home in Shilling’s world and more so in my own. I’d be very interested to hear what you think.

Some of you who are following these pages may know— 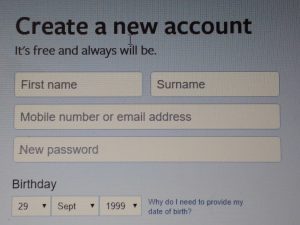 Wait. Before I go on: those of you who are following these pages: thank you. I’m not yet ready to use “message” as a verb, but I do appreciate being, um, contacted, whether privately or publicly. And it’s wonderful to know things I say are resonating. Is it bad that I want to use the slogan for the Syrius Cybernetics Corporation? Share and enjoy, companions, share and enjoy.

Anyway. Some of you who are following these pages may know that, in the hope of spreading the word about what the afternoon knows, I’m recently embarked END_OF_DOCUMENT_TOKEN_TO_BE_REPLACED