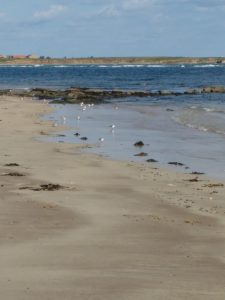 For me, holidaying alone—I love the slightly quaint feel of “holiday” as a verb—can be a tricky undertaking, both in the conceiving and in the doing thereof. I can well see that a few days away, alone, might END_OF_DOCUMENT_TOKEN_TO_BE_REPLACED 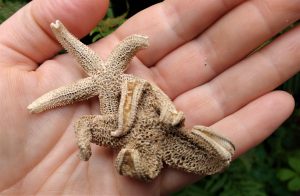 One of the lines which convinced me about Tom Waits; and I remain convinced, despite the discovery that the line was lifted more or less verbatim from Harvey. In the film, Elwood P Dowd also claims ‘I’ve wrestled with reality for 35 years… and I’m happy to state I finally won out over it’. I went to the beach, this day, feeling that reality had definitely won out over me—more TS Eliot and a reality overdose than Jimmy Stewart and an escape from it. But maybe people rarely bring anything small to the sea, either. END_OF_DOCUMENT_TOKEN_TO_BE_REPLACED

You can read this poem here.

Last year, while doing the prep. for a session I was running, I had most of the books off the poetry shelves, looking for texts about friendship that weren’t of the saccharine, emetic, vacuous or Inspirational Verse breeds. I wanted a poem that said something about what friendship is about, how it “works”, rather than merely saying what a Good Thing it is. The celebration of friendship in verse seems to be far rarer, though, than the celebration of romantic love. But I did eventually find a few poems I really liked, which I added to this quiet treasure by Jennings. It was a thought-provoking exercise to go through.

Friendship is, most of the time, both undramatic and glorious. It’s essential without (very often!) causing the pulse to race. I think this poem has the same quality of quiet wondrousness which it celebrates in its subject. It’s written in simple rhyming couplets which are neat without being clangingly predictable. Its rhythm is measured and regular without being stodgy, and is lifted by its judicious use of enjambement. Its vocabulary is unfussy but careful, naming clearly the simple but precious qualities it celebrates—’gentleness… understanding… trust… respect… awe’.

I find the use of the word ‘awe’ really interesting. It makes me think of how friendship—like any of the loves—can remind us, every so often, of the utter other-ness of the other party. This is a real person, distinct from us and with their own set of likes and dislikes, habits and experiences and quirks… and yet they choose to share time with us, to give us the precious gift of themselves. That is indeed awesome—in the Bill-and-Ted sense of great, but also in the proper sense of amazing, wonderful, breathtaking. 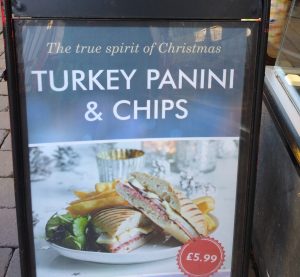 So, this has to be one of the weirdest things I’ve seen this Christmas. “The true spirit of Christmas: Turkey panini and chips”. I mean, what? Who wrote that, and why? And why are they still working in advertising??

There’s something about how adrift things have got, here (unless of course this is so achingly post- post- modern and ironic that it should come with paracetamol) which inclines me either to laugh, or weep. I’ve decided to laugh, and END_OF_DOCUMENT_TOKEN_TO_BE_REPLACED

You can read this poem here. No readers’ notes required!