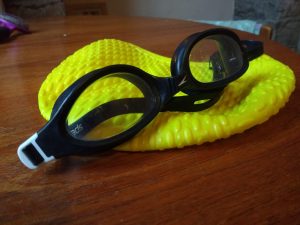 A few days before my birthday I was checking out the times for Adult Swimming (less interesting than it sounds!) at the leisure centre and found myself scrolling past a timetable entry which said ‘50+ swim’.

Then scrolling back again. Bloody hell, I thought, this time next week I can go to that. I could feel the flesh starting to dangle (more) from my upper arms even as I looked.

I don’t know why this struck me so much—I have, after all, been eyeballing this impending fact for quite some time now—but it did. I only had a few more days of being able to say I was 40-something. And so, in a strange sort of quiet panic, I said it, to all sorts of people: dear, patient people—sometimes uncomprehending, but still patient—and other, less dear, impatient people who snapped back something like Well I’m nearly 60/70/80, imagine how that feels. It’s rarely helpful or healthy to have your pain trumped by someone else’s, in the moment of your expressing it (but that’s a favourite hobby horse and I shall stable it for the moment…). 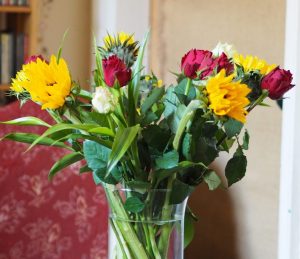 What if thoughts seem to be part of letting go. This last-minute, intense bout of self-reproach about missed opportunities/failure fully to appreciate my 40-something-ness when I inhabited it, brought to mind other grieving processes, and their anguished sense of not having made the most of something—not valued it—until it was too late. Too late: such pain-full words. But I was also reminded of an Andrew Marvell couplet which often drifts up when I’m approaching the end of something: ‘Who for parting pleasure strain/Gather roses in the rain’. The temptation to try to wring the last bits of pleasure out of things is almost always better resisted, if fuelled by desperation or fear. Accept, accept.

Not accepting at all, then, at about 10 to 12 on the night before my birthday I said, for the last time, ‘My name is Lucy, and I’m 49’. I next noticed what time it was at 12.03. ‘My name is Lucy, and I’m 50.’ Apart from this sounding like something from a 12-steps meeting, what I registered was how much better I felt than I had 13 minutes before. In Down and Out in Paris and London Orwell writes of how he felt when, having watched his money dwindle, he finally found himself penniless: ‘[there is] a feeling of relief, almost of pleasure, at knowing yourself at last genuinely down and out. You have talked so often of going to the dogs — and, well, here are the dogs, and you have reached them, and you can stand it. It takes off a lot of the anxiety’. Dread is so often (but definitely not always) worse than the dreaded thing itself.

As well as denoting my dread, these repetitions were, I think, part of my sense of a lack of ritual—in our culture anyway—to mark such transitions. There are recognised celebrations for moving into young adulthood, and sexual maturity; but where is the rite of passage marking the shift out of being no longer “of breeding age”? (That sounds so horse-y, but you know what I mean.) I shall be returning to the absence of ritual in thing 4, but for the moment want retrospectively to offer myself some empathy. This wasn’t “simply” being maudlin. I was attempting to honour something important. 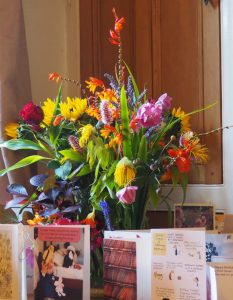 And I was overwhelmed with honouring on my birthday itself. So many lovely people gave up their time, on a school night, to be with me and each other. I carefully hadn’t called it a party, in an attempt to pre-empt possible hostess-stress on my part; which self-deception didn’t avoid me having a Margot Leadbetter moment in the Marks and Spencers’ queue, where I found myself calling Richard and shrilling: ‘I can’t find any vol-au-vents anywhere in Kendal!!!! Are there any in Manchester?’. But whatever I was calling it, people came. They brought so many flowers, cakes, chocolates, thoughtful gifts: presents of great financial value and great emotional; presents referring to shared moments in our history; presents of home-grown runner beans, blueberries, chocolate-dipped strawberries and posies picked from gardens; presents reminding me that, though I’ve no children of my own there are children with whom I have relationships: presents telling me that I am known and valued and loved.

My mum bore a precious tub of home-made vol-au-vents filling all the way from Fife to Cumbria on the train. My sister, who sped down and up the (steep) hill into town to buy candle-holders when we found that in some kind of fugue state I’d thrown away the ones I’d bought, worked so hard, with Richard/Jerry Leadbetter—setting things up, fielding my hostess-stress, and managing things during the do itself. With another kind friend, who told me she’d take over and I should just enjoy myself, they topped up drinks, produced food, washed-up glasses until there were no more and people resorted to mismatched cups. People got on with the business of being there, in whatever style suited them: so many lovely people, talking with me and with each other, making and renewing connections, being interesting and funny and kind, letting me know they cared. I wept with sheer gratitude and wonder.* I blew out fifty candles in (almost) one breath, everyone sang, and we cut the magnificent cake that the why don’t you do fifty things? friend had made for me. It only occurred to me the next day that I had forgotten to make a wish. Probably because there was nothing further I could have wished for. 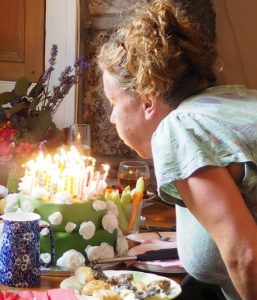