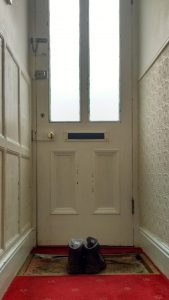 There must be some kind of equation for packing.

If N=number of things you’d like to take, C the number of things you feel you can carry, and P what you can actually fit in your pack, the initial relationship between N, C and P can be assumed to be something like N>C≥P. After that it gets a bit confusing; but the net result is definitely F, which is what you say when you pick it up for the fifteenth time that day and your shoulders are very, very angry.

I was off to Somerset for a two-day water pilgrimage from the Holy Well at Frome to Aquae Sulis, the springs which feed the baths in, well, Bath. I’d booked it months ago, when looking for something unusual to do round my birthday, and had put the tickets in the bottom desk-drawer without giving it much further thought.* Now I was about to leave! 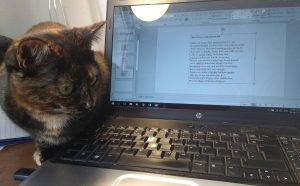 But my computer underwent a total function failure ten minutes before the taxi was due (another shrill phone call to Richard); I trod on the cat in the panic; something lovely I’d ordered from Etsy arrived and turned out to be faulty, leading to a terse on-phone email exchange with the maker; and then the taxi was late and I stood in the heavy drizzle with my hair getting bigger by the moment (rain gives me an early-seventies Leo Sayer look) and a mid-level anxiety about missing the train. Not the mellow, I’m a cosmic C21st pilgrim vibe I’d hoped for. Nary a scallop-shell of quiet.

Instead, nervousnesses jostled inside me. I’d had to replace my Scarpas recently because of a Goretex failure, and the new ones weren’t worn in. Would my feet turn into one (or two, I suppose) giant open sore(s)? Would the other pilgrims be lean, lo-packing types who’d forge ahead, leaving me whimpering and disconsolate in their wake? Had I forgotten some crucial piece of kit? What if I left my boot bag on the train? Could I negotiate Birmingham New Street without an access of rage, horror and existential despair? How would I change into my tankini in a field full of strangers and cows? And would I meet a Prioress or a Wife of Bath, a dodgy Pardoner, a thrilling Knight? What tales might we tell, and be a part of? Living close alongside the fears was—as so often—excitement. I was off on thing 4, a real adventure.

For the occasional passenger/customer/victim/whatever Virgin is calling us these days, accepting that you might well be late and/or spend at least part of the journey straddling the vestibule and the aisle with the automatic door ramming you in the shoulder every 48 seconds, is simply part of the experience (and is, of course, very different from the trials of the commuter, for whom such irritation must be a sore, re-opened daily). When I can achieve this acceptance, I find a real bliss in train travel, in handing over responsibility. I’m not in charge. There are no important decisions to be made by me, no burden of choice: how lovely. I can be, not do—simply allow the lush, rain-washed landscape to roll past, and let my mind empty.

And that sense of surrender, of taking my hands off the wheel, turned out to be one of the central joys of the pilgrimage as a whole. My geography is so shamefully poor that I wasn’t really that clear where Frome is, nor had I given the itinerary more than a cursory glance. Approx. twelve miles a day, swimming, lots of water… that was all fine. Someone else was on it. Hence it was with a mind still empty of information and imperatives that I pitched up the following morning at the café where we were to gather. So rare to be able to be in this state, and so blissful. I turn up, and that is enough. 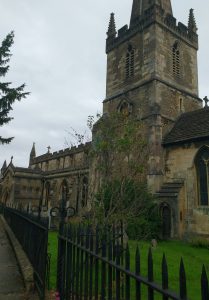 We began with a walk to the church in Frome, where we wandered, inhaled the smell of holiness, time and dust, and were introduced to the idea of circumambulation and how it makes holy that which is circumambulated. Apparently, this reverential circling and—literally—roundabout approach is a feature of the holy journey in many traditions. Due to the deactivation of my left brain, I don’t remember the details, but something in me deeply recognised the truthfulness of this. The approach is part of what makes the centre what it is. I was put in mind of experiences and relationships at which I have grabbed, or tried to grab, and failed to “get” the grabbed-for thing. That which we snatch, we don’t respect, revere or value enough, and cannot ever be what we’d hoped. (Macbeth would be nodding about this, I reckon.)

Guy and Will, the PilgrimMeisters (if that isn’t an oxymoron), described pilgrimage as “walking with intention”. I wasn’t entirely clear what mine was, beyond that it was something to do with letting go of the old, making room for the new; but in my current, deliciously relaxed mood, I figured that was good enough. We took part in a quietly lovely ceremony round the font: names, eye-contact, the learning of a simple, plaintive song (for water likes to be sung to), and the distribution of small, antique silver coins which we could carry for the journey and then offer to Sulis when we got to her place (water gods also like silver, apparently, and none of your modern toxic-to-aquatic-life stuff: they’re after the real thing).* Then it was outside for pack-shouldering (I didn’t hate mine, yet); the choosing of staffs—essential pilgrim kit (of which, more later); and a first taste of (suitably filtered) holy water. Time for the off! Now, where had I packed the true valour… 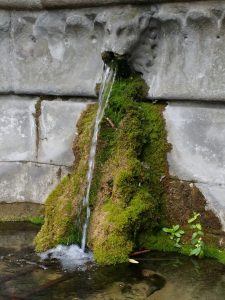 *The pilgrimage was organised by the British Pilgrimage Trust. Find out more by following the link.
**See ‘Water’ for a reminder of how something about water speaks even to those souls who rage at, lament for, and miss so terribly, the comforts of faith.

1 Comment on thing 4: ‘so pricketh hem Natur in hir corages…’: a water pilgrimage (part i)