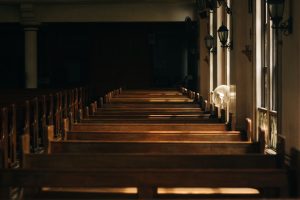 I’ve been singing in choirs since I was about 7 (not continuously, obviously), and this has frequently involved doing gigs in churches. This might mean the lavish, Catholic, every-possible-surface-hand-ornamented-in-gold dazzle of a tiny church tucked away in deepest Manchester, or the solid, redbrick splendour of Liverpool Cathedral; the centuries-old dust of an isolated church in the Dales or the sound-swallowing, thickly-carpeted, efficiently-heated modern building in town where comfy chairs are crammed in amongst the accoutrements of the Worship Band. Churches are so wonderfully various.

This Saturday found me beetling down the M6 towards Manchester, in company with an emergency tenor (in choirs, as in life, there are rarely enough men) and heading for a gig in Chorley. David and I reflected on the fact that this whole endeavour, absolutely standard for us, would seem very odd to someone not in Choirworld. Clay pigeon shooting, LARPing, off-road rallying, geocaching: each of these activities—so unappealing to me—will have its kit, its routines, its regular experiences; and each would be as odd and “other” to me as this hopping around trying to get into your tights and adjust your bowtie/straps (delete as inapplicable) would be to a non-singer. People, like churches, are so wonderfully various. 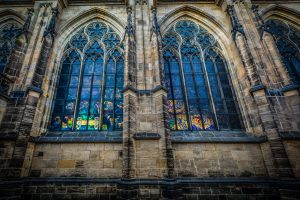 We arrived at the venue and caught the end of the rehearsal of the young people’s choir with whom we were sharing the gig (giggling, self-consciousness, Disney medley, lots of hair and the pure, straight sound of young voices). We ran though the piece we were doing together (more giggling, nudging and exchanging of glances); next was our own rehearsal, starting with a lot of faffing about working out where to stand (if the different parts can’t hear each other you’re asking for trouble, so this, though tiresome, is important). We worked through the programme: some spirituals, gorgeous Holst folk songs, stuff from the Great American Songbook, and a selection of what I call Cheesy Pleasers. At gigs involving more serious works, there’s a long moment after you finish singing, and before the applause starts, while people return from the collective trance or rapture which the music has effected. This wasn’t one to be one of those gigs. Instead it offered the alternative prospect of smiling faces, toes tapping and people mouthing words along with us—a wholly different but equally pleasurable experience of evoking memories and warm emotions, as well as entertaining. Programmes, like people and churches, are so wonderfully various.

The sandwiches/cold church hall/trying to get into your tights bit happens in what I call the interregnum—ie the bit between the end of the rehearsal and the beginning of the concert. I’d had a quick run-through of my solo (my first for this choir) at the end of the rehearsal proper, and although the acoustic was one which helped anyone sound talented, nonetheless I was feeling shaky. At the best of times I find the interregnum a strange period—it’s hard to settle to anything—and tonight I could feel a sort of nervy, incongruent jolliness bubbling up in me. In addition, because I haven’t been singing with this choir for very long, I really struggled to relax, to flow into the interregnum conversations and food-sharing… aargh. Nervy. Awkward. Time to put on some make up! As I began doing so, someone spotted my eyelash curlers, which started a conversation, which led to one of the basses deciding to give them a try (he found it slightly weird to feel his (annoyingly long and lush) eyelashes so curled that they brushed the skin just below his eyebrow); and then I managed to blurt out to the first someone that I was feeling nervous about singing in front of a room full of teenagers, and she was kind and lovely, pointing out that they were “just people”: and lo, I was feeling grounded again—more human, less on my own. Feeling safe enough to be real about how I feel is so redemptive, so necessary. And all because of eyelash curlers. The things which enable connection are, like churches, people and programmes, so wonderfully various. 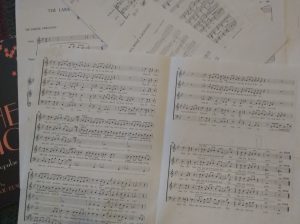 In the event, the concert went pretty well. You often make new mistakes in live performance that you’ve never made in rehearsal, and get right the bits with which you’ve struggled; and so it was tonight. The solo, not perfect, was ok-enough, especially given that I was shaking so much I couldn’t hold the copy; and the youth choir sang really well, even managing to cope with hearing a choir of Grown Ups in posh dresses singing a piece called “Let’s do it”. The audience seemed appreciative, and the music did its wondrous thing of uniting a building full of heterogeneous individuals in a shared experience. So wonderfully various, we temporarily—and equally wonderfully—became one.

But for me, there is still more magic about music—and it is about connection. Yes, music connects you to yourself (if you let it), and to a way to understand the world of human experience and feeling. But it also fosters intimacy between performers. There’s something about doing a gig with others which brings you closer: you’ve had a shared experience, and it changes you, and how you feel about each other. (I imagine people who go LARPing, or rallying, or geocaching, or whatever, have a cognate experience of bonding.) There is, too, a strange intimacy to being conducted. To surrender to the music and perform it fully, you have to commit yourself to it, put your whole self into it, be visible; so that there is an electricity, a stripped-wire-connectedness when, at fleeting moments in the performance, your eyes meet those of the conductor. You have to trust her; and the really inspiring conductor, in his turn, has to trust you—be prepared nakedly to be herself in front of you, fully inhabiting himself and the music. That is an awful lot of nakedness. And in church, too.

There’s another thing. I realise, of course, that having a spouse/partner/family does not of itself guarantee intimacy or a sense of deep belonging. But I also know that my lack of family and/or what is known in Scotland as a “bidie-in” is what makes experiences of connection and integration especially precious to me.* When I take part in a gig, then, the sense of belonging with people and being part of a greater whole is, though temporary, both meaningful and important. I feel slightly shy saying this, as though there’s something shameful about admitting how much it matters. But it does. The magic of making melody with others feels essential to me. I’m so damn grateful for it.

*For more on the importance of shared experiences, and relationships (as opposed to Relationships), see ‘Not Love Perhaps’, here.