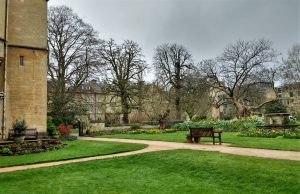 ‘They are not long, the days of wine and roses.’* This is, unfortunately, true. The hours of wine and rowdies, however, can feel very long indeed. Welcome to Coach A, the Quiet Zone.

I was sharing the carriage with approximately 743 On-Train Revellers—memory may have distorted this slightly—and was feeling hot-flushy, claustrophobic and overwhelmed. All the usual signs were there: a commitment to noise and Having A Good Time, standing in the aisle, heavy daytime drinking coz-we’re-on-holiday, a lot of very loud laughing (often with a sort of 40-a-day, Sid James wheeze) and a tendency to saccharine sentimentality of the I really really love you kind. As you may infer from this somewhat uncharitable description, along with my overwhelm I was feeling both intimidated and annoyed. I was struggling, a lot.

For a couple of days I’d had a delicious, bubbling excitement about my upcoming adventure. I’d booked a place on a course down in Oxfordshire and, as I’d never been to Oxford, thought I’d have a day there before heading off to Charney Bassett (which I know sounds like a destination from Agatha Christie but is, in fact, where the course was taking place). It’s only in the last few years that I’ve felt confident about travelling alone, and being in new places, and I was excited both about the trip and about being excited itself. It’s good when you feel a sense of trust in yourself. Under the influence of the OTRs, however, the wonderful buoyancy was ebbing. I did my best, though. I kept my head down, metaphorically speaking, looking out of the window and writing in my journal and, for some reason, really enjoying the fact that the zipped-cardiganed older gentleman opposite me had, in front of him on the table, a freezer bag containing a modest handful of Quality Street. By text my mum offered me the encouraging thought that the OTRs were probably going to Blackpool. When they did eventually “de-train” at Wigan, very British glances of relief were exchanged around the carriage, and the journey proceeded in a quiet so glorious it was audible.

I myself then detrained, at Wolverhampton, where I recognised the waiting room I’d been in on my last trip dahn Sarf (a visit to a friend from my Cambridge days). This gave me a strange but quietly pleasing sense of encountering my own history, like Dr Who crossing his own timeline but with less danger of generating dangerous rifts in the space-time continuum. There was more quiet pleasure, too, at seeing the names Banbury and Radley on the Oxford-train information sign: these were places I’d heard of, and now I was actually going! Last year, on a trip to Norway, I was both delighted and incredulous to find myself boarding something billed as the “Arctic Circle Train”. My reaction now was different in scale but similar in nature—a thrill at widening my life, at encountering more of the world. Everywhere is strange new land to someone. 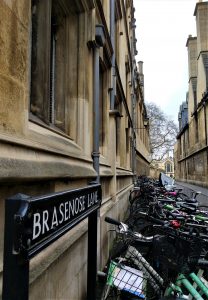 A couple of hours later I was shouldering my borrowed pack and leaving Oxford station. Giving only a cursory glance at Google maps on my phone, I did that thing which is the 21st-century equivalent of refusing to look at your London A-Z because it betrays your foreignness—ie, striding off confidently, but in what turned out to be the wrong direction. I corrected myself. Botley Road (Morse had been there!). Bridge Street (my dear friend Celia lived there in her student days!). And here I was at the Air B and B, letting myself in, meeting the house cat, settling myself into the room. A quick text to the friend I was meeting for supper, and then off out into the damp, misty, Oxford dusk.

Half an hour later, and feeling a low hum of self-trust after some successful micro-navving, I walked into the pub where I was meeting Hannah and immediately felt stunned. It was a wall of sound, and not in a groovy Phil Spector way: I found the sheer volume and number of loud, confident, predominantly young voices booming round a small space just too much to handle. I was surprised to find I was fine sitting alone with a drink while I waited, but soon realised that this was because I felt invisible. Before the trip I’d had a sense that this Thing might plug me in to some of the feelings about being no longer young which prompted the whole what the afternoon knows project: and here they were. A middle-aged woman alone in a place for bright young things who still had world enough, and time (or thought they did, which perhaps amounts to the same thing). It was lovely seeing Hannah, with whom I’d done a stretch at Waterstone’s (she’s now in charge of a section at Blackwells, and her mum is a cherished member of the Kendal 42 group)** but my pleasure at spending time with her sat atop a deeper, queasy disquiet. I knew there were tears to be shed. 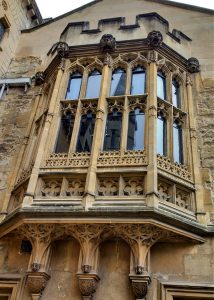 And yes, there were. Walking round the glory of mediaeval Oxford inevitably reminded me of Cambridge. Oriel windows, mullioned windows, porters, panelling, gardens, grotesques, carvings, cloisters, courts, lawns and general loveliness… the beauty filled me with delight but also with sorrow. All those long, uncompromising walls—walls of warm, honey-coloured stone, yes, but walls nonetheless, broken only by hefty, studded doors and the odd padlocked gate affording a glimpse of the sanctum sanctorum. As a student I’d been free to pass where I pleased; now it was strange to be shut out of most places, a Visitor, not a Member—Town, not Gown. It was strange to be not-young where the young were; to feel not a part of a collective Life of the Mind; to feel no sense of purpose or connection, to… oh yes, here we are again: to have quite such a profound sense of not belonging. And as well as the current not-belonging there was the different sadness that, even way back then when I did belong, I didn’t feel like I did. Like many others, as I subsequently discovered—Impostor Syndrome now being recognised as a thing—I spent most of my time at Cambridge waiting to be found out and thrown out. I scuttled around, awkward and anxious, unable to Make The Most of It, barely even aware that I was in a beautiful and historic place. It seems like a sort of retrospective FOMO—FIMO, if you will. Fear I Missed Out. Whatever that might mean.

Because I’m aware, of course, of how many fantasies and projections are involved in all this. I know, intellectually, that what was going on inside many of these BYTs—or indeed the BYTs with whom I shared my time at Cambridge—was probably not the riot of confidence, pleasure and intellectual zenith that I projected. I also know that I’m happier, calmer, more confident, more fulfilled and, well, more all sorts of good things than I was when I was 19. So why did I eventually have to surrender to deep, diaphragm-wracking sobs in the privacy of Trinity Gardens while the College Squirrels bore phlegmatic witness? I think it’s because somewhere at the heart of the more neurotic fantasies/projections persists a truth about numbers which cannot be therapised away. They are not long, the days of wine and roses…

But the wonderful thing about allowing yourself to experience your own pain—really to experience it, to feel as bad as you feel, no matter how “first-world” or “selfish” it may seem—is that it allows you to get yourself out of the way. Once you’ve compassionated yourself as fully as you need to, you’re freed up to see more clearly, and see others with more compassion, too.*** Thus, after a while, I exchanged farewell glances with Head Squirrel and left, exhausted but calm, in search of a cup of tea. A stroll round the Ashmolean (where I was delighted to discover one of the paintings I’d seen in the Caravaggio exhibition); a last, contented wander through the beautiful streets: and then I collected my rucksack and headed back to the station. It was time for part (ii) of the long weekend, Charney Bassett and Manor: bodies in the library and Professor Plum in the Billiard room with the candlestick…

*You can read the poem the post’s title comes from here.

***For more on plumbing the depths of your experience, and kindness, see ‘a spell of weather’, here.