It was one of those days Messrs Ordnance & Survey tend to put on the covers of their 1:25,000s: deep green hills, and water sparkling under a sky whose few meringues of cloud only emphasised the depth of the blue.

Usually, stopping for a squint at the map during a trudge across the rain-wreathed landscape, your cag hood rustling about your ears and your face screwed up against the wind, you regard these images with a sort of resentful disbelief. (I call this look ‘the Kendal hunch’, and you sport it for much of the year when you live in Cumbria.) But today the OS dream was reality, and we were up early to enjoy it, knowing that a long chunk of walking lay ahead. Breakfast done—’Would you like The Full Cumbrian?’—we acquired our packed lunches and crammed them into our rucksacks. I may have been 51 that day but I was still chuffed to find I’d been issued a bag of crisps along with with my sandwiches (‘Wow, thanks, mum!’); the apples were less exciting, but we were in the early stages of denial and packed them anyway. Fresh air plus much walking equals sense of vindication in re: cooked breakfasts and high-carb eating (though I don’t recall ever reading anything about “fat-loading”). But hey, it’s my party and I’ll fry if I want to. 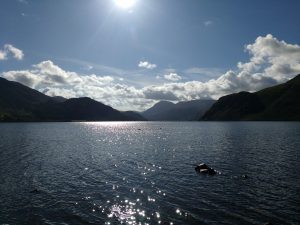 After some faffing about with micro-nav leaving Ennerdale Bridge—Geraldine instructed us to cross the river Ehen (pronounced Ian) but wasn’t clear about which side we were starting from—we were soon on the road towards Ennerdale Water. We shed the C2Cers after a mile or so and thus were alone when we rounded a corner, emerged from some trees and found the beauty of the lake and hills opening out before us in a wide and glorious view. The sun was making a million stars on the ink-blue water, which rippled gently under the lightest of breezes. Behind and to either side the fells rose steeply, craggy here and there but velveted, too, with grass and rich green bracken. There was a little shingly shore and the only sound was the waves plashing softly against the stones. Some geese landed, feet from us, to make it all even more picture-perfect. Bliss. We grinned in sheer contentment about being here, on this day, doing this thing.

Though the water was calling there were miles to go before we slept, so we saddled up again, and followed the gravelly, stony track along the northern shore. Pretty soon I became aware that, despite the prophylactic plastering I’d done before we left the hotel, what was going on with my right little toe was rapidly turning into a right little toe Situation. The wodge of tape round the toe, intended to help the RLTS, was causing my foot to sit differently inside the boot and thus leading to a secondary Right Heel Situation; and by the time we were onto the long stretch of track into the heart of Ennerdale I knew I was in trouble. I was cross and resentful—never had any blisters before with these boots—and also had a slight sense of shame. Would I be judged as a lightweight by any fellow/passing walkers? Was I, in fact, a lightweight, attempting something I couldn’t really manage?

Just as we passed the Ennerdale Youth Hostel, I finally had to get real. I stopped, leaned my pack against the rather lovely dry stone, moss-covered wall, and de-booted, applying one of the special blister plasters I had with me. Within two steps, however, the RHS spiked into the red zone and, on investigation, I discovered that this supposedly purpose-built, immovable plaster had slid straight down my heel, ripping the skin completely off the nascent blister and leaving a big raw red patch. No! This was unfair! But Margaret stepped up to the plate, improvising a splendid—and, it turned out, very effective—field dressing from stuff she had in her first aid kit. Neither of us had scissors, so she tore pads with her bare hands, ripped tape with her teeth, and generally lashed my heel back into shape. Impressive! Crucially, she showed no trace of impatience or judgement, which helped me be a bit more compassionate with myself. Just the sort of person I wanted in this situation; though even more serendipitous, of course, was the advent of the day’s first Man Who Cleared Things Up For Us. ‘Blisters’, he said, as he passed by. Be proud of me that I didn’t clobber him with my staff. 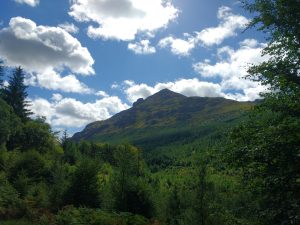 But once I’d worked out how to limp in the least painful way, we were fine. There was a long pull through woods—a few patches of birch and other broadleaf, but mostly evergreen—involving a very gradual ascent away from the River Liza and the valley bottom, which fell away from us to the right as we climbed. The sun was warm, the road surface dry and quite dusty underfoot. There were bits of conversation and bits of silence, during which the scuffing of feet and the tapping of my staff and Margaret’s pole were the rhythmic and soothing soundtrack. There may have been miles to go but there was also the bliss of no ‘promises to keep’ and this, I realised, was part of the refreshment the pilgrimage was offering.* Nothing to do except keep putting one foot in front of the other. The world narrowed, and thus widened. Wonderful.

As we got further up the dale the sense of remoteness increased. One or two other walkers passed, going in the opposite direction, but mostly it was just us, the track, the plantations and the rising fells. My geography is such that I had no real comprehension of the landscape around us, but I noticed the odd, bare, craggy formations at the top of the fell to our right—one of which reminded me of stegosaurus plates—and the long, steep scree slopes on the fells to our left. Huge chunks of rock deposited by the glacier lay here and there on the valley bottom (apparently these are called ‘eccentrics’, which pleases me greatly). 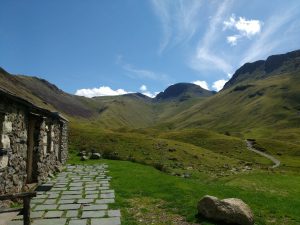 Determined to get to Black Sail before stopping for lunch, we pressed on through this splendour, and eventually the bothy came into sight, tucked in at the foot of the fell, ludicrously small, its slate a warm grey against the green. We dropped onto the benches in front of it, and set to it with lunch, working out what we could eat, what we could jettison. We’d seen the climb ahead. 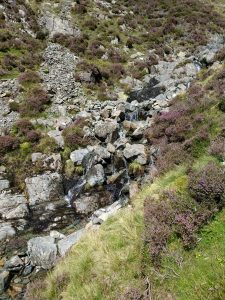 The threat of more mansplaining meant we didn’t linger over lunch, though we did listen when Geraldine warned us that neither Liza, coming down through Windy Gap, nor Tongue Beck, tumbling to its left, was our way out of Ennerdale. Obeying her, we took the grassy track round the left flank of the hill, to where Loft Beck danced delightfully down the steep fellside, the waters sparkling as they fell over the stones and forming small, diamond-bright pools. Beautiful… but, oh, friends, this was steep. This was hard going. A tanned, muscle-vested 20-something cruised past us as we puffed and stumbled our way up this rocky path, which was narrow, and resembled nothing so much as an endless-seeming stone staircase. 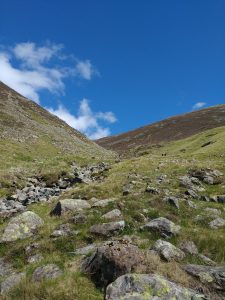 I was extremely grateful for my staff, both for balance and for the way it allowed my triceps to do some of the work. Margaret muttered and swore at the Beck, resenting its playful ease of descent; I chuntered about how, if we’d been exercising at the gym, we would long since have stopped, had a well-earned shower and be at home resting. But there was nowhere to go except onwards and upwards: this wasn’t some ghastly motivational legend but simply the truth. One of the things running has shown me is that, while my instinct is to tear at any obstacle and try to power through it as fast as I can, sometimes that just isn’t possible, and I have to do the tortoise thing instead of the hare;—and that, if I do this, I can often do more than I think I can. (It’s almost as if wisdom is, y’know, wise.) And so it was here. We did get to the top, and it was profoundly satisfying. 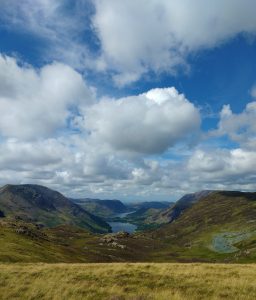 We were realising that one of the things Geraldine wasn’t too hot on was distance, and were slightly surprised by the length of the next section, which followed a cairned path over Brandreth Fell and afforded stunning views across the Western fells. We could see Ennerdale Water, Buttermere, Crummock Water (where I’d been swimming only a few weeks before); the Helvellyn ridge was in view, and the Great Gable path wandered off to the right. By this point my legs weren’t just the Frankenlimbs of yesterday but felt as though they were being remotely operated by someone who could see neither me nor the terrain. I feared they would hinge backwards at any point—as a bird’s seem to do—and drop me to the ground. On top of that there persisted the RLTS and the RHS. Nonetheless, I was full of gladness. I had that feeling of ownership of the fell which you only get by walking it. My eyes filling, I had an intense and inward moment of pride at having made it, and joy at the wonder of the world about me. We were tiny and transient but, for this moment, had our place in this vast glory. Lucky us. Lucky, lucky us.

The long descent to the Honister Pass was slow and painful: another very rocky path, steep, tricky underfoot and tiring, in part because it required you to concentrate so much on picking your way. Margaret shared her precious tea: we passed the flask-lid between us in a sort of wordless, felltop communion before staggering silently, determinedly down to the Honister Slate Mine “Experience” where more tea fortified us for the last section. Geraldine had warned of the need to be ‘gymnastic’ during a scramble over rocks, and I’d been thinking about this, on and off, for most of the day; but in the event it was much easier than she’d led us to believe, and we arrived unscathed—or at least without further damage—at Borrowdale Youth Hostel. The room felt rudimentary after last night’s luxury; but the experience of putting the pack down, showering and having a beer before supper was just as blissful.

Margaret managed to stay conscious long enough to eat but retired soon afterwards. I stayed up for a bit, writing my journal at a table in the communal area and listening to two young men Clearing Things Up for each other. They used their phones to facilitate what I call data jousting: ‘Do you know where this mountain is, then?’ (sliding photo across); ‘Yes, I did the north face in 2007’ (or whatever). It wasn’t so much conversation as pronouncements—billboards? buttresses? barriers?—brandished, turn and turn about, in the general direction of the other. Along with Man B I learned an incredible amount about Man A’s use of his heart-rate monitor. Though the sheer level of detail nailed me to my seat by its overwhelming, incapacitating dullness, eventually I managed to shake myself out of the trance of boredom and get to my feet. Walking slightly stiff-legged upstairs to bed, I wondered anew at the difference between male and female discourse, but hadn’t formed any clear thoughts before I fell into a delicious, thoroughly-earned sleep.

What a very happy birthday, to me. 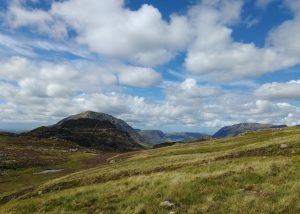 *You can read the poem from which the post’s title comes here.