Framily. Prinks. Twixtmas. Hmmm. Every so often I hear a new word which makes me cringe but which I have to admit does usefully convey meaning.

Okay, prinking (= pre-drinking = priming with cheap[er] at-home alcohol in order to achieve required degree of intoxication while out, without having to take out a loan) isn’t often a thing I need to talk about, but the point still stands. So I find myself telling you that during Twixtmas this year—or, gee, I guess I mean last year now—I wanted to do something which wasn’t about tinsel and mission: merrymaking, but which would still be fun.

With some framily members (might as well get them all in while I’m here) I had a most lovely evening of one-to-a-part singing: round a fire, with talking, laughing, mince pies with brandy butter and my first martini in ages (thank you, Oliver: your facility with the shaker is noteworthy). But I wanted to do something with my family, too, so I suggested we visited Mary King’s Close, which had been an early entry on the Thing list. I didn’t really know much about it beyond some vague notion of streets buried under a street, with some darker suggestions of The People being walled up to die there by The Man during the Plague years. Bit spooky, bit eerie: well in the tradition of the Christmas ghost story. Mum found us a great new vegetarian restaurant to try, and generously offered to treat us all. The shape of a Twixtmas outing emerged.

Thus Richard, Susie, Mum and I found ourselves at the Park & Ride at Halbeath, shivering in the chill wind sweeping off the Forth while we waited for the Edinburgh bus. The cold may have had something to do with the alacrity with which we piled onto the bus when it came; but as it swooped and swung its way round a vom-inducing series of roundabouts—there’s something mildly disconcerting about how far out long vehicles have to go to negotiate bends and corners—we realised we’d got on the wrong bus. Arse. This was the Stagecoach equivalent of the milk train and we were going to be a lot later than we planned. Still, the driver had the heating cranked up to max and there was nothing to do but sit there, sweating gently, and see what happened. Time to stop worrying and concentrate on not throwing up my breakfast.

Having mastered the Zen of public transport we de-bussed (in for a penny) in Edinburgh and found a cab which took us to David Bann’s, where we waited for a while outside a locked front door. The staff member who eventually let us in had clearly passed with honours his Exuding Silent Disdain module at Catering College, but our waitress was charming and the food really was good. How pleasant it is to have money, heigh-ho!:* such a treat to feel genuinely torn between interesting options rather than facing the usual tired goat’s cheese tart v beany tomato ragout dilemma. I had gnocchi in mushroom and smoked cheese sauce, parsnip pudding with potato and swede dauphinoise, and even managed to shoehorn in ginger and lime ice cream with orange cake. None of us is given to taking photos of our food so all I can do is tell you it was really tasty, the portions were generous without being overwhelming, and even the funky organic wholemeal cola was delicious. David Bann: definitely a keeper.

Moderately bloated, we emerged onto the cobbled Edinburgh street where Susie demonstrated how stylishly adept she is at hailing a taxi. Being whisked around a city in a black cab is an unusual and luxurious experience for me (how pleasant it is…) and we arrived at The Real Mary King’s Close** just in time for the start of our tour. Our guide was dressed in Costume: red frock coat, waistcoat, knee britches; from his belt a leather pouch and a plastic walkie-talkie dangled in uneasy juxtaposition. But my fears about cheesy unconvincing Period Touches were quieted once he started talking. He had that combination of ease with and passion for his material which is a delightful thing to be around. 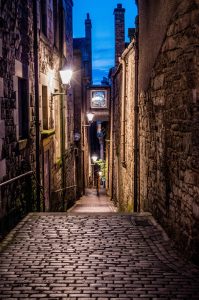 Because of the position and (historically) small footprint of the city, Edinburgh’s wynds and closes—alleyways and courtyards off a main road, the former public, the latter privately owned—tended to be narrow, with tenement housing built high on either side. We learned that ‘back in the 1600s, Mary King’s Close and other neighbouring Closes were at the heart of Edinburgh’s busiest and most vibrant streets; open to the skies and bustling with traders selling their wares to the Old Town’s residents’. Or, as Cilla might have put it, there were once a lorra lorra people crammed in. With multiple families often inhabiting one small room, people were stacked up like battery hens. And given the sanitation arrangements—there were appointed times of day when your soil bucket could be emptied out of the window into the narrow street below, which was effectively an open sewer—those people probably had about the same chance as the hens of being healthy (never mind happy). No wonder plague, cholera and other diseases took easy hold here. The poor lived lower down: darker, smellier, diseas-ier; the rich, higher up: better air, more light, less stink. How pleasant it is…

Our guide led us through a series of dimly-lit, rough stone spaces (I’m trying not to say warren or labyrinth, but there was a lot of winding about). Here, Mary Queen of Scots spent her last night in Scotland; there, we could see rough beds and models of bubo-bloated plague victims. Video screens done up as picture frames showed Close residents telling their stories. Through here was a place where livestock once was housed; another small section still had its original spit-and-horsehair plasterwork (or something!); and one bedroom had a shrine of soft toys left by visitors for the child’s ghost which allegedly lives there.

The guide was keen to dispel the urban myth about the helpless being walled up and left to die. Though the street was quarantined, provisions were brought in for the residents until the last of them chose to leave in 1645. Decades later, residents and traders did return—the last, a saw-maker, left as late as 1902—but the C17th city authorities decided to build the new Exchange building (later the City Chambers) there in the middle of the Old Town, roofing over the Close and building on top of it. The rooms we visited all had a low, arched ceiling, designed to distribute the weight of the buildings above. When at last we got onto a section of the Close itself—

cobbled, hung with washing lines, and sloping steeply down into the darkness—we could look up and see the floor of the Chambers above. This was, quite literally, what Edinburgh’s subsequent flourishing, and the Enlightenment itself, were built on. Bring on the New Town’s quiet order and beauty. How pleasant.

As the guide spoke I felt just the tiniest whiff of disappointment about learning the less lurid truth about the Close. What’s that about, beyond an unpleasant if involuntary response to sensationalism? Maybe it’s to do with how comforting it is to think that Bad Things happened in The Past (and therefore not now) and are done by Other People (and therefore not by me, or us). Being reminded yet again that—like everyone else—I’m one of the Jung ones, trying not to know about my own Shadow, is chastening. But important.

I was disappointed, too, to find that we were at the end of the tour, sooner than I’d expected. I felt I hadn’t really been able to be there: so much information was conveyed that it was hard to take in the place itself. It was a unique and interesting experience, and I’m really glad we went, but I was surprised by the absence of the Twixtmas spook vibes. I’m sure it’s different when you’re on your own. You can hire the Close for ‘private investigation’ as well as for corporate events; and while I can’t help boggling a bit at what kind of Corporate event might be held down there—teambuilding in the tenements, anyone?—I’d love a chance to see it with fewer people there, and in a smaller group. But prices start at ten times the Tour ticket price. How pleasant it is to have money…

*You can read the poem of which this is the refrain here.

**You can’t take pictures and they didn’t respond to my request for any publicity shots, so sorry, no pictures. You can have a look at the promo for MKC here, though, and a more lurid account here. The choice is yours!