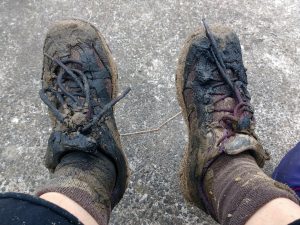 The ‘Yikes’ moment: when Shaggy and Scoob have been running so fast, legs ablur, that they don’t notice they’ve gone off the edge of the cliff—then realise and, with a wail, start plummeting. I love that: it captures an emotional experience I recognise. But, oh dear. If I’m giving existential readings of cartoons, maybe I’ve been a counsellor too long. Maybe I’m feeling unusual.

When Suan and I got back to the cottage I felt myself fall—in slo-mo at first, as though my good mood was s-l-o-w-l-y starting to disintegrate from beneath me while I scrabbled to hold on to it, and then in an accelerating plunge with a cartoon-y sort of “doooof” as I hit the bottom. My internal granny had her hands on her hips: ‘You’re never satisfied. You want company and when you get it, you’re still not happy. There’s no pleasing you’. And it did seem weird. One of my best friends was here for a couple of days’ play, but suddenly I was panicking that this was a really bad move, that I’d made a mistake and messed up the whole holiday. What the hell was going on?

Then I got it. Having Suan here joined up holiday life and real life, with all its current worries, fears and impending-doom-y anticipatory griefs. I’d shaken all that off for 24 hours’ of bold adventurer solitude, and now here it all was, back again—and I resented its reappearance.* Fortunately Suan is that precious kind of friend to whom I could actually say ‘I’m feeling quite bad that you’re here,’ (with a bit more explanation than that!) and she accepted it—helped me make sense of it. Oh, the precious gift of being “got”. 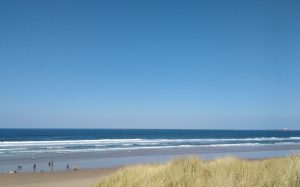 We took late luncheon at 3 (more or less) and spent the rest of the afternoon wandering the shore around Bamburgh: a thigh-testing if brief trudge through dunes to reach the long flat expanse of golden sand, the castle behind us—who was he so frightened of, the person who built it?—rearing its mass against the wedgewood sky. We had tea and chocolate chip shortbread (perfectly judged bread/chip ratio) at a Bamburgh tea rooms before going home via Seahouses, where we dealt with the fuel and wood situation so I could have a lesson in lighting fires. A quiet, companionable evening, and early bed to be up betimes for Lindisfarne. 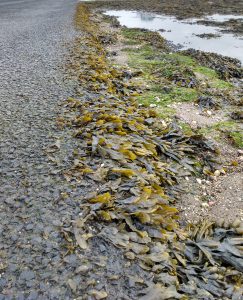 Islands are special—and extra special, perhaps, when they are sometimes accessible, and sometimes not, with the tides in charge and humans having no say in it. What with having done a couple of pilgrimages I was keen to walk across the sands, rather than get the bus or drive across the causeway, so—once we’d managed to turn right onto the A1, which was a stressful, horns honking, Formula 1 engines whining sort of experience—we left the car at a garage and walked along the road towards the coast. This first, roadside section was slightly dull—I was eager to see the island and kept breaking into a sort of scamper before remembering what a bad idea this is without a sports bra on—but we did see an ectopic, Thomas the Tank Engine style train struck in someone’s garden, and some rather beautiful giant (wild?) snowdrops. Eventually we came over the brow of the road and there was Lindisfarne ahead of us. Exciting! There was something very other about seaweed on the edge of a tarmacked road. As we crossed the river we could see the first posts which marked the pilgrims’ way and, pausing for a brief word with some postgrad students who were kneeling in the mud happily doing who knows what with some sciencey sort of kit, we stepped off the road and onto the sands.

Within about 5 steps I was wondering if this was a bad idea. My walking trainers (TS: 3) instantly acquired a thick layer of slippery gloop, and I remembered I don’t usually wear them except in very dry conditions because they have some kind of banana skin, anti-grip sole on them which makes wet terrain very treacherous. Doing my lift-high-the-foot/I’ve-wet-my-pants walk I proceeded with some caution, Suan doing so some steps behind me. After a while the mud felt firmer underfoot and, relaxing, we were able to attend to what was around us. 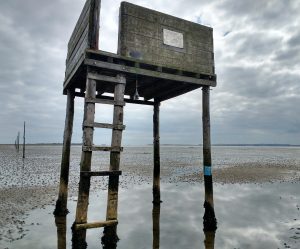 The line of posts led across the expanse of dun coloured, wetly glinting mud which had been sculpted into endless ripples by the outgoing tide. It was dotted with the casts of a squillion worms and bivalve shells were scattered here and there, too. There were strands of weed and patches of grass, and stretches where water lay in a thin film, reflecting the mostly overcast sky. Cries of shore birds supplied a slightly melancholy soundtrack, and we spotted a curlew pacing and probing, its improbably long beak making all kinds of sense when seen in action. We noticed that a refuge point some way out had, hanging from it, an air plant in a teardrop-shaped glass container, and wondered if there were sofa and tv up in the refuge, to go with the pot plant. 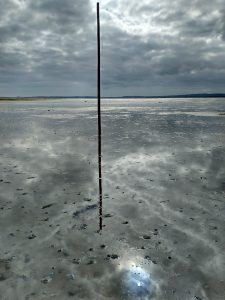 Treading over-confidently across a section which looked more solid than it actually was, I found myself up to the ankles in goo, and sliding deeper. I did a version of that self-conscious “Hup” noise you make when you trip in the street, but managed to get onto slightly firmer mud. Then I heard a distress noise behind me and turned to see Suan on her hands and knees with one foot and leg deeply sucked down into the mire. With my gammy shoulder I was unable to lift her or do anything helpful. I made small compassionate noises and plucked feebly at the back of her jacket as she struggled. Suddenly the notion of refuge was making much more sense. I could only admire the aplomb with which she accepted the situation, worked out what to do and eventually managed to get her foot free of her trainer, leaving it stuck some distance down in the deep, black-streaked, stinking mud. 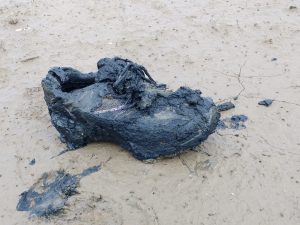 And I mean, really stinking. ‘What is that?’ I asked. ‘Oil and fish shit,’ she replied crisply, digging out the trainer with her hands before slowly, and with a impressive lack of complaint, putting her enslimed, socked foot back into the reeking shoe. I’m not generally a fan of “wipes” but, like refuge a moment ago, suddenly they seemed like a great idea (though it would have required several tablecloth-sized wipes to begin to deal with the situation). A pair of good quality rubber boots was also an appealing thought but, we were where we were; and so we slithered on. After a while I realised there was something freeing in all of this: we were both tramping steadily through water and mud around which we might have minced much more gingerly twenty minutes ago. We were earning our scallop shells, and certainly earned the tea we eventually enjoyed in Lindisfarne village, where we breathed out a bit and watched the sparrows fly in and out of a large, densely-populated privet bush. 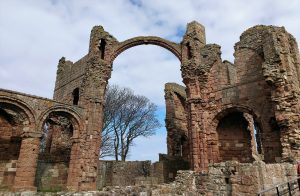 It’s never good when you can actually smell yourself and, in that I had to expend a certain amount of my available energy not noticing how chilled, filthy and stenchful I was, our noisesomeness did colour (flavour?) the next few hours on the island. But still, the Priory museum was interesting and informative without being overwhelming, and the ruins themselves so well curated it was much easier than it sometimes is at such places to get a mental picture of what it might have looked like. The modern sculpture of monks carrying St 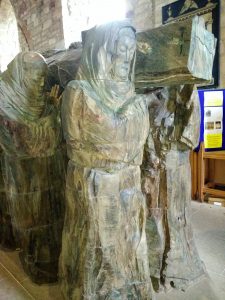 Cuthbert’s coffin in St Mary’s church was most moving: the differing expressions on the monks’ faces, the sorrow and love in their bearing. It was a beautiful thing.

We climbed to the lookout thingie (didn’t catch what it was called) and enjoyed the 360° view—seals, mountains, encroaching tide—before strolling to the harbour to look at the boats-turned-into-sheds and the view over to the castle. There was too much Lindisfarne and not enough time to look at it so I had to promise myself I’d be back, sometime, to explore more of it. Relishing the best cheese scone and soup I’ve ever had, out, at the Pilgrim’s Café, I indulged in a fantasy of bringing myself here on a writing retreat, enjoying the solitude and popping down to the Pilgrims for morning coffee, afternoon tea. Maybe a spot of lunch, too… 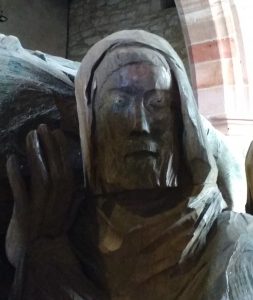 I was full of thoughts. Suan’s mishap on the sands left me with a sense of how unadept I feel at physically looking after others. I wondered if that was something to do with not being a mother, or the nurture I myself received—the school matron once treated with paracetamol a classmate’s dislocated shoulder—or if I was just like that. I wondered, too, about how it was to be a monk there so many hundreds of years ago; how it was for Cuthbert, who loved living as a hermit on a nearby island with nothing between him and God, yet was called to be Abbot and to travel, living out the message of God’s love in a very practical way. What did he think about? What was it like to be him?

I was summoned from these musings by the arrival of the minibus which would take us off the island. As we settled into our seats the (very friendly) driver sniffed the air in a knowing sort of a way. ‘You two walk across?’ he said. I turned to Suan. ‘Can trainers go in the washing machine?’ We came home via the Co-op in Seahouses where I bought some serious detergent. I bought a bottle of wine, too. Not, perhaps, the finest available to humanity; but certainly good enough for a fireside toast, later, to the freshly appreciated, quiet pleasure of being clean. 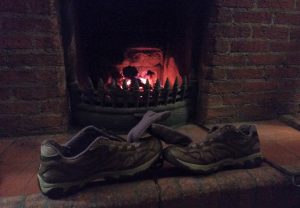 *For more on the sudden remembering of the mercifully forgotten, have a look at ‘Surprised by joy‘ elsewhere on wtak.

4 Comments on thing 37: ‘a delightful weekend in the country’: going on holiday (not by mistake), part (ii)