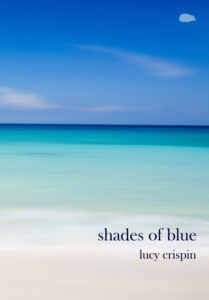 A tree falling in a forest. A book launched during a pandemic. Does either of them make any sound?

As far as I can tell, if answer there be to this question, it’s “yes and no”. There is the basic excitation of the surrounding medium/particles which, if there are receptors, would be translated into sound. But in the absence of receptors, there is no such translation. Ergo, yes and no. Aaargh. I remember now how much philosophy has always really pissed me off. I just don’t have the right kind of brain or temperament for it. As Frank or Pat Butcher might have said, “Leave it!”

But however fart-in-a-hurricane the appearance of one more slim volume might be at the best of times, I do think that without the recent Hardy-esque ‘concatenation of events’ in micro- and macrocosm the publication of shades of blue would have felt like a much bigger deal to me than it actually does. My own particular version of “well, if they let me in the club it’s obviously not a club I’d like to belong to” was once much more habitual than it is now: I don’t think I’d be so liable to minimise my achievements if I wasn’t already overwhelmed. And there’s also the current exacerbation of standard-issue mortality awareness: with Time’s winged chariot so noisily hurrying near and the consequent desire to make my sun run it’s easy to scurry on to the next thing without stopping really to be here.

In addition to this, though, like everyone else I’m in this strange state of transition out of lockdown into something else which no-one really can delineate (least of all those nominally in charge), with all the attendant anxieties and uncertainties that come with not knowing where we are or for how long. Like many others too, I’m in grief. Judging by the fact that the other day I roared in frustration, kicked the sofa and then (in fury at its yieldingness) kicked the door-frame so hard that quite a lot of paint came off it, I guess we could hypothesise that I’m at least visiting the Anger stage. Then I burst into tears because I’d forgotten to put my mask in the washing machine. Yup, I think we can safely say I’m Feeling A Bit Odd. Clients and friends alike are reporting that it’s hard to tell how big anything is. Emotions bulge and recede. Life in a fish-eye lens or hall of mirrors. Strange rage attacks, random acts of frustration, feeling bewilderingly sad and out of control. WTF? people are asking, WTF?

So no wonder it’s hard to tell what I feel about having my book published. During this morning’s walk, as I was thinking about writing this post, I did my best to get a bit clearer on it. I realised I have a kind of notional sadness—about the launch events and readings that were going to happen but then didn’t, and the joyful sharing; not to mention the selling of copies!* But I didn’t actually feel that sadness. Far too many other painful emotions jostling for room inside me.

But I do feel sad that the combo of Inner Critic and Outer Events has meant I’ve not really let myself feel celebratory or proud of myself. Yes, being published may not be the instant access to Nirvana that some childlike part of me magically thought it would be. Nor is it going to change the world. But it is a change in my world, and a thing which two-years-ago me dreamed of but had no idea was possible. Sending poems out into the world has required courage—not as obvious perhaps as that required for abseiling off a church tower, but real nonetheless—and the development of a thicker skin, which only happens through hurts and rubs, the sting and stab of many rejections as well as the thrill of acceptances. Persistently sending stuff out, I’ve needed to act as if I know it’s ok to be me even when I haven’t felt it. And now there is something more of me out in the world: I have the chance to share and connect; to be heard as I say ‘This is what I see—do you see the same thing? Does it mean anything to you? Do you see beauty here?’* This feel like a great gift. I’m so grateful.

The processes of writing this column over the last three years, and of writing and submitting poetry over the last two, really have been a process of my own voice emerging. It might sound pretentious but actually I mean this very simply: it’s been about learning to hear myself. Discovering what I really, truly feel and sound like. Starting to recognise and honour myself not because I’m particularly insightful or special (though I am, of course, dahlings) but simply because I’m me. This is the only song I will ever be able to sing, and I’m the only person who will ever be able to sing it. This is true of all of us, and that includes me. Really connecting with all that can never be undone, even if I never sell another copy of shades of blue. And hungers, the next collection, is coming along fast. Once you start speaking, it seems to be hard to stop…

‘Help comes when you need it most’ James claimed in their 1997 song ‘Waltzing along‘. Sometimes I think of that song with the hollowest of hollow laughs; sometimes it feels magically true. It felt so when at Meeting the other week dear Meg asked me about the book’s due date (the expression feels apt) and went on to insist that we have some kind of gathering to mark its emergence into the world. She phoned one or two key people and a few evenings later 6 of us met on the green just outside my house: park bench, camping chairs, couple of bottles of prosecco, some Party Poppers and bubble blowers. An hour’s chat and laughter, and some selling of books: not exactly cocktails and canapes but important and lovely nonetheless. Celia pointed out, ‘You’ll be in the British Library now’ and that thought pierced me. I really will! How amazing is that? And then as I was putting my signature onto the flyleaf of about the fourth or fifth copy, something darted across my mind and heart: I’m signing my book. I’m signing my book! How wonder-ful! The sensation was fleeting but real. My friends enabled me to stop scurrying and just be here now, to hear the tree fall. As so often, I’m so very grateful.

Which is, of course, what I bang on about so much in these pages. How on earth would we manage without each other? All of us: we’re what makes things possible. 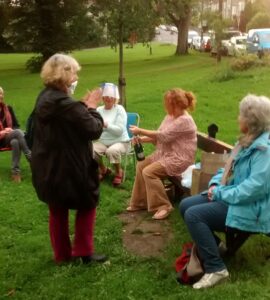 * The book is available from the usual retailers (I’m listed on Amazon for goodness’ sake!!). However, the only way I make a bean is if you buy it directly from me. If you’d like a copy, please do visit my poetry site. I’d be delighted!

**This post’s title comes from one of the poems in shades of blue. To read something from the book, click here. To read another poem from the book, and some published in other places, visit lucycrispin.com.

1 Comment on thing 49 and a quarter: ‘for the poet, what behaviour is meet?’: shades of blue