Marooned on a far-away planet, Douglas Adams’ Hitchhiker, Arthur Dent, wakes up and gives ‘his early morning yell of horror’. 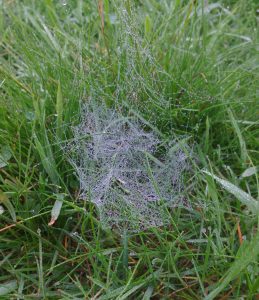 A Martin Amis narrator talks of ‘the difference between cosmic reality and how you sometimes feel when you wake up in the morning’. Doctors (and obsessively-Googled medical sites) refer, more blandly, to ‘diurnal mood variation’. But whatever you call it, how you feel in the morning is not always good.

Or at least, how I feel in the morning. I shouldn’t make assumptions, though I suspect I’m not alone in frequently finding myself struggling, on waking. There’s a greyscale from just not happy through mildly sad/uneasy all the way to existential terror, adrenalin-fuelled anxiety, profound melancholy and despair, and it’s been that way as long as I can remember. But these last few months I have been experimenting with a morning walk; and so transformative is it that I want to celebrate it. It is officially Thing 2 of the splendid things I’m doing.

I’m lucky enough to live 5 minutes’ walk from a great café and 5 minutes’ also from a broadleaf wood, a golf-course (manicured to a depressing degree) and the (blessedly-wilder) Kendal fell. 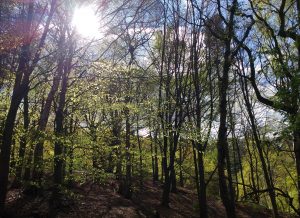 If I can once break the inertia, I can be out in greenness in minutes. But oh, breaking the inertia can be hard. It’s a lot easier if there’s sunshine going on outside, or the light grey cloud which Bill Bryson likens to ‘living under Tupperware’—or even simply if it’s dry. But often it isn’t, and I lie in bed listening to the noise of the rain, and really, really don’t want to move. My neighbours’ badly-maintained guttering adds a cataract sound-effect which makes the rain seem apocalyptic when it’s merely utterly drenching. Nonetheless these days I make myself get up and—eschewing even basic grooming—rustle my way into my raincoat, get the Scarpas on, and go.

And even in the first ten steps away from the front door, I’m already feeling better. Partly, I suppose, that’s about approving of myself for committing, for having a creative response to a painful mood. But no matter: it’s amazing to feel so different so quickly, and I am grateful for the almost-instant relief.

The first bit of the walk is uphill. From the bench at the top you can, on a good day, see the Howgills, the Langdales, the Kentmere horseshoe and, glinting distantly, Morecambe Bay. It’s a 360-degree panorama of free splendour. But whichever of the routes I take up, somehow it is always up: there’s no avoiding the puffed-out, semi-alarming, blood-pounding-in-ears state which exercise brings, and which is not, for me anyway, intrinsically enjoyable. I usually pass through grumpiness and resentment (don’t greet me at that stage) and yet, undeniably, there’s something in the immediacy of the physical experience which adds its own alchemy—biochemistry, I guess—to the morning walk. It’s unignorable, absorbing, and insists I attend to the here-and-now.

Also contributing to the alchemy is observing the trees, plants and creatures moving through their year. I’ve already had the delirious rush of spring,* 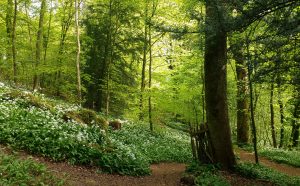 when there were new things to notice every day, and the slower settling-into-fullness of “summer”. The wood, bursting with song in April, is quieter now—can birds, like all of us, put less work into relationships once they are established?—and more deeply, lushly green; the woodpecker’s more difficult to spot. But I may see robins, kestrels, pigeons, wrens, blackbirds, doves, jays, crows, thrushes, jackdaws, and lots of what a twitcher friend tells me are known as Little Brown Jobs. They bounce and bob on the air, letting themselves dip and then lifting themselves with two or three wingbeats, then drifting and dipping, then lifting again… 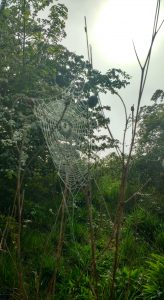 There are rabbits (once, two hares!), sheep making an escape from the adjacent field (hurrah! they annoyed the golfers!). There’s the black smear and glisten of slugs, the tracery of spiders’ webs, the moving, changing festival of wild grasses. There are smells, too—of rained-on earth, cut grass, hawthorn blossom, roses (yes, I do stop and smell them). There are people: Lion-Dog Woman, Two-Black-Dogs Man, Westie Man, ‘Isn’t this Good-for-the-Soul?’ Woman: a micro-community who share nods and smiles and brief comments about the weather. 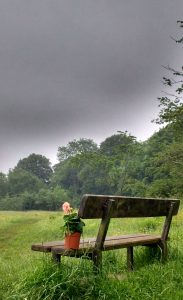 Some days the cloud is low enough to sit in the treetops; on others the sun brings the dew smoking up like a benediction from the brilliant, drenched grass. And occasionally there are sights intriguing and wonderful, like this one—a strangely moving reminder of how this shared earth is full of our numberless, untold and precious stories.

No matter how I was feeling before, by the homeward stretch I am feeling different. I might be full of ideas and excitement; perhaps I’ve found a nagging loneliness, or irritation, or sorrow, and am doing the work of feeling it; perhaps I’m just looking forward to breakfast. Or I might have stopped in the woods, raised my hands to the sky, and wept tears of gratitude for the pleasure-pain of simply having my insignificant, magnificent and—as middle-age insists on telling me—finite life. 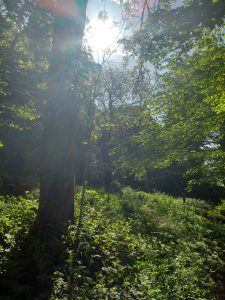 (Usually when that happens I get my hands down again sharpish, lest some poo-scooping dogwalker come round the corner, bringing turds unto epiphany.) But very frequently I have a sense of possessing the morning, possessing the day—like a daily micro-spring, a sense of potential, of the future spread before me. Simon Davies, a friend and fellow-poet, has written of how ‘each morning we are named by sunlight’;** and those beautiful words capture something of this, for me: this feeling part of things, recognised by life: alive. It’s a baseline. It’s where everything else starts.

That might not sound like much; but on the morning walk I remember that, really, it’s enough. 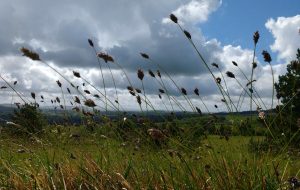 *see ‘more trees, and the ramsons beneath them‘

** see ‘thoughts after the film Slacker’