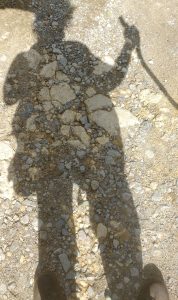 So: we walked the 25ish miles from Frome to Bath, stopping to swim, eat and pour water at various points along the way.

Sounds like a kicking weekend, huh? But this turned out to be one of those experiences where time seems to expand to accommodate all the stuff its brings. I think of this as herniated time—time which bulges sideways and intrudes into eternity, or timelessness, or both (if they’re not the same).* All this to be obtained merely by putting one foot in front of the other.

The morning’s walk on day one took us across fields, past poplar-copses (we stopped to listen to the wind in the leaves) to a tiny church on a tiny island. The approach was strewn with real-flower confetti. 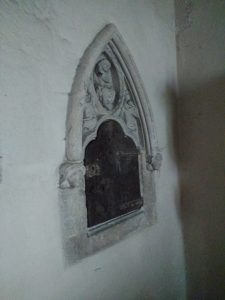 Regular BCP services happen there, by candlelight (no electricity), and there was an original, 13th-century, time-pocked wooden aumbry door. Guy and Will made music, we poured water from the Frome spring into the font, and then we all joined in the newly-learned water song. The singing and pouring, repeated at various churches over the weekend, at one point prompted Guy to confess—utterly disarmingly—that he wasn’t really sure why he/we were doing this, but that he knew it felt important, and meant something. I loved it that he felt able to own his not-sureness, not least because it’s always good being reminded to be kinder to myself about mine. In Twelve Steps to a Compassionate Life Karen Armstrong regrets our current lack of Socratic exchange, the original intention of which is that ‘everybody should understand the depth of his ignorance’. Sureness and stridency are so often rewarded, and this owning of not-sureness was a touching and lovely thing. 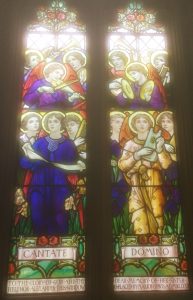 Ritual, defined by the OED as ‘a religious or solemn ceremony consisting of a series of actions performed according to a prescribed order’, is what marks and honours that which is important. In the absence of any pre-scribed doctrine and associated ceremony to which you can willingly sub-scribe, or accede, the creation—or even better, co-creation—of ritual is perhaps the next best thing. Lamenting as I currently am the lack of ways to honour being unwedded, being childless, and moving from fertility to post-fertility (I don’t even know if there’s a WORD for that), I really treasured this evolution of new ritual. Singing together is strong magic, as everyone who fills up during wedding-hymns knows. In these small, dusty churches something was freed in me by the plangency of our shared song, and I wept the slow, calm tears of acceptance and letting go. Paradoxical moments, these, of separateness and deep connection: moments arising from connectedness, which set me apart in my grief, itself about being “other”; yet they connected me with myself and, from there, with the universality of loss itself. Together separate together… there seems to be a lot about circles in pilgrimage. 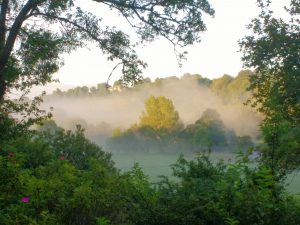 Perhaps pilgrimage is always a public act about a private experience, a point where the separate and the shared intersect. I cannot know who amongst my fellow-pilgrims was touched, and how, and by which aspects of the weekend’s experience. I was struck, however, by how many of us were at some kind of transition point, and that this was bringing together some apparently-disparate types. I walked with people who had nannies for their children, or squealed and grumbled about sleeping on a therma-rest; people who said ‘Yah, deffo’, or who practised Shamanic Medicine and drank Amazonian halluci-juices. There were those who worked with the bereaved, the dementia-struck, the dispossessed; those with spanking-new kit and borrowed boots, and those with practised towel-tying-to-pack procedures and far-travelled feet in worn leather sandals. It was fascinating, various, and both stimulating and tiring at the same time. No wonder time had to herniate to fit all this in. 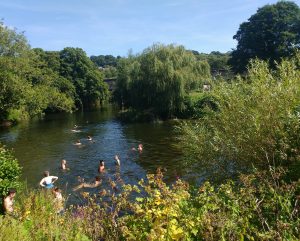 This post seems to be herniating, too: we’ve only just got past lunchtime on day one, and I haven’t yet mentioned fording a river (documentary evidence missing cos my cameraman accidentally took 7 shots of the bridge parapet instead); the coldest wild swim I’ve had in a long time, made possible only by peer-presence and the sense of how I’d regret it if I didn’t, and followed by deep, whole-body shivering then an equally profound warm glow; and a (slightly) less cold, if silty and weedy, swim at the confluence of the Avon and the Frome. There was shared Nepalese curry in the courtyard of Iford Manor (‘… Yes, if you see something in the grounds which looks Roman, it probably is,’) 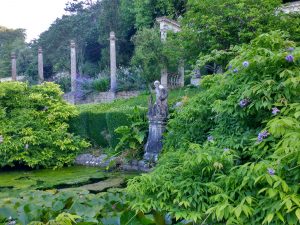 which involved the—for me—breakthrough discovery that kale can in fact taste nice (if it’s deep-fried as pakora, and you’ve walked 12 miles first). There was choosing to sleep on the cloisters’ terrace because it was August 12th 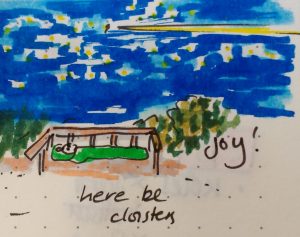 and there might be shooting stars (AND THERE WERE!!!!! No light pollution! Happy birthday to me!). There was breakfast back in the courtyard, where I greeted the (lovely) host rather too breezily and was asked to be quieter because ‘Jane is asleep in the house, and Mrs Walmsley is asleep also’! (Who is Mrs Walmsley?? the former nursery nurse? The Dowager Duchess? The madwoman in the lodge?) There was sunshine, and the strange surprising joy of seeing water springing from the ground in ferny woods and shaded copses. Above all, there was simply the walking, 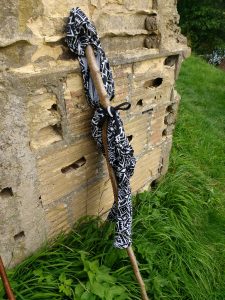 and the pleasing reduction of all decisions to what to eat next, which bits of mud I might skirt round, and how to best to dry my tankini. Time was indeed away and somewhere else—and oh, the bliss of feeling freed from it.

Another paradox about pilgrimage is that it requires a destination to exist, but is not really about being at the destination. Certainly I was aware that walking into Bath at the end of the weekend felt very different from arriving by car; and yet it didn’t really matter that we were there, only that we’d got there. Things all became a bit rushed at that point, which slightly marred the closing hours for me; but after a top-speed ritual round the Cathedral’s font some of us went on to a very swish spa nearby, where the naturally-hot waters are somehow conveyed to a pool on the roof. The sensation of getting into water so warm, and so mineral-dense I could feel it supporting me, after walking 25 miles and getting in and out of some very cold water, was indescribably delicious. And that’s where you can leave me, bobbing, tired and content, watching the sun set over Bath while a fellow-pilgrim sings to me. Silenced, upon a rooftop in Somerset. 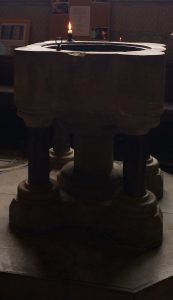 *For more about weird stuff going on with time, see ‘To His Coy Mistress’