Like many things, not all choir-practices are created equal. 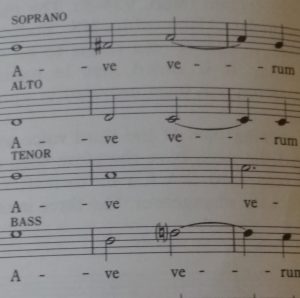 Some are frustrating and tiresome; some irritate and enervate; others simply feel as if they’ll never come to an end. You’re singing a piece which isn’t to your taste and, as you listen to another part (it’s always another part, of course, never the sopranos) sing their line over and over and STILL make the same mistake, you look at your watch and realise there are still 57 long minutes left to go till tea time (and the word has gone round that it’s not even chocolate squares tonight, only oat crunches). The church heating’s set either at “inadequate” or “inferno”, your seat’s uncomfortable, and the person in front of you even has irritating hair, never mind the noise they’re making or the between-songs commentary they mutter semi-continuously and not-quite-sotto-voce enough…

Then there are things about your own voice which can stymie you. Because singing is one of those things which uses all of you—your physical and emotional self, your spirit, your whole being—you can’t really get away with anything if you’re having an off day. When it’s good it’s very very good, and when it’s bad it’s horrid. A pro will have time-honed technique with which to shore up a wobbling self; for an amateur, there’s less likelihood of hiding the dodgy bits. Sometimes you can’t remember how to breathe, and gasp inelegantly (and conspicuously) in all the wrong places. You can be too tense and tight to make a nice sound (= high stuff sounds like the mice from Bagpuss) or too worn-out to sustain it (= woolly, breathy, raspy, flat, or simply not there) or too unconfident (= quavery, sharp, shame-inducing). So many ways for something apparently-simple to feel unsatisfactory.

Ok. Some of this I can’t help, and some of it is probably me. All right, is me. I’ll shift from second- to first-person in acknowledgement. Choir practice often takes place on a weekday evening and I’m likely to be tired and/or grumpy; I may have travelled a long way, after a busy day’s work. And everyone else in the room is also a human being, bringing in her/his own day in with them, just as I am. On any given rainy Thursday night, there are a lot of different moods in there, never mind the range of tastes, personalities and ways-of-being-in-a-group. Even on a good day, no-one’s ever going to like everyone, really, nor everything we do. And all of this feeds into and shapes the experience as a whole.

But. But. However comprehensible these reasons for singing together occasionally not working, a duff rehearsal can feel disproportionately disappointing or annoying precisely because it can be—and usually is—such a life-enhancing, life-affirming experience, whose satisfactions range in intensity from the comforting/relaxing/warming to the simply sublime.

In some choirs I’ve known my fellows for twenty years. We’ve witnessed each other go greyer, put on weight, change jobs, have children, gain and lose partners… there’s a connection with each others’ lives which—though not necessarily close in all cases—matters, simply because it’s been there a long time. We’re comfy as slippers: a kind of family, albeit one you leave behind at 9.30pm (which sometimes seems the ideal family). We know which soprano will grumble about singing mixed-up rather than standing in discrete parts; which basses are going to need a fire-blanket thrown over them because of the enthusiasm with which they approach the pp entry in bar 22; which tenor will always need encouraging actually to watch the conductor; and which alto can be counted on to power in with the right note no matter what chaos may have gone on in preceding bars. It’s a reliable and precious experience of the familiarity and affection which constitute such an important part of longstanding relationships. 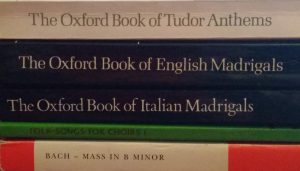 And we’re all there because we have something in common. We like singing: we make music together: we are in harmony, if only for a while—are translated into a composite being, a unit which is so much greater than the sum of its parts. On a recent Radio 4 programme one contributor talked about the significance of breathing the same air, at the same time, as each other—’sharing breath’—and I was really struck by how this emphasised the symbolic dimension of singing together. As the programme argued, this is true of singing on the terraces, at a funeral, at a protest camp or march… It’s about being human, together.*

Being part of a mass choir’s huge sound has thrills and satisfactions very different from those of a small chamber choir, an a-capella quartet or duo, or even a casual one-to-a-part group like one I sing in monthly. We sit round each other’s dining-room tables, sharing wine, crisps and a love of Renaissance polyphony. There’s usually a lot of giggling and teasing, and there’s no stress, because we never perform. (The performance of music together, rather than just singing together, is a whole different matter, and will no doubt be a Thing at some point or other.) But what all these different kinds of singing together do have in common, for me anyway, is something which can occur in any one of them—something which, like all experiences of the spirit, is hard to describe. Roderick Williams captures a lot of it when he says ’it’s like screaming or crying, living right at the edge of your emotional experience, but [it’s] shared, and organised’. It’s to do with being so connected with self that you are freed from it—being so far into the particular that you find the universal again. It’s about making beauty together, the chaos of experience being evoked, represented, shared and resolved, or at least rendered as something you would choose to bear. It’s a profound coming-home, to yourself and to the world. Beyond price, these moments of grace are sacred experiences where now is all that exists, and life is experienced fully as the dazzlingly, heart-breakingly beautiful gift that it is.** 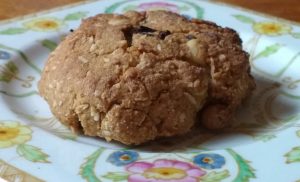 *To hear wiser, more knowledgeable heads than mine talking about (among other things) the political dimensions of singing together, and how it relates to individual, local or national identity, listen to the programme here.

1 Comment on thing 5: ‘delightful to nature, and good to preserve the health of man’: singing together