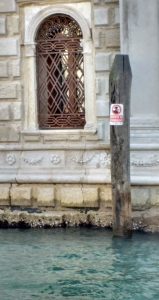 The odd pizza? Yes. Some piazze? Certainly. But… a penis (plus veg. accompaniment), deliberately worn outside the trouser, at a vaporetto stop at 3 in the afternoon? Nobody mentioned that in the guidebooks. No wonder they called the film Don’t Look Now.

Definitely not one of the images I wanted to bring home from Venice. Fortunately I brought home some better ones, too…

… My sister, who hadn’t been that keen on going, stepping from the airport waterbus at our nearest stop, San Stae, and saying very quietly, Wow, as she pulled out her camera to take a picture. She never takes pictures. My Mum, who had always wanted to go, standing on the Rialto bridge for the first time, looking down the Grand Canal. A mixed experience, I’m sure, as she hadn’t been able to share the experience with Dad, as she would have wished. Nonetheless, she was here at last: a lifetime’s dream, fulfilled. (And an imminent need systematically to re-read all the Donna Leon books.) 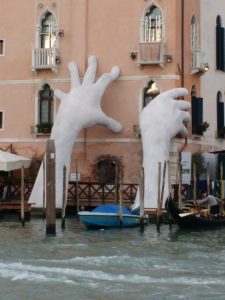 … The Rialto market (veg. I chose to see, this time!). Such an intense sensory experience: huge bouquets and sculptures made of massed and glossy tiny chillis, mostly red, but some yellow and orange too. Beautiful bi-coloured pods beanpods in pink and green; baskets of vivid green salad leaves, each leaf individual and perky with freshness; heads of all sorts of lettuce, including one about the size of a hand, with long, twisted heads of deep purple leaves and cream semi-translucent central stems. Shining piles of tomatoes, red, yellow, and ridged red-and-cream ones which looked like mini squashes; dark, gleaming aubergines; tubs of floating turned artichoke bottoms. Fruits of every kind. And the fish stalls, too: glossy, sea-fresh fish, silver, white, grey and black; the spear-snouted head of a marlin (or something), standing upright in the middle of a stall; nets of spiky grey shellfish, conch-curved, tiny; mussels and clams; and a large plastic crate of small brown desperate crabs, moving and struggling over each other but trapped there till they were shovelled into plastic bags to be taken away and boiled alive. All this under arched colonnades on worn stone flags which, though hosed down nightly, still hold the centuries’ deep tang of the sea. 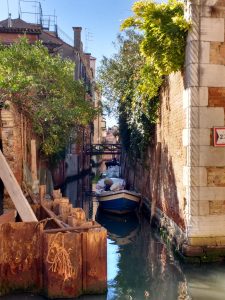 … A lot of wandering around Cannareggio and Santa Croce, Murano, San Marco: a maze of narrow calli, myriad small up-and-down again bridges, the occasional opening-out into a campo, and so many hidden pockets of beauty surprising us into a breath-held, shared, appreciative silence. But also a sense of responsibility, because I’d been elected wayfinder and—as I remembered within about 2 minutes of stepping off the vaporetto—Venice is a place not for maps but for following your nose.

That’s lovely if you’re only responsible for yourself, but different when you feel responsible to others who tire sooner but won’t “make a fuss” (Heaven forfend!). At times I got grumpy and frustrated; but then I also got the joy of seeing Mum laugh a proper, head-thrown-back, full-on laugh; got to giggle with Susie as we tried to be casual about standing up on the gondola ferry (the VeniceCool equivalent of not holding on, and not looking at anyone, on the Tube). The one comes along with the other. That’s the deal. 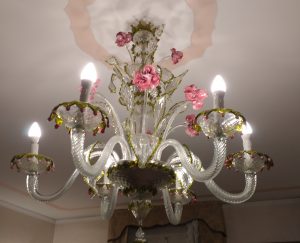 … Our extraordinary Air B and B apartment, just off the main per Rialto-San Marco/ Piazza Roma-Ferrovia route. Tucked into the first floor of a building on a tiny, unassuming calle, it was grand inside: marble-floored, its windows shuttered and multi-swagged, draped, hung with gorgeous lace; rich with Murano glass so lavish you could forget its ugliness (even a chandelier in the bathroom); decked with huge paintings framed in heavy gilt; beds furnished in heavy brocade; ormolu age-speckled mirrors above delicate-legged tables … It was like being allowed to stay in a National Trust property, and about as warm, too, until a (reluctant) landlady stopped by to fettle the heating. And alongside the grandeur, only two working sockets, and a note requesting ‘Please, don’t use all appliances same time, there would be black out. Ciao’. 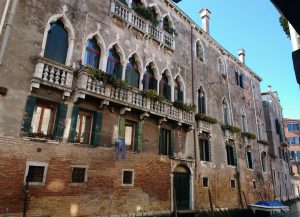 The co-existence of the ravishing and the rotten: seems apt for Venice as a whole, really—so worn in places, and yet so beautiful. I had a sense of a place at once fiercely determined and defiant—structures built on water, for goodness’ sake, seaweed-hemmed, muscles of water slapping and lapping at the foot of walls; built as if to wrest permanence from evanescence, solid from liquid—and yet also (seemingly) acquiescent to decay, to a crumbling and slipping-away from its prime: so many buildings where stucco isn’t replaced when it peels from brick, because the water would only get in and draw it off again; so much soot and dirt on facades, so many rust-stains, so much unvarnished, paint-peeled, blistered woodwork. How much of the Venice’s apparent acquiescence is down to lack of money, or Baroque bureaucracy, I don’t know—but she seems so far from the world of the grimly-taut, plastic-surgeried celeb. She’s not Barbara Cartland, but Audrey Hepburn—beautiful all the way down in her bones, and dignified in her ageing. Or perhaps I was just seeing something I need to see at the moment, about letting-go being acceptable.* Perhaps I’d been dazzled into confusion by all that fractured light on dimpling, green-blue water. 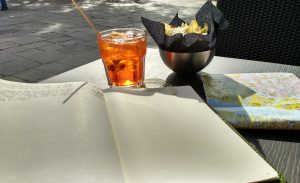 At one point Susie and Mum went to the Accademia and I went for (another) Aperol spritz in the Campo Santa Margherita, with my journal for company. A few trees, still full-leaved, in the centre of the wide campo; a quiet buzz of many languages, young voices; a feeling of unhurried purposefulness in those around me. Managing to savour my drink, for a change, I rejoiced all over again in the ubiquity of ornament.

Corner of a house? Let’s whack a stone figure on it. Bare bit of wall under a window? Make with the frieze of faces. Ridiculously, gratuitously lovely. What a gift to be here—surrounded by beauty, alert but relaxed, warmed and content in the late-October sun. 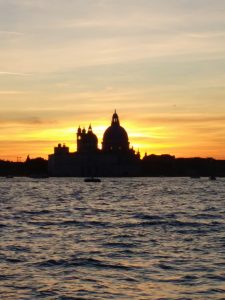 *For more on the sorrow of letting-go, and the fear of dying, see ‘Spring and Fall’, Hopkins.

2 Comments on thing 8: ‘the glazed and brittle palaces’: a few days in Venice