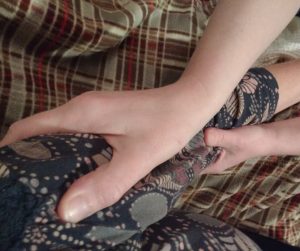 Thus runs the unusual—and, to me, quite brilliant—strapline on a poster for a friend’s shiatsu practice.* For those of us with what Clive James has called ‘the right set of personal inadequacies’ (or rather, who feel we have them), the thought of physio, massage, or any other kind of body treatment is often tainted by the prospect of Having To Reveal Our Body To Someone Else. Reactions to that can can range from mild discomfort to anxiety to utterly paralysing I-can-only-get-undressed-in-the-dark terror. So to make it clear that something lovely can happen without something dreadful also having to happen is, I think, genius.

Thing 7, then, is shiatsu. My ignorance of Traditional Chinese Medicine means I can only talk about my experience of it, and I apologise to any TCM practitioners who read this and feel misrepresented, annoyed or in any way upset. Please comment and correct! But perhaps that ignorance points towards the first marvellous thing about having a shiatsu treatment: I don’t need to know what is happening. It’s one of those rare and precious times when I can legitimately hand myself over to someone else. I don’t need to be responsible, come up with the plan, know the answer, be on the case… and oh, that is so good.

My rudimentary grasp of it is that TCM understands there to be a vital energy, Qi, which moves through the body along meridians. Injuries, physical and emotional, can lead to blockages or other unevennesses in that energy; there can be Imbalances of this or that, too much damp, not enough something or other. Shiatsu helps unblock/restore/get Qi going, by means of firm-but-gentle manipulation, pressing, massage, sequences of movements, all of which take place while you are clothed and, often, through comforting cotton blankets and/or freshly-laundered muslin cloths. That’s about all I can say from the client side of the blankie. And hurrah that I need know no more! 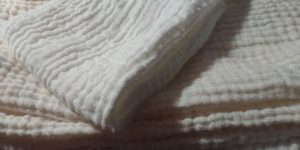 Every once in a while, then, I go to see Clare, who awaits in a small, warm room. There’s a futon mattress laid out on the floor; pillows at a range of heights; a bolster to go under my knees when I’m lying on my back; muslins; and the abovementioned blankie, along with some backup blankies too. I talk a bit about what’s going on for me, then lie down, get covered up and comfortable. I hand myself over, and am ministered unto; and it is marvellous.

Different things are done each time, depending, I guess, on what’s going on in me. Sometimes Clare picks up my legs and—so it seems—describes complex and improbable geometrical shapes in the air, like a sort of body Spirograph. Once I’ve got over Fear Of Farting, it’s lovely, and leaves my legs feeling sleeker, longer, more free. Sometimes she does this amazing move which I call the Blister Pack.

You know that satisfying feeling when you push a tablet through the metallic backing on a blister pack, and it pops through and out? Well, imagine if the tablet was you, and the pack also was you, and someone had the weight of your arm and rotated and did who-knows-what-else to it, and to your shoulder/upper back, and all this led to you being somehow pushed and popped through the knots of yourself and delivered out into freedom and release? That’s what it’s like!

Sometimes there’s rubbings and pressings up and down “lines” (meridians, I guess) on my back/legs/head, which Clare seems to see by means of some magic x-ray vision. I’ll feel a weird part-pleasure-part-pain physical shift and movement of something inside me which, if it could be seen, would look like a creature freeing itself and shooting around under the skin (all a bit sci-fi). It’s often very upsetting, but in a useful way: there’s a sense of profound reconnection with myself, and a reminder of how the emotional cannot be separated from the physical. 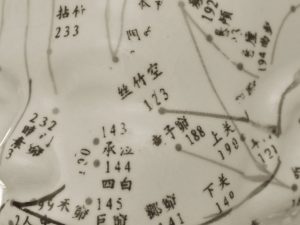 I’m reminded, too, that my body is a whole, not just a collection of bits: she touches my hand and suddenly I feel my ankle, or presses my forehead and I’m aware of my left shoulder blade. It’s an odd but lovely experience which, if I drew it, would look like lines appearing in the night sky, connecting the stars and rendering the constellations visible. Sometimes all it needs is gentle hands being laid on my upper back, and I’m in tears immediately—tears which are received without fear or judgement, and which, therefore, flow until they are finished and done. It is strangely exhausting, but (after an hour or so) energising too. And it is deeply, deeply relaxing.

But it’s not necessarily solemn. During a recent treatment I was telling her about my baked-potato-sized fibroid Eddie (the King Edward) which, I’d just been told, might perhaps be extracted during a keyhole procedure if it were first chopped into bits inside me. I’d boggled to learn, during the gynae consult, that the tool which would be used to chop it was called The Morsellator. I mean, what? Surely that’s a superhero, named by some young, gung-ho and seriously unempathic med student? At this point we both simultaneously realised that if The Morsellator was used on Eddie, I would end up full of chips, and we laughed so much that Clare, after a moment of trying to hold it together, simply lifted her hands from my head with the dignified words ‘I believe your treatment is over for today!’. And it was. Her work was done.

It will be obvious from the above that relationship is important in shiatsu as in any therapeutic treatment: the safer and more relaxed you feel, the more you’re going to get out of it. But even before this, the primary requirement is the (apparently) simple ability to receive—and the knowledge that it’s ok to do so.** And so few of us know this. I can’t count the number of clients I’ve sat with who feel it’s “selfish” to take time for themselves; who spend their times looking after others and never get looked after; who only believe that they’re good people if they’re giving out, and that it’s bad to ask, to need, to take… Every day at work I witness the loneliness, misery, resentment, burnout, sorrow, incapacity, dis-ease that can arise from years—lifetimes—of not knowing it’s ok to need, and get, nourishment. I feel, variously, angry, sad and hopeless that so many of us are on our own with wants we dare not express or have so deeply pushed down that we don’t even know they’re there. I spent a lot of years with those myself, and still regularly need to remember that, to give in a healthy way, I need to be replenished—or replenished-enough—myself. Giving from a place of deficit is unlikely to end well.

A year or so ago, someone wrote in Therapy Today that one of the key requirements for a counsellor to work healthily is to ‘turn up loved’. For me shiatsu is one of the ways I do this. It’s a primal, physical sense of being taken care of which is beyond price. I feel deeply glad to have found this treatment; feel pretty chuffed, too, that she doesn’t need to see my pants. 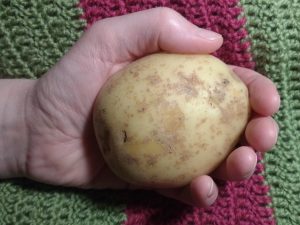 *If you want to, you can find more information about Clare’s practice here. This is not a sponsored link!

**see ‘Love (III)‘ for more on the struggle to receive.