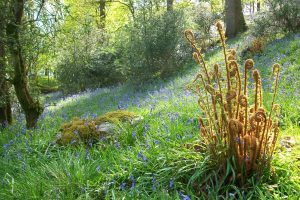 Like Bach, wild swimming and my sister’s home-made blue cheese and mushroom pizza, spring soon exhausts my superlatives, so I’ll simply go with Hopkins and say that ‘Nothing is so beautiful as spring’. On a day like this, who could possibly disagree?

I discovered this tiny nature reserve only last year—a friend recommended it—and by the time I got there the bluebells were already on the wane. Ever since, I’d been looking forward to this spring and to seeing it in the first full freshness of its beauty. I’d chosen a day, and found a friend to come with me; and somebody somewhere must have sacrificed a hecatomb or two to the Bank Holiday Gods because it was that rarest of things—a sunny, warm, May bank holiday weekend. 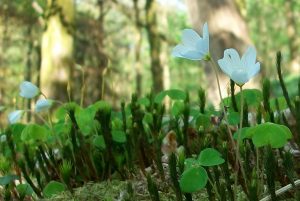 Barkbooth Lot lies up one of those single track, ice-pitted, palimpsest roads: the kind where your foot hovers over the brake and you begin to wish you’d worn your sports bra. Access was further complicated by this being an Open Gardens day—ergo a lot of earnest people hanging around at the roadside to do ushering duties, and large vehicles crammed into all the nooks where it’s usually possible to leave the car. Eventually—and, with Suan’s help, avoiding that ominous thud of Something underneath the car rupturing on a hidden boulder—I managed to pull over far enough to park. We walked back up towards the reserve entrance, passing an unusually large stand of blackthorn, which was a dazzling white mass of fuzzy-looking flowers poised along intricate black branches; such a welcome plant, not just in its provision of sloes for gin but also in its willingness to blossom early, straight from the bare wood. For me it’s always a looked-for herald of spring.

Not that spring needed much heralding today. After what people were saying was a long winter—I’m cruising on hormones so am pretty much untouchable by cold—spring was unquestionably here. Thus once we’d walked up the first unpromising bit of track into the Lot we had a choice between lovely alternatives: the delicious cool of the fresh-leafed, wooded, shady bit, or the heat, flowers and blossoms of the more open, sunny bit. We decided to go for sun first. 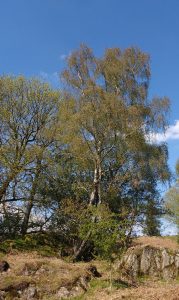 And it was utterly glorious. It was a clear day—no heat haze—so the grass, young leaves and flowers had a technicolour vividness familiar from holidays abroad. I saw cowslips, lady’s smock, forget-me-nots, early orchids, violets, primroses, celandines, small pink and purple thingies and many others I can’t name. Expanses of last year’s bracken, now died back and dry, were pierced here and there with unfurling spears of new growth, chartreuse-brilliant against the bronze. Ants’ nests were lumpy and tufted; wild cherry blossom, borne on a warm, almost-imperceptible breeze, drifted onto the intensely-green grass.* New leaves shimmered on the silver birches. On the other side of the moss-mellowed dry-stone wall was another field where lambs lay, heat-zapped, and self-important jackdaws paced like thoughtful barristers, wings folded behind their backs. There were sounds, too: the loud and wonderful absence of traffic noise; the ticking of last year’s growth drying; the low drone of insects and the louder, fuzzier bumbling of bees; the sound of our feet swishing on grass or padding softly on the dry-dusty paths; and birdsong, of course, which made air itself into a medium of pleasure. Calls-and-answers, warnings, indignant squawks from pheasants, the constant ecstatic air-scribble of the larks… It seemed, to my anthropomorphic ears at least, like nature expressing its own delight in itself. This was how my heart would sing if it could: a joyful hymn of expansiveness, promise, and the endlessness of beauty. 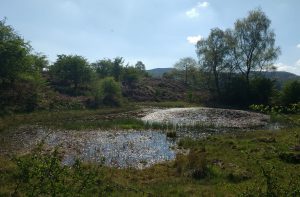 Just when we thought it couldn’t get any better, we rounded another bend in the path and came upon a pond, where the many lilies were just poking what Mary Oliver calls their ‘wrapped beaks’ up above the surface. As we approached we could see an odd phenomenon: multiple circles of ripples moving swiftly upon the surface, crossing and re-crossing each other, zipping hither and yon—and all with no immediately-obvious cause, so that it looked like the most elegant and enchanting of special effects. When we got closer, it was possible to see a coruscating silver light at the leading edge of each ripple-circle: an air-bubble, it turns out, belonging to the whirligig beetle—a modest critter to make such a beautiful effect. The pond was quite weedy, but in the clearer stretches the odd lone taddy, still at the dot-and-a-wiggle stage, was bravely crossing the unimaginable distances of open water, trailing its shadow across the silty pond floor. Sighing, pleasure-drunk, we looked at each other and beamed. ‘We’re alive, and we get to have all this’, I said. ‘Yes,’ she said, ‘yes’. 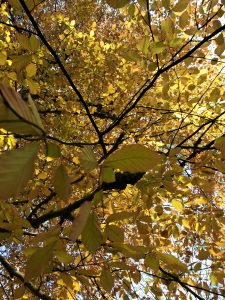 A few more minutes’ walking took us to the edge of the wood, which we entered through a splendidly chunky wooden gate. The wood itself is a satisfactory mix of broadleaf (mostly oak and beech) with, here and there, the odd bit of holly. The path round it is pleasingly but never too strenuously uppy-downy, and today was dry underfoot, even near the stream which wanders in at one edge of the wood, stays for a while, then wanders off again. It’s an undemanding amble—you’re towards the outer edges at times, but sufficiently within the wood to be shaded, and to feel immersed in the young, fresh greenness. Hollies were glossy and deep, chestnuts were raising their umbrellas of leaves, and the beeches, though past their first limp, drooping newness, still had an infant softness which was delicious to the touch; the copper ones being divinely dip-dyed between copper, orange, gold and green. 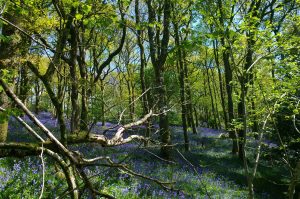 And everywhere, of course, there were the bluebells, lapping in their first perfection in folds and waves around, between and beyond the trees. In another wood I visit in spring, the wood’s floor is divided between bluebells and ramsons, so that as you move through it the air is striped with alternating fragrances of garlic and sweetness. Here, though, the air was rich with nectar: the bluebells were having it all their way, and we were lucky enough to be here for it. Such sight and scent, such dappling of sunshine and shade, such a soundtrack of ecstatic birdsong…. So wonderful to experience, together, this almost unbearable beauty— like a glimpse of heaven, felt and then gone. It put me in mind of CS Lewis’ definition of joy: ‘an unsatisfied desire which is itself more desirable than any other satisfaction’. The beauty is inseparable from the transience, and the joy itself is transient. That’s the deal. It can’t be ‘bound to us’.

Of course it’s true that each season brings its own gifts. My morning walks show me weekly, daily treasures of beauty which are here and gone, only to be replaced by the next thing; and there is a quiet but deep happiness to be found in learning the rhythms of what is here, what passes, what comes next. But such intense peaks of joy as this idyllic afternoon are, for me, an experience of blessedness. They evoke in me an openness to the glory of the world so utter, so acute and profound, that it aches. But—as with any other kind of being in love—it’s the sort of ache I ache to have. 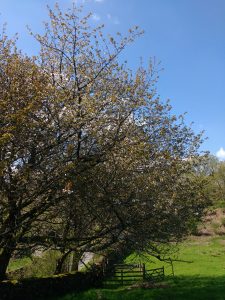 *For more on cherry blossom and the wonder of spring, have a look here.

2 Comments on thing 18: ‘kissing the joy as it flies’: a bluebell wood