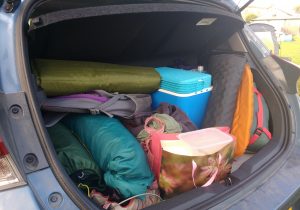 This was Jana’s response when I asked how much the big cool-box held. But before you get on the blower to the RSPCA, let me add that part of her work supports a research programme about otters, which involves the collection and study of otter-corpses. Makes sense, of course, to cool them: minimise whiff, preserve the maximum amount of information… Still. I was kinda glad we were using a different cool-box for our trip. (Plus: imagine writing that product-review on Amazon!)

Jana’s relish of camping was part of what convinced me to give it another go. Before this sortie, my formative—or should I say deformative—experiences had been on Skye and Raasay, and involved just-sub-apocalyptic levels of rain, with strong winds and mandatory midgies, too. One morning in Glen Sligachan I strode confidently off the path into a bog and, as I sank, panicked and turned turtle, so that my whole (huge) pack was sucked into the quagmire with me wiggling and flailing atop it. I remember standing in the loos at some kind of hostel at Coruisk, holding the leg of my sodden, muddy trousers clamped over the outlet of the hand-drier—I wasn’t wearing them at the time—and noting with a weary academic interest how when they inflated and billowed they looked very much like a windsock. Later I woke in the night to find my companion—who’d gallantly offered me his sleeping bag while my soaked one was drying—putting on absolutely every item of clothing he had with him. ‘Is it time to go?’, I asked, sleepily. ‘Bit cold,’ he replied through clenched, chattering teeth. 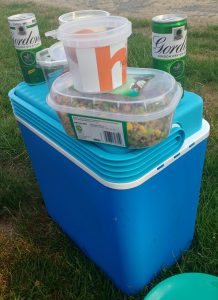 Aside from such nadirs, though, my predominating sense was of the unpleasantness and difficulty of it all being so wet and muddy: how trying it was to have to do everything inside the porch tent so that you didn’t get your bare feet on the sodden, mud-slicked ground, or your muddy boots on your “clean” clothes or inside your sleeping bag—the endless, cramped, slithery, wet, clammy rustle of everything. But given the recent hot, dry weather, I felt sure I was in for a different experience this time. Besides, we were car-camping on a site, not wild camping, and we had pillows, and chairs, and a cool-box full of food: not glamping, but not exactly roughing it either. A good ease-back-in to life under canvas (or nylon; but that sounds so much less romantic).

So, late on this warm Friday afternoon, we turned off a track—which was off a track off a minor road off a main-ish road—and into the Birchbank Farm site, which we’d chosen because we’d be only about 3 km away from a swim in Beacon Tarn. Jana got the tents up with dazzling speed and efficiency—with me in a sort of magician’s assistant role, senza spangly unitard— 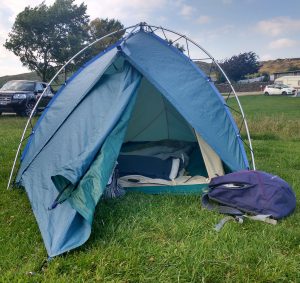 but we decided to leave the swim for the morning and simply relax, eat and bring ourselves properly into this place. For the view from our chairs was lovely: the middle distance had low hills, brown of grass but still green of bracken, and shaded here and there with clumps of evergreens; in the foreground there were other campers to watch with a kind of mild, bovine interest, and swallows to admire as they swooped, chirped and fed overhead. When Jana then produced two gins-and-tonic from the cool-box, I realised quite how lovely it was to inhabit such a charming, portable, personal micro-world. Aaaaah, I said, both aloud and mentally. This is why people get into camping.

Enter, stage right, two cars full of people—plus two mean, unhealthy, unhappy-looking dogs—who, it became clear, were focused on a tinnies-and-Radio-1-and-getting-pished-round-the-fire-till-very-late sort of a night. The main protagonist tried to involve us in the “comedy” of their getting their tents up and, when we declined to play along, became mildly aggressive. His friend wondered if we might be able to help. ‘No, they don’t fucking know anything’, replied Man 1. ‘Besides,’ he added, ’they might be lesbies’. 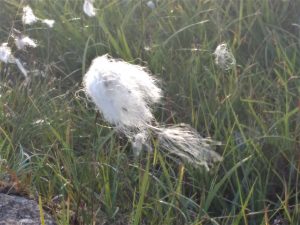 The only thing to do with that was laugh, Jana noting that it was a shame we weren’t sharing a tent (though the fact of our having two tents did seem to have been lost on him). Rather than watch this unfolding aggravation, however, we took ourselves off for a walk on the fell. The sun was low in a hazy sky, and the mid- and higher-level fells looked as dreamy and undefined as an early-80s Athena poster. Amongst the bracken, areas of bog-cotton were interspersed with patches of reed and sedge, and the ground was so dry we could walk in places which would normally be squelchy. Shambling, semi-moulted sheep with rather natty black legs and bellies baa-ed in protest and lumbered out of our way as we went.

Unfortunately, when we got back to the site the party was gathering momentum. I’m sensitive to noise but also intimidated by drunk people so, after we’d retired to our dinky tents for the night, I lay awake for a long time, listening to the noise, and churning with that horrible mixture of anger, fear and impotence. I had to get up for a pee about 11.30, and was going to ignore them, but when I caught yet another comment about ‘there goes that fucking lesbian’, something in me refused to be bullied. I approached the group, asking if they could keep it down a bit; whereupon Man 1 had physically to be restrained from coming at me. Scary. I retreated to my tent and listened to another twenty minutes or so of swearing and threats, including one of ‘pissing on [ma] tent’. I thought of Bill Bryson’s description of lying awake in a tent in the woods, listening to an animal outside which might be a bear. However, I eventually managed to relax enough to sleep.

Getting up around 3 for another shuffle to the loo, though, I felt nothing but delight. There was something enchanting about being out on my own in the night campsite which lay still and silent under the pre-dawn, light-washed sky. There we were, 13-or-so sets of strangers, sharing a field in the middle of nowhere, each in our own adjacent-but-private, self-contained, cunning, flimsy little home. There were no signs of life—all zips were zipped, all flaps down, as though we were a collection of snails who’d retreated into our shells—and at last the absolute peace of the fells was apparent. Bliss.

And the morning was blissful, too. There was something quite wonderful about extruding myself from my sleeping bag, wriggling out through the tent flap and then, voilà, being outdoors. (Minimal grooming is also a nice change, occasionally.) Jana brewed up, and we ate muesli in the sunshine, with the delight of fresh grass underfoot and the prospect of a walk and a swim to come. In fact, we got a bit lost—which was the path, and which the sheep-track?—and there was some blundering around through chest-high bracken, with arms aloft and minds going la-la-la about ticks and Lyme disease. But we found the path at last, and sweated our way to the tarn—small, but very lovely, with a backdrop of hills and a beautiful raft of lilies over towards the northern end.

I was full of thoughts, as I swam, about the difference between this camping and that on Skye; and about Andy, the person I’d been there with, and who I would have followed to far less comfortable places had he wanted me to (I mean, I even took a teaching post in Barking). Alas, he did not want me to; and it hurt a very great deal, for a very long time. I don’t often think about him, but this trip led me to recall those precious times of effortless, laughter-ful, joyful connection. I hadn’t expected to be so reminded of what Eliot calls ‘the door we never opened’ and, without being actively painful, these thoughts were melancholy. They took me to sobering reflections about how ‘way leads on to way’**—how we leave alternatives and unexplored possibilities behind us as we fumble our way through life.

And yet. Here I was, swimming in clear cool water under a blue sky, with a friend alongside me and the prospect of a vindicated-by-exercise large lunch to come. This is what I have: this life, which contains this moment. How fortunate I am that so very much of it is good. 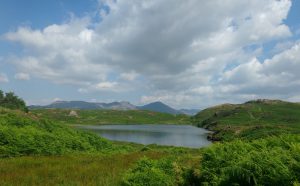 *For more on loving and losing, have a look here.

**For more on the life that never happened, have a look here.

8 Comments on thing 22: ‘… in this blank of things, a harmony’: a night under canvas