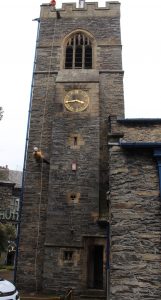 Some of my wilder imaginings had eased a little. The primary fantasy had been connected to a severe, persistent, boarding-school-engendered case of body dysmorphia. In this fantasy, Person 1 of the two-man team running the abseil on the day would take one look at me, pick up his loudhailer—because for the fantasy to be its most nightmarish, he and his colleague would be at some distance from each other, say, a sports’ field length away; which field would, of course, be packed with spectators—pick up his loudhailer and broadcast to Person 2, ‘Mike, we’re going to need The Big Harness for this one’. Now, thanks to the practice with Andy, I could grasp the fact that that wouldn’t happen. Still, the fear remained.

For a few weeks after the climbing wall trip I‘d been puzzled by a strange pain in my fingers, working out, at last, that I’d held on so tightly to the rope that, like Ken, I now came with Real Gripping Hands. In fact, you don’t have to hold yourself on to the rope at all—the carabiner does that for you—but however much I knew that intellectually it was hard to feel it. I’d learned, though, that there would be a safety rope as well as the actual rope I was abseiling on, so that if I froze with fear I wouldn’t forever be left dangling off the church tower, alternately bleating and weeing myself with stress; nor would Person 1 have to cut the rope and let me plunge to my doom. No: if the worst came to the worst I could be safely lowered back down to the ground. Phew. That wouldn’t be great, but it would be better than the alternatives. 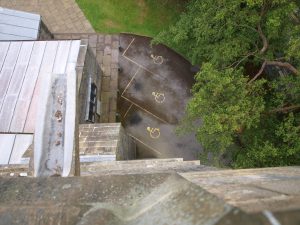 But despite all these reassuring thoughts and experiences, still, I was sleepless quite a lot. Imagining the moment of leaning back raised my heart rate, as did the fact that the church tower was higher than the drops I’d done before. But eventually I worked out that the other thing troubling me deeply was that there would be people watching. Various lovely, kind people, who I know socially, and through work, and choir, and all sorts of places, had—as well as sponsoring me—asked if I’d like them to come and watch. NO! had been my instant, reflex response. Richard was the person I’d asked to come and support me, and apart from him, I didn’t want anyone there.

Once I’d realised all this, terror ballooned in me, at once new and very old: it felt huge and instant and un-rewindable, like an airbag that’s been activated or a lifejacket which can’t be put back into its pack. Deeply locked into my sense of the world (again, thanks to boarding school) was the belief—no, knowledge—that if I attempted something challenging, physical and new, in public, it could only lead to humiliation, mockery and shame. I couldn’t believe I hadn’t put all this together in time to get myself out of this. But I didn’t want to let Izzy down; and besides, I was in blood stepped in so far that, should I wade no more, returning were as tedious as go o’er. Bit disturbing, though, to find my mind so full of quotations from the tragedies…

It was a very long week, but I woke on Sunday with a strange sense of calm. I had messages from Lem in Japan, a friend in Bangladesh, texts from many friends nearer to home. I felt safe and upheld in Meeting, and glad when Richard arrived, and we could set off together. When I arrived in Bowness, Eleanor was reading a book at the kitchen table, and Izzy was playing with the dog: both, in other words, seemed relaxed and everyday, and generally not to be having anything like the same kind of experience as I was. James (their Dad, and Rector of the church) walked into the kitchen. ‘Hello Richard!’ I said to him, brightly. ‘Bit nervous?’ he said. Just a little, James, just a little. 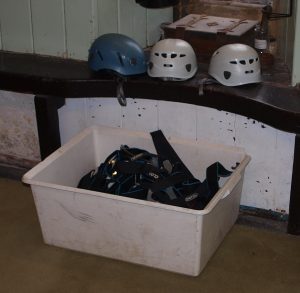 We made our way down to the church where kindly parishioners were laying out a sumptuous afternoon tea, and spectators were beginning to gather. There was what felt like an awfully long time of hanging about, during which one severely empathy-deficient person told me that ‘it wasn’t that high, really’. Privately congratulating myself on not decking them, I endured the feeling of impending trial that you have before an exam. 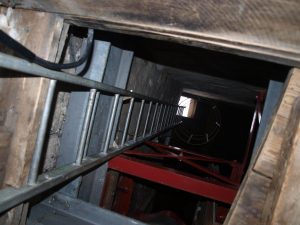 And then, at last, it was time. I went up the narrow spiral stone staircase in the belltower, arriving in the bellringing room where James did a magnificent job of distracting me by chatting about Sayers’ The Nine Taylors, the workings of the clock and so on. (I have no idea what he told me.) Then Johann from RiverDeepMountainHigh arrived to get me geared up. Harnessed and helmeted, I was clipped on to a rope while I made the quite-stressful-in-itself trip up a series of ladders, at the top of which I emerged out onto an extremely narrow strip of roof, between where the sloping bit came down on my right and the crenellated top of the building came up to about waist height on my left. By this stage I was pretty much incapable of thought, or indeed of understanding any instructions. Johann, as Andy had been, was patience itself, repeating himself—now put your hand under that rope. No, under it. Under, not over—and showing quite how much experience he had of dealing with semi-paralysed newbie abseilers. Then he explained that because of the crenellations, and a water spout, and the position of the clock in the tower, it wasn’t quite straightforward—and that because I was going first, we were going to have to work out how to do the actual getting off the top bit. 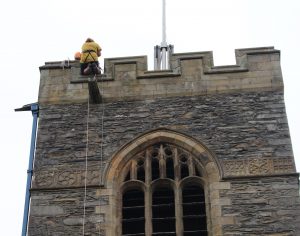 Apparently this was the worst bit to watch, as I first straddled the edge of the wall, then realised I wasn’t going to be able to do it like that, so went back in, then turned round and got up on my knees, backwards, on the edge of the wall.*** This was so painful that it helped me make the next (and most difficult) move, that is, leaning out into space far enough so that I could get my feet onto the wall. And yes, as everyone had said, once that was done, the worst was over; and I felt hugely en-couraged (ah, so that’s what that word means!) by the applause and cheering from spectators below. After that, I just did what Andy had taught me, and before I knew it I was down at the bottom where Richard—who had been primed—was there to hide me in a hug so that I could sob, in relative privacy, the huge and necessary tears I knew would need to come out. 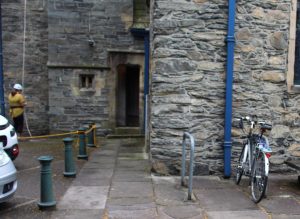 It’s all a bit of a blur after that, but I know I was full of respect for how Eleanor and Iz did, and full of the delicious lemon drizzle cake I’d requested as a reward; full of gratitude and wonder at the warmth I felt from the people there and those who’d already helped me; and full of delight at how much money we made (current total c. £1,500, but do feel free to donate; see below).**** Most of all, though, I was full of relief, the true size and nature of which I only really understood afterwards, when I looked at the pictures.

Because—and this is breaks me every time I think it, let alone write it—when I look at the pictures, what I see—

What I see is not what I dread seeing. I don’t see a fat person on a rope. Instead I see someone brave. Someone who is good-enough. Someone who dared to do something she was terrified of, and who was clapped, cheered and affirmed for it. With help, I challenged over three decades’ worth of a particular kind of self-loathing and an old, limiting set of beliefs about the world. I feel so proud of myself. I’ve no idea how long it’ll take me to come to the end of these precious tears—for the fear and shame I’ve felt for so long, and the joy and wonder of letting all that go. 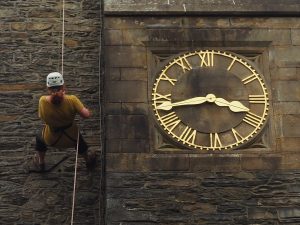 *For more on the wonder of healing, have a look here.

**To read the poem from which this post’s title is taken, have a look here.

***Thanks to James, you can watch the whole thing here.