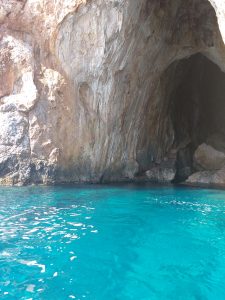 Yes, I know it means dead in Godfather-speak. But it’s what makes snorkelling different from swimming: that you can see you’re swimming with the fishes. So I’m going to call thing 25 that anyway.

Crete, early September. Still around 30 degrees; sea deliciously warm, sky a cloudless forget-me-not blue. We’re towards the end of a two-week stay and unfortunately, because of some health problems (which aren’t mine and must therefore remain private) quite a lot of it has been pretty bad—a debilitating medley of stress, heartbreak, fury, frustration, exhaustion, helplessness… It’s all gone on for years and most of the time I just get my phlegm on, so to speak, and “deal”, but lately I seem to be finding it harder to do so—or perhaps am less willing. Here I am in a lovely place, on holiday and in sore need of relaxation and refreshment. Instead I find myself howling tears of desperation in the middle of tourist-crowded street while people try to sell me lunch, leather goods and windchimes made of shells. More Mike Leigh than Francis Ford Coppola (and it’s probably a good job I don’t have any weapons). Yup, I sound pretty resentful, don’t I? I don’t feel good about that, but it’s how it is.

Far from being knit up, then, the ravell’d sleeve of care is unravelling further. We need something good to happen. I fancy a boat trip where there will be caves and snorkelling but am slightly uncomfortable about it ‘cause no one else is particularly into swimming (or indeed, water in general). But everyone agrees to go. Hurrah! Susie rings Georgios and books it. ‘Be on the harbour at 9.45. Morning is better.’ So here we are—British: obedient and early—standing in the shadeless heat and watching locals bathing while we wait. Mostly, they seem to be simply standing in the morning-calm waters, gazing silently, coming to terms with the day.

In shorts and flipflops, Georgios buzzes up on a bike and climbs onto the boat. It’s small—holds 12—and I don’t really know how to describe it. It seems like some kind of sturdy dinghy—ie inflatable rather than rigid-hulled—but has some pretty serious-looking engines at the back, so is definitely a speedboat; it has a rudimentary awning and some seats which look like they’re off a bus or the back of a motorbike. Georgios slips off his flipflops and pads slowly about the boat, doing mysterious but purposeful-looking Captain-y stuff. He gets us on board—Mum doesn’t hear his warning and, concentrating on not falling into the sea, clonks her head on the metal edge of the awning, which looks painful, and gives her a shock. He distributes lifejackets, tells us what is going to happen, and is generally friendly, charming (but not in a slimy or creepy way), at ease, skilful, quietly knowledgeable. We all fall slightly in love with him.

Susie, Mum and Jill, a family friend who is holidaying with us, are put in seats at the back (less chance of vomming: the bonus for punctuality). The six or seven other passengers are deployed about the boat, while I’m allotted the sort-of pillion seat, right behind Georgios (O captain! my captain). Being short of leg, I don’t fancy sitting astride it, so adopt a sort of C19th side-saddle attitude, knees primly together to the left side, body slightly twisted so I can hold onto the tiny metal rim of the seat in front. 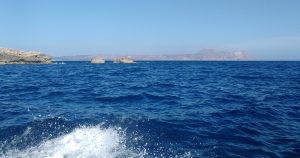 Georgios looks round, checks we’re all ok, and starts the engines. With a powerful thrum and roar, we are off.

And almost immediately I realise that the Victorian horsewoman thing is a grave error. ‘Cause it’s bouncy. I mean, like, really bouncy—kid being bumped on the see-saw, clear air between me and the seat bouncy—as we come out of the harbour’s shelter and encounter the west-wind-driven waves. The boat slaps and thwacks against them, dipping and jumping, risen at the front and down at the back; and the slapping lifts a pure white foam which is dazzling against the deep sapphire of the sea. It’s ridiculous, somehow, and thrilling: it’s better than the best fairground ride in the world: it’s the purest, most wonderful fun. I hear Jill whooping at the back, and wonder vaguely how Mum and Susie are handling it, but am too busy holding on to be able to worry. I laugh out loud from sheer delight and exhilaration. 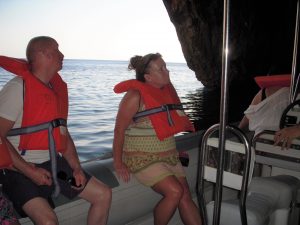 After a not-long-enough zoom up the coast we draw in close to the cliffs where a rudimentary clifftop hut was once home to a monk. I take advantage of the pause to get my leg over (as it were); Georgios looks round to see what the scuffling is about. ‘Is better,’ he says. He’s right. We look at some caves and hear some stuff about their formation and, though I look as though I’m concentrating, I’m not really taking in a lot of detail because the whole gestalt is so absorbing: the movement, the speed, the sound of the sea, the light sparking on the stretches of open water, the beauty of all the blues. These are delicious feelings, astonishing colours: the kind of stuff you see on holiday programmes or brochures but don’t expect real life quite to live up to.

And then, the swimming! Georgios expertly assesses the size of people’s feet, issues flippers and skorkels, and gives a quick Snorkelling 101. I’m a mixture of alarmed and gratified to find I’ve somehow been elected demo snorkeller, and am a bit nervous about using flippers (never done that), but obediently slide off the side of the boat where I instinctively relax as the water takes me. One of the great things about snorkelling is not having to worry about breathing, or holding your head above the surface. You can flop your head forward and let go into the experience. And I do. 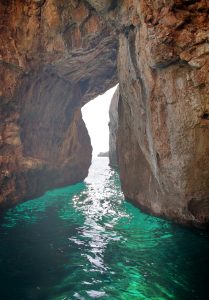 The waters are turquoise, clear, and a few metres deep. There are no particularly astonishing fish (‘Water is safe. No sharks’) but it’s the sense of being a privileged guest in a foreign medium which I treasure. Small fish, maybe the size of a child’s hand, in silver yellow with black fins and tail markings, hang in huge groups which stretch vertically through the water. Larger, white-yellow, flattened-ovoid shaped fish poke around the rocks and black clumps of sponge on the bottom. Tiny scraps of silver flick and flash near the surface in fours and fives; and longer torpedo-shaped fish, also silver-grey, drift and dart a metre or so down. I lose track of time, hanging there, absorbed and utterly content. I lose track of distance, too, and—being a flipper novice—am surprised to find how far I’ve swum by the time I surface.

Susie and I sit on the boat’s sides, or ‘balloons’, for the ride back to harbour. This is even more fun! I have my “outside” leg hanging slightly over the side, so that my foot splits the wash, which pushes and pulses against my sole, arcing and splashing noisily, and soaking me. Every so often Georgios looks round to see if we’re ok. We have that lovely sense of safe danger: it’s thrilling, but we’re being taken care of. We grin, and he grins back at us.

Years ago, Susie took me, my nephew Lem, and her soon-to-be-ex-partner to Corfu. The atmosphere was tricky, to say the least, and the partner turned into a sort of Ancient Mariner, buttonholing all sorts of people in bars, cafes and restaurants and trapping them with long, incoherent, drunken narratives. In the face of this Lem and I sought distraction and, one day, went with Susie for a go on The Donuts (those rubber rings which get towed behind speedboats). Afterwards Lem told me he’d looked round during the ride and seen a look of ‘angry determination’ on my face; which expression has rightly now entered the family lexicon, and makes me laugh even now because it was so spot on. I was fucked if I was going to fall off this thing, but boy was I not enjoying it. How marvellous, then, to have this trip, these moments: we’re all having to hold on, but it’s with happy determination. Susie and Mum are smiling. I smile too. I have a sense of us all feeling very alive, and glad to be so. 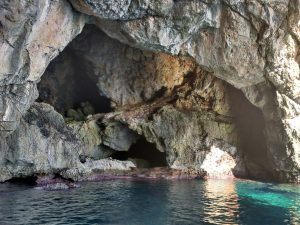 *For more about delight, have a look here.

2 Comments on thing 25: ‘swimming with the fishes’: sun, speedboat, snorkel