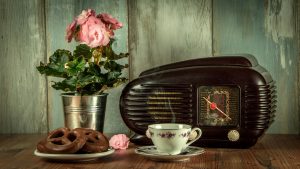 Your thing 26 parcel is currently in preparation and will be dispatched from the what the afternoon knows warehouse very soon. In the meantime, some news of an upcoming thing.

When I was on the course at Charney (see thing 17) a conversation with Paul, one of the facilitators, led to an invitation to come on the radio show he hosts, Calon on Books, on community radio in Wrexham. This definitely sounded like a thing! Not as terrifying as an abseil, or not in the same way, though I will have to watch my language as the show is live. It’ll be on at 6 on Wednesday 24th October, and you are warmly invited to listen in on the interweb, if you’d like to. Just go to calonfm.com at the appointed hour, and click the magic livestream link. Afterwards the show will appear on the site’s listen again menu, and Paul tells me there’ll be a soundfile I’ll be able to put up here in due course.

So, get the bourbons in; or possibly, given the hour of the broadcast, a sherry. I’d better save mine till after the show.