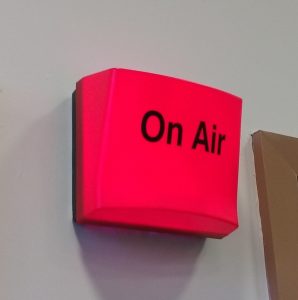 A few years ago I was interviewed in a sort of rent-a-therapist slot on Radio Cumbria; they wanted someone in the biz to say something vaguely intelligent for a “dealing with difficult events” programme. Getting the phone call from some BBC gofer I’d thought it was a wind-up, but there I was, about an hour later, sitting in my study being invited to pronounce on a variety of things down the telephone—and live on air. Surreal. ‘Ah yes, wise words’ the presenter said as she signed off on the session. Little did she know I was still in my pyjamas.

By contrast, thing 29 could be seen coming: I’d met Paul during thing 17 back in April, and was delighted when he asked me to come on his radio show Calon Talks Books. Books, music and a chance to talk about what the afternoon knows? This was a no-brainer. So as I set off from Dolgellau I was excited, in spite of the obvious doubt in Alison’s voice when I told her I was going to spend the day—the show was at 6pm— being a tourist in Wrexham. I Googled ‘things to do in Wrexham’. None of the results was actually in Wrexham. Hmmm. 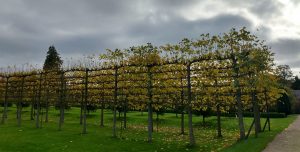 After some consultation I decided to take myself to Erddig, a National Trust property just south of Wrexham. The signs for it were so small and ill-placed that I wondered if the NT didn’t actually want visitors but after some nifty 5-point turns and a certain amount of swearing (best get that out of my system before tonight) I found myself driving up through the wooded, lushly-meadowed estate towards the house itself. I spent some time strolling the lawns, watching coots in their to-and-fro head-thrusting progress across the water features and admiring the neatness of the espaliered fruit trees. Just how much money would you have to spend to 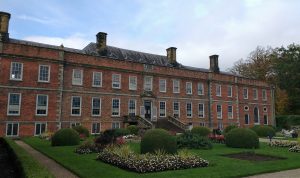 get this as your back door, I wondered? Then I had a walk round the wider grounds, through woods of heart-lifting loveliness where plump squirrels with undulating tails ran attractively hither and yon while leaves spiralled down from a variety of well-established broadleaf trees. At one point two dogs came charging towards me from some distance away; I delighted in the way the dogs’ ears flapped and circled—it seemed, joyously—as they pounded towards me. Less delightful were another two dogs—or rather, their owners, who let them shit copiously on the path and then used their Huntered feet to cover the turds with fallen leaves before half-heartedly nudging them slightly off-centre in the path. Hmmmm again.

After some very poor soup—essentially a few leeks shredded into their boiling water, which had been rendered cloudy by the addition of some greyish lumps of potato—I was back on the road towards the dream destination. A combo of Richard’s Route Planning Sheets and the satnav got me to my Air B and B; or at least, to the relevant street. Trying to park near the house itself proved surprisingly difficult, and reminded me of a trip to Telford years ago when I could see my destination from a variety of different angles but was funnelled helplessly round a labyrinthine roundabout system with (apparently) no exits which would take me any nearer to it. 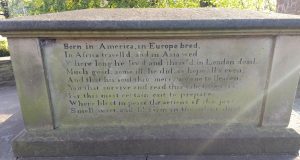 At last parked up, I rendyvooed with Paul and he took me for tea and a tour of Wrexham. He showed me the grave of Elihu Yale, a benefactor of the University named after him (whatever his academic creds, the verse on his tombstone, written by him, is still a bit dodgy) and took me to a quietly stylish café for tea. I had the sense he really cared about Wrexham but that it was hard to feel good about the town centre, which had had the stuffing knocked out of it by, among other things, the creation of so many out-of-centre shopping areas. He showed me one new development in which every single unit was vacant; across the way, huge signs were upbeat about The Development Concept. Something had gone very wrong somewhere. It felt like a sad place to be.

But soon we were bustling back towards the studio. So chatty and solicitous a host had Paul been that I was feeling a bit disconnected from myself—a bit out of my own process—and didn’t have time to feel nerves or, indeed, much at all before I found myself in the building where the radio stuff happened. My body knew, though, and I was on about my 4th anxiety wee before it was time to go into the studio. It was neat, practical and quite bare: there were ordinary-looking computers, that egg-box soundproofing stuff on sections of the walls, a small banked desk of knobs, dials, lights, monitors and sliding switches, and several mics angling across desks like inquisitive stork creatures from the Age of the Machines. ‘Is there anything particular you’re worried about?’ Paul asked. ‘Saying “fuck” live on air.’ ‘You won’t,’ he said. ‘Anything else?’ ‘Gabbling.’ Paul reassured me that he and Gwynn were old hands who would help me out if necessary. I thought of the friends who I knew would be listening, and felt comforted by that knowledge, too. 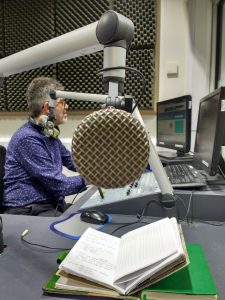 And then the red light was on! It was happening! Paul did the intro but my first track didn’t play on schedule, and I was thrown. We’d talked about how the conversation would all start from here—and now it couldn’t! Deftly Paul subbed in Joni Mitchell, which played while he brought Bach back from wherever he’d disappeared to; but things just slid and sped into a blur for me at this point. I was hot, sweaty and panicky, and had a sort of out-of-body feeling of having no idea what I was saying, and just having to trust that it wasn’t too inane. I felt safe in Paul’s hands but not in my own. The bit of me that was watching myself suddenly remembered how I can get myself into things other people describe as “brave” without actually stopping to think what particular brand of bravery will be required of me (cf abseiling). In this case I was up against my fear of being exposed in some way I couldn’t myself see—revealed to be foolish, insensitive, ignorant, unkind, self-obsessed or somehow, generally, just Not A Nice Person. You know that fear of unknowingly having your skirt tucked into your knickers? (Yes, I have done that. At a party.) Well, a bit like that, but about my whole self.

But somewhere around halfway through I relaxed and started enjoying it. This was me, the only me I have, the only self I have to work with—so I might as well go with it, appreciate being listened to and enjoy sharing some of my favourite pieces of music.* (A delicious if difficult process of choice, though, and I could probably end up with a different tracklist every week; only Bach and The Divine Comedy would be guaranteed their places.)** And by the end of the hour I really didn’t want to stop. I had a familiar post-performance adrenalised feeling: wanting to be alone to come down and process it, but also wanting company so that it would all carry on. The three of us shared a delicious meal (thanks, Paul!) and eventually, with an agreement to have a rematch in a year’s time, we parted. I went back to the quiet of my B and B where my (excellent) hostess nipped out of her room to greet me, apologising for not being there earlier and explaining ‘I was out at pole dancing class in Chester’. Well, of course you were. ‘That explains the pole on the sofa,’ I replied. They’d had a party at the weekend and the fittings had got broken, she said, ‘But, I go to B and Q tomorrow and fix it.’ It was worth coming to Wrexham for that conversation alone.

Sarah, my friend and fellow musician, once helped me enormously when I was giving myself a really hard time about a gig in which I hadn’t performed as well as I wanted to. ‘It’s a funny thing about performances’, she said. ‘I often find I feel one way about them at the time, but I can feel really different about them later on.’ And that’s how it was with this. About a week later I managed to listen to the show and was pleasantly surprised. I hadn’t said a quarter of the things I’d hoped—particularly about un-chosen childlessness, and coming to terms with middle-age; but still, I sounded like an actual human being with some thoughts and feelings and ideas. My friend David said I’d sounded like myself, Richard that I’d sounded thoughtful; Hazel said I’d been marvellous. I know they’re biased. I’ll take it anyway.

… And besides: relaxing and starting to enjoy it about halfway through, then realising I’ve done well enough? That’s pretty much what the afternoon knows, I think. It’ll certainly do for me. 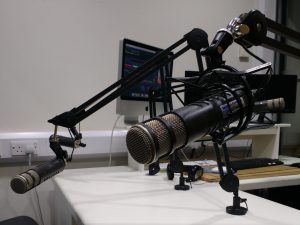 * The Calon Talks Books soundfile was too big to be uploaded in a one-er to what the afternoon knows, but—courtesy of Richard (always my technical lead!)—here it is in chunks:

abseiling and other things

what the afternoon knows and the writing process

having a full diary

Mary Oliver and the last word

** The music had to be cut from the recording, but I had chosen: ‘Sanctus’ from B Minor Mass, Bach; ‘Love What you do’, Divine comedy; ‘Everybody hurts’, REM; ‘Valiant for Truth’, Vaughan Williams; ‘Free man in Paris’, Joni Mitchell; ‘Insomnia’, Faithless; ‘Tune in, turn on, cop out’, Freak Power; ‘The Passing Show’, Ian Dury; ‘Red Dragon Tattoo’, Fountains of Wayne; and ‘Agnus Dei’ from Mass in 4, Byrd. Just click to hear them.

To read the Mary Oliver poem Gwynn talks about, have a look here.

And if you want to hear what I sound like in my jamas, you can listen here!

6 Comments on thing 29: ‘one person, and they’re talking to you’: a radio interview