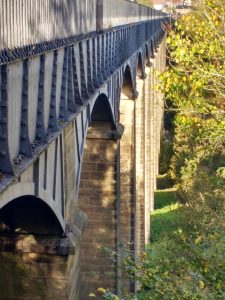 Unknown territory, of which I could definitely say there be dragons. I was going to Wales.

On my only previous visit I’d toiled up Snowdon in a whiteout (cloud, not snow), been put out to discover that some entirely able-bodied people had taken the train up (I mean, really) and then, that evening, shared with Susie a quantity of intoxicants sufficient to leave us spending what felt like hours in front of the telly, watching in a state of rapture the finest programme ever produced. When the credits rolled I don’t know if we were more disturbed to see the words “TO BE CONTINUED” (‘Nooooooooooooooo!’) or to discover that the epic which had thus entranced us was a low-budget TV adaptation of a Danielle Steele novel. Ah, the days of our youth… This trip was going to be different, though. Less rain, more being present to what I was actually doing.

I set off from Manchester with a rustling sheaf of route-plans written in super-large letters lying beside me on the passenger seat (thank you, Richard; though we did almost manage a navigation argument while Googling the journey). Despite having the plans, and satnav as backup, I was a bit nervous as I navigated the tangle of motorways which took me out of town. The M56 took me past the strange post-apocalyptic industrial dystopia round Runcorn. A few forlorn cows grazed a brown, balding field stranded between the motorway and the expanse of pipes, chimneys, pylons and vast, low, aggressively ugly buildings which stretches darkly across the horizon. Every time I see this, I’m shocked all over again—left sad and slightly uneasy. Brave new world this is not. 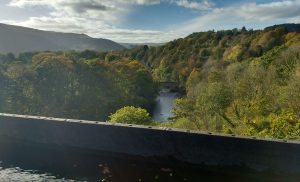 I was headed for Dolgellau to visit Alison, who I’d met during thing 17. She’d recommended a place to stop for a break, so I turned off the Llangollen road to have a look at the Pontcysyllte aqueduct. A Telford and Jessop production finished in 1805, it has 18 arches which rise 126 feet above the Dee valley, making it the highest in the world. There are no railings on the trough side, so boats have nothing between them and what Wiki rather wordily calls ‘the impression of being on the edge of an abyss’. Personally, I had quite enough abyss-ness on the other side, where the narrow raised towpath was bordered by “historical”—and hence non- 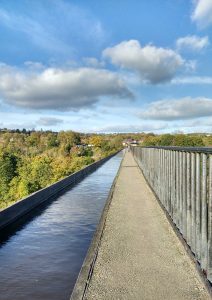 health-and-safety—railings. I strolled over, stopping now and then to look up and down and the valley and (very cautiously) peer below. A narrowboat entered the cast-iron water trough and chugged across. Seeing how little clearance it had, I was reminded of Bertie Wooster’s description of one of his large and formidable aunts who fitted into an armchair ‘as though she’d been told they were being worn tight around the hips this season’. The sky was blue and the sunlight had that lovely autumnal mellowness which gilds everything it touches, so that the turning trees and the still-brilliant grass down in the valley were warm and glowing in the clear air.

As I drove on to Alison’s, past the sun dazzle on Bala lake and through a gentle landscape tinted in ochres and russets, golds and bronze, I was overcome by a sense that this was indeed ‘the best of times… [that I] had everything before [me]’. It‘s a sort of quiet but ecstatic sense of promise, of possibility, which I often get when I’m travelling alone—an experience of liberation, and a feeling of untetheredness which sits just on the right side of lonely. I felt incredibly alive, entirely grateful, buzzing with excitement and energy. This is one of the things my own particular afternoon has come to know: the joy of adventure, no matter how apparently-small it may seem.

When I arrived at Alison’s house I was made very welcome indeed. It was a cosy, comfortable, friendly-feeling place, with a kitchen table just right for tea and talking, and a big, glowing stove sending warmth right through the downstairs rooms. ‘Come and meet Jim,’ said Alison, ‘he’s having some bottom problems at the moment so we’re keeping him off the beds’. Startled by quite how much too much information this was, I went cautiously through to the next room where I was relieved to realise Jim was a cat, not a husband.

Alison and I had a long walk the following day. It was really windy, so we decided against shivering and hunching our way along the Cader Idris ridge. Instead the plan was to describe a loop out from Dolgellau, passing the foot of Cader and the Cregennan lakes then dropping down beside the Arthog falls before crossing the long bridge over the Mawddach estuary over to Barmouth, where we’d catch the bus home. I was a bit nervous about the boots, what with the Right Little Toe Situation on the pilgrimage, but I figured that as I’d lost the toenail already, perhaps that might help. We would see.

It turned out to be a lovely walk (the toes protesting at c. 7 miles, but never getting as far as screaming). Though we were minus the golden light of yesterday, still it was wonderful to be out in the largeness of the world. Having climbed out of Dolgellau we took an old drovers’ road which wound its way across fells bronze with end-of-season bracken and dotted, here and there, with remarkably clean and fluffy sheep. The top of Cader was swathed in low cloud and the combination of this, the strong wind and (in parts) a stiffish climb meant it was one of those walks 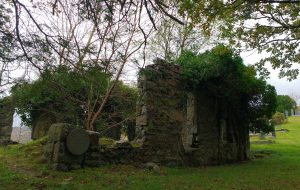 where we were taking fleeces off and putting them back on with some regularity, faffing about with packs and straps and all that stuff. We reached King’s Youth hostel, where Alison used to be warden, and stopped for a biscuit break before climbing again through a broadleaf wood, all copper-gold and scrunchy underfoot. Just as we left it, we came upon a ruined Wesleyan chapel and small burial ground of a peace and loveliness which even Chris de Burgh couldn’t have ruined.

Lunch was a very satisfactory affair featuring home-made bread and a delicious home-made chutney so luminously yellow the sandwiches were probably visible from space. We ate looking over the estuary, enjoying the first view of bridge number two, but didn’t linger as we were cooling rapidly. 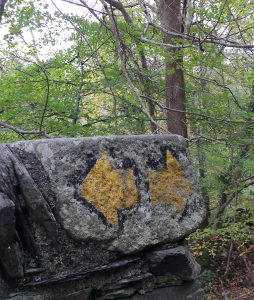 We picked our way down a steep, hair-pin bend-y section of road—apparently any driver you see going up it will be big-eyed and white-knuckled with stress—before crossing a few fields, finding some stepping stones across a stream and wandering down beside Arthog falls: more rustling, leaf-fallen woods, and the always-lovely sound of moving water (well, always unless you need a pee). I particularly enjoyed the helpful waymarking.

The oystercatchers were kleeping and fussing as we strode across the long bridge over to Barmouth; the water was low and boats and buoys sat on sandflats which glinted wetly in the weak light. We found a café where Alison bought me a huge slab of millionaire shortbread—an outstanding chocolate/caramel/shortbread ratio of more or less 1:1:1—and shared a pot of tea while looking at the map and reviewing, with satisfaction, the ten miles we’d just covered.

Alison ate her apple on the bus home, thus avoiding the whole taking the fruit out for a walk thing I can so often end up doing when other, more carbtastic treats are on offer. I, meantime, sat quietly, enjoying that I’ve been used feeling your legs have after a decent walk, and conscious of how good it was to be in the process of making a friend. Meeting new people can be much rarer once you’re a “grown up”, particularly when you work on your own; it can also be different, and difficult, socialising as someone who isn’t part of a 2.4 unit. I looked out of the window as the valley flashed past—this was a bus driver enthusiastic about his job—and thought about how the fifty things have already expanded my life, bringing new places and people and things, yes, and also enriching relationships already there. How glad I was to be doing this. Good thoughts to have on the eve of thing 29, when what the afternoon knows would take to the airwaves… 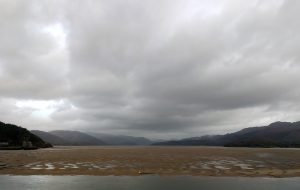 For more on the allure of travel, have a look here.

2 Comments on thing 28: ‘into the new place out of the blue’: a tale of two bridges