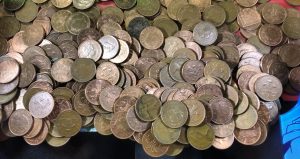 Of late my memory has become a sort of penny falls: I put one new thought in and several others get pushed out to make room. Unfortunately the displaced items don’t fall usefully into that collect-your-swag slot where you can reach down and reclaim them; they slide instead down that chute-to-oblivion at the side where those promising, teetering piles of coppers used to end up. That thing I had to remember… What thing? Did I have to remember something?

This whole penny falls thing—I loved them when I was little—may be part of why, when I was thinking about my next Artist Date, I suddenly wanted to go to Morecambe and play on the slot machines. The Artist Date is recommended by Julia Cameron in The Artist’s Way, the idea being that you take your creative self on an outing of its choosing—just you and her/him—and the stimulation thus experienced helps top up the well of images from which you draw when you’re creating. The AD can be anything, provided that your artist/child/inner creator wants to do it; and I’ve seen some interesting and moving exhibitions already on these dates, had some lovely walks and experiences. But I’ve managed less of the simply fun and frivolous, so when this idea popped into my head, I knew it had to be done. 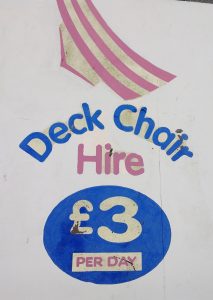 And thus I found myself walking along Morecambe Prom on a cloud-scuddy, sometimes-sunny Saturday afternoon. A stiffish breeze shoved gulls about the sky and an unappealing brown-grey sea was hurrying in towards the shore. There were cyclists, dog-walkers, families with buggies, a middle-aged couple pushing a rug-swathed relative in a wheelchair. A wall ran alongside the walkway and I hopped up and walked along it; there was something sad-sweet familiar, a body memory, in the rhythm of dismount/remount at breaks in the wall, and the way I had to place one foot in a straight line in front of the other as I walked. There was no Dad or Grandpa to hold my hand and steady me, and the getting up and down was definitely more effortful on the thighs than 45 years ago; but I still enjoyed it. I also enjoyed watching an actual toddler stop to examine something she’d spotted on the sand: the way her parents waited patiently, and how she didn’t lean over from the waist, as we less bendy grown-ups tend to, but hunkered easily down, bottom close to welly-clad heels, holding herself naturally, steadily, lost in her contemplation of whatever everyday treasure she’d found. 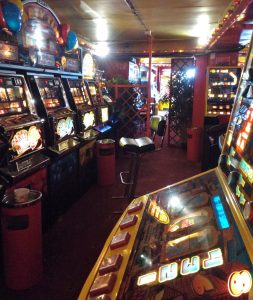 I passed rows of tired-looking guest houses (“sea view!”; “flat screen and tea/coffee making in all rooms!”) and was then into the more commercial area: an unuplifting mix of pound-, charity- and “antique” shops, and a few different arcades. I wandered into one but there weren’t any other punters and, feeling self-conscious under the gaze of the man in the change-booth and his mate, after a swift circuit I legged it. A bit further on I found a larger arcade: bright lights, “fun for all the family, and Air Conditioned”. This was the place for me. I walked in and felt assaulted by blare aural and visual: lights blinked and danced, screens flashed, and music, jingles and machine noise were overlaid with the shouts, squeals and occasional admonitions attendant on family fun. Did it used to be this noisy? I wondered. Was that why Mum would often stay at home when Dad took Susie and me for rare, delicious Daddy time at the “carnies” in Aberdeen? 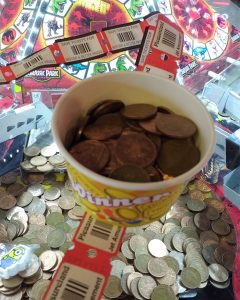 Acclimatising, I moved further into the arcade, passing change dispensers, penny falls—tuppenny and ten p, rather—reel machines, space invaders, those grab-n-get dangling claw thingies, and all sorts of other new-fangled stuff I couldn’t understand—dials, knobs, joysticks, steering wheels, and orifices spewing perforated lengths of tickets which (apparently) meant Better Prizes. I didn’t feel totally overwhelmed, though, and after a while was ready to get out my carefully-hoarded £11 stash of fifty ps. The kerchunk-chunk-chunk of the change machine disgorging £1.50’s worth of two pences was pure time-travel. I collected them in the paper cup provided—garishly Disneyfied, but at least it was paper—and enjoyed still another sense-memory: the weight of coins in the hand—so satisfying! such a feeling of wealth!

I had a few tentative goes on the reel machines, but they were both bewildering and greedy: their flashing lights were hectoring and I couldn’t tell what would be a winning line, let alone how to nudge, hold or do any of a number of other things to achieve it. I lost a few 50ps very quickly and in the sad absence of cherries (triple cherries was always exciting) gave up on those. I was disappointed to find no proper one-armed bandits, having looked forward to reliving that experience: the satisfying fit of the ball on the end of the lever in the palm of the hand; how you pulled it down and felt the gears engaging at the bottom of the pull, with that rich mechanical noise; then the release and thunk back upwards of the lever and the accompanying thud-thud-thud of the reels falling into place, followed—ideally—with the exciting metallic tinkle of pennies falling into the winnings drawer, just the right shape to accommodate your eagerly-scooping hand… There was none of that. I didn’t find any of those horse-race ones either, or racing cars: the only things reminiscent of the Aberdeen arcade—or indeed the Morecambe arcades of my childhood holidays—were the tuppenny/ten-p falls. So I stuck with those. 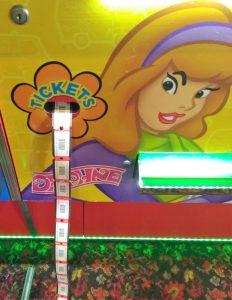 I tried several, including those flicky-up ones where paddles in endless, strangely elegant motion flip your tuppence up to the top layer. I was confused to find that, though some two ps were cascading from layer to layer, none was falling in my direction. After a while I realised that the noise I was hearing was the whinnying laugh of Scooby Doo telling me I was a ‘three/four/six ticket winner’. Do what? I looked up to see a notice reading “THIS MACHINE PAYS TICKETS ONLY”, then down to see Daphne watching, one eyebrow raised, as my better prize accumulated in papery lengths on the floor. Not having that, I thought, and moved on. 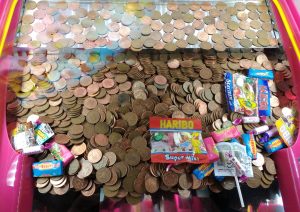 At last, though, I found the machine for me. “Sweet success” it was called, a tuppenny falls where the piles of coins were supplemented by proper, 99% chemicals, childhood treats: Love Hearts, Refresher chews and Fizzers—those small tubes of strange, chalky sweets whose different flavours, denoted by purples, pinks and whites, bear no relationship to anything else in the known universe but are nonetheless strangely delicious. Yes. Oh yes. I refilled my change cup and settled in.

And it was marvellous. Never mind that the coin-chutes are no longer movable—the strategic positioning of the chute was part of the skill, back in the day—or that intermittently the machine would blare the first five notes of ‘My boy lollipop’ at me. There was still the same challenge of timing the coin’s release so as to avoid it landing, to no avail, on top of those already there; still the same moment’s tension as to whether it would be absorbed, or would push coins down a layer and thus nudge the leading-edge coins over the brink; still the same, tantalising lifted lip on the edge to delay the moment of payout and encourage you to put another coin in—just one more, just one more… But this was the 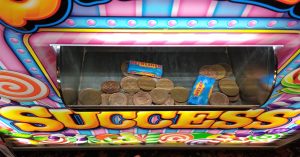 only machine I found where you did actually get regular cascades of money coming back at you. And not just money: sweets too! How I’d’ve loved this when I was little, I heard myself think. Then, instantly, I corrected myself: Hang on: how I’m loving it now! Though no other middle-aged woman was thus absorbed by Sweet Success, I simply didn’t care. The concentration required, and consequent absorption; the freedom to spend as much time and money as I wanted; the satisfying bulge of pockets as I accumulated sweets… A reconnection with a far-distant childhood self was combined with the autonomy of my fifty-one-and-a-half-year-old self, and the result was absolutely magic. I was transported.

After a good couple of hours’ entertainment—not bad for eleven quid—I repaired to Rita’s Café next door, where the “specials” were written out on those fluorescent card-shapes with pointy, ta-daa! edges, and people were ordering roast dinners at 4 in the afternoon while drinking thick brown tea out of thick white mugs. When in Rome, I thought, relishing a builder’s and a slice of “Lumpy Bumpy” (“RITA SAYS GO ON TREAT YOURSELF”). So what with one thing and another I was on quite a sugar high as I wandered back down the prom, pausing every now and then to unwrap a Refresher and notice the day’s final sense memory: the jaw-ache you get when you’ve had too many chews. Like Withnail, I would have to admit, ‘I feel unusual’. But the chemicals were all part of the warm, warm glow of happiness with which I started the car and pointed it north, leaving the lights and the noise and heading back towards the Lakeland fells which, from across the bay, were gently, silently, summoning me home. 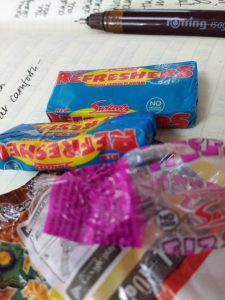 You can read the poem from which this post’s title comes here.

4 Comments on thing 35: ‘the centre/Where we dance, where we play’: a trip to the arcade