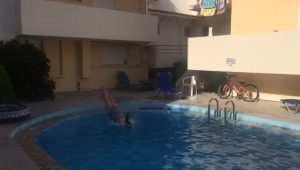 “Master, I am puzzled.” “That is the beginning of wisdom.”*

Eleanor didn’t exactly say that, of course. But this particular Grasshopper was struggling. Accepting I was struggling was the most useful thing I’d managed so far.

Sitting at the pool side watching Eleanor dive with the lithe, apparently effortless grace with which she does all things physical had woken in me a fair amount of envy and uncharitableness (I could just manage to stop short of malice and hatred). Not that they were directed at her, mind. I was just a swirl of different griefs about relinquishing youth, the 2.4ish things that have never happened, and the freedom, comfort and confidence I’ve rarely felt in my own body. Then I heard some words. “D’you think you could teach me how to do that?”

Sorry, what? Grasshopper surprises herself.

When I was at school, swimming lessons took place in the Bon Accord Baths in Aberdeen, where the water was cold, the pool attendant/teacher deeply creepy, and you always had the feeling that there were leftover verrucae lying all over the floor just waiting to attach themselves to your waterlogged, defenceless feet. I’ve repressed most of this but I do remember that Ernie—no idea if that’s his real name, but it’s what he’s called in my head—used to use a boat-hook to catch hold of the crossed straps at the back of your swimming costume as you flailed along, and would pull, lift or dunk you by them. Yeeeeeuuuuccchh. There was picking bricks up off the bottom of the pool and jumping in in pyjamas so you could practise your lifesaving skills, Ernie attending with his boathook all the while. Can’t help feeling he might be on some sort of register, these days.

Under these circumstances it was hardly surprising I hadn’t learned to dive. Rows of us were sat along the edge, hands earnestly clasped and pointed, tipping in one by one with more or less skill but never receiving any individual feedback to help us improve. I’d concluded long ago I couldn’t do it. But I always wanted to. So when Eleanor said she thought she could teach me, I found myself getting to my feet and splashing my way into beginners’ position. Grasshopper apprentices herself.

The pool at the apartment block had a small, shallow area separated from a larger, much deeper section by a row of raised blocks—sort of like battlements. I sat on a battlement, Eleanor on the next one, and she talked me through it: legs apart, feet flat against the wall, hands in position, just sort of roll off. My middle-aged knees didn’t really want to flex sufficiently to get my feet high and flat against the pool wall. Thwack, splat, splash. Belly first. Not enough roll. I tried again. And again. Eleanor was so encouraging. Her sensitivity, patience and kindness had me tearful with gratitude, though fortunately the amount of water already around did disguise that.

After a while I progressed to crouching. Both she and Jane watched, applauded, commented, encouraged. Those times when I surfaced to find them going “YESSSSSSSSSSSS!!!!” and whooping encouragement were a high better than any drug I’ve ever tried. My confidence grew and by the end of the first session I was going in from a high crouch, or low bend, whichever way you want to look at it. I was also starting to realise how you have to point your head down, keep it between your arms, push off, aim, bring your legs up behind you like Flicka the pony having a post-feed protein rush… Gee. So many things to be aware of. Think about my legs and I’d splat in on my belly. Point downwards sufficiently and I’d forget to jump. But by the time we’d maddogged it far enough into the noon hour to make retreat inside a good idea, I felt pretty proud of myself. Grasshopper thanked the Master, and engaged to carry on, later.

Like the abseiling last year, the whole process was connecting me with my damage: the quivering, expect-to-be-humiliated, terrified of “failing”, self-conscious youngster who still lives inside me. Add to that the baseline fact of having my middle-aged, some-places-saggy body out in public in what is essentially underwear, and that’s a whole lot of unease to contend with. There were a couple of moments when Eleanor laughed and, though she assured me it wasn’t at me, still the paranoia kicked in immediately: I felt craven, utterly vulnerable, and possessed by a horrible mixture of fear and vicious defensiveness. Even if I could have begun to convey all of that, it really wasn’t her problem to deal with, so I just had to manage it as best I could. I couldn’t have asked for greater en-couragement than I got from them both. Still. “Have you a burden, Grasshopper?” “It is my thoughts that carry the weight, Master.”

But then there came a point during the day’s second session where I was going in from more or less upright and surfaced to hear the Master, floating on her doughnut at the far end of the pool, simply say, with a big smile, “Yes. You can dive”. I was ecstatic, and did a sort of generic successful sportsman’s hands high in the air thing (quite tricky in deep water, and with a gammy shoulder) combined with a sort of underwater ecstatic run, jump and fist pump (ditto), and bellowed with triumph and pride. Even now, recalling Eleanor saying that brings back the tears: gratitude, pride, wonder, relief, sorrow, joy. The whole shebang. Completely overwhelming. “Diving’s really addictive,” Eleanor observed, as I plunged, climbed out, plunged, climbed out, plunged again… She’s not wrong. But eventually I had to give in to how totally knackered I was. When we’d got back into the apartment, showered, thought about where to eat that evening, had a glass of wine, I shared my joy, Whatsapping some significant people and sending them the short but wondrous video of me actually diving. I lay awake that night—not obsessing about cockroaches, as I had been the first night (my bed was in the kitchen/dining area) but smiling to myself in the dark and saying, “I can dive. I can dive”. I didn’t need to write off my body, just yet. I was so very happy.

However, the following day I seemed to have forgotten how to do it. I took myself out for some desperation-fuelled practice mid-afternoon and, although I pounded and splashed, I was feeling a bit concussed and strange and realised I must be doing something wrong. When Jane and Eleanor joined me later there was the same kindness as yesterday but there were also many helpful and tactful pointers about things I needed to remember. Inside, I ricocheted from joy to despair, feeling panicky and frightened and fighting tears. When Jane was doing the aftersun anointing that evening, I blurted something of this out. I felt so exposed—as an ungainly, lumbering and hubristic physical incompetent but, worse, as someone utterly immature in not being able to hold my own feelings or cope with “failure”. Somewhere deeply encoded in me is the belief that if I’m not The Master, I’m despicable, unlovable, useless. Grasshopper is nothing. This was the pit I’d plummeted into.

Jane made some eminently sensible comment about the normal trajectory of learning.** I managed to put that in some mental in-tray and, after a brief, hysterical cry (which I muffled into my hand towel while Jane was outside and Eleanor in the shower) I managed to hold myself sufficiently to enjoy the evening. Over the next couple of days I was glad to be able to practise some more, soaking up encouragement from Eleanor and Jane as a rusk soaks up milk. With help, I clawed my way out of the pit. Some parts of me just need a lot of reassurance. I wish that wasn’t so, but it’s true. I was lucky enough to be with kind people who would offer it.

As I think about all this now, I feel more able to see that the blurt of which I was so ashamed might actually be something I can be proud of, in that I was doing my best to be less on my own with my experience: that was me looking after myself, no matter how embarrassed and awkward I felt. But, more than that, I realise that the whole thing wasn’t just about learning to dive (which I can do, by the way! ). It was about learning to learn (again!): being ok with not knowing. Accepting that it’s okay to be Grasshopper, and that puzzlement may indeed be the beginning of wisdom. 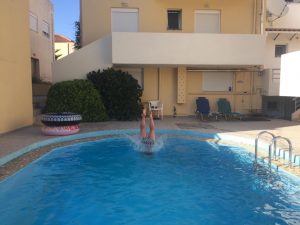 *Remind yourself of the deep, splendid, silly joy, the gnomic not-quite-nonsense of Kung Fu here, on Youtube.

**For more on learning, have a look here.