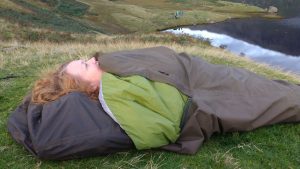 Silent, upon a peak in Cumbria.

Or to be more precise: intermittently rustling, upon a peak in Cumbria.

Or to be even more precise: intermittently rustling as I shifted around inside in a bivvy bag on a flattish grassy hillock overlooking Easedale Tarn on a clear early autumn night. In Cumbria.

Sleeping under the stars was one of the first things I’d known I wanted to do when the idea for the fifty was born, and I was thrilled when my friend Glenn said he’d induct me into the art of bivvying. Glenn’s a bit of a Snufkin. In the most wholesome way, he sleeps around a lot, going to festivals and gatherings of all sorts, taking himself on trips great and small and being highly skilled at sleeping tidily and impact-free, both outdoors and within the confines of his car (there’s a whole system with a breadboard to go over the handbrake—gives you more length, y’see—and myriad other cunning refinements). So he was definitely the man for this job. 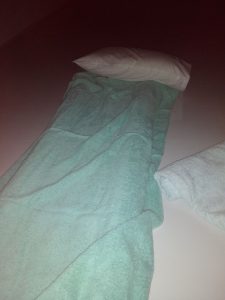 I’d had a go at sleeping under the stars last year in the villa in Crete, where the light pollution was reasonably low and the villa had a flat roof where I thought I could kip down if I first slathered myself in insect repellent. It was warm enough to go cover free but the only thing I could think of to sleep on was a lilo. I wrestled the uncooperative beast up the tight metal spiral staircase to the roof, where I covered it with a towel and lay down. It’s much easier getting onto a lilo on a roof than in a pool; and it was certainly more comfortable than just lying on the concrete, which I’d done for an hour or so the last few nights. I thought it might be a go-er and could feel myself starting to relax. I hadn’t reckoned, though, on what happens when you move around on a lilo: with each slight shift in position came a noise like a balloon artist squeaking out a giraffe or dachshund, while turning over sounded like the entire Cretan Balloon Artists’ Society making the contents of Noah’s Ark. This wasn’t happening. Disappointed, I towed towel, lilo and pillow back downstairs, resolving to try again when conditions were more favourable.

After that, Glenn and I planned several dates for my maiden bivvying, and talked about locations. At some point we fancied going to the Dark Sky Park at Kielder, but for ease (forgive the pun) we lighted upon Easedale, as being get-to-able at reasonably short notice and likely to be fairly dark. Possible dates came and went: there was cloud, there was pissing rain; family emergencies happened; one or other of us had to go away. We were hopeful about a weekend in late July until quite near the time, when all weather forecasts—you know when you look at all the different sites, hoping to find, and then believe, the one which promises you fair weather?—were predicting rain. The Met Office offered us a ≥ 95% chance of precipitation. We wanted to see stars. We accepted defeat. 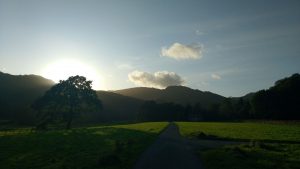 But now, at last, it was Wednesday, we were planning to go on Friday, and we were promised clear skies at least until the early hours. When I realised it was actually going to happen I also realised I was a bit apprehensive. I’m not sure exactly what about, but I was. Patiently Glenn talked me through what I might need. We agreed on who would bring what food and, once we knew what time sunset was, reverse engineered a time to set off. As we climbed into Glenn’s car I felt giddy and a bit nervous; but it was mostly what Clive James calls ‘safe danger’ which is, at its heart, slightly pleasurable. I knew Glenn knew what he was doing. 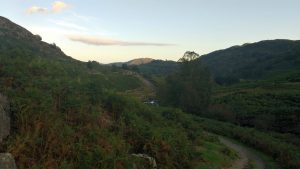 Leaving the car at Glenthorne in Grasmere, we started the walk-in. Going along the road for a bit, we soon turned right on a (for once) well marked path, along the base of Helm Crag and slowly climbing towards Far Easedale. This was where I’d met all those sponsored walkers when I went to the Tarn way back in May; this evening, however, we had the stony path and mellow light all to ourselves, except for the Herdies and the odd, darting bunny zooming off into the bracken for cover. A burn ran to our left and the lowering sun was gilding the Crag’s heights to our right. After only a half hour or so we could look back to see a beautiful, empty, lush landscape behind us: such a pleasing sense of remoteness for really not much effort. Somehow the view reminded me of pictures I used to draw when I was little, with hills coming in from one side then the other, alternating, stretching off into the distance. 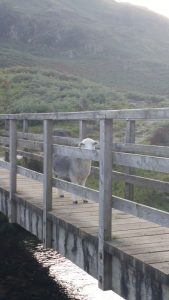 A Herdy on a footbridge made me think of the Billy Goats Gruff, but fortunately there was no troll to negotiate with. Crossing the bridge, we bore left and more steeply up, round Stenners Crag and the splendidly named Cockly Crag. The ground was boggy but there was a clear trail of stepping stones, punctuated by stiff clumps of fescue and glinting peat-water pools. ‘We’re nearly there!” I said excitedly and, as we climbed the last section alongside Sourmilk Gill and rounded to where the Tarn could be glimpsed, I felt a strangely proprietorial pride in ‘showing it’ to Glenn for the first time.

And it was breathtakingly beautiful. The sun had set behind Slapestone Edge maybe three quarters of an hour before, so we were seeing the tarn in the gloaming. Reflected in the water was the bowl of hills in which the tarn is cupped. The gleaming, gold-silvered surface was pockmarked with many widening ripple-circles where fish were rising. A few tents were pitched here and there around the green and brown south-western edge of the tarn but there was still plenty 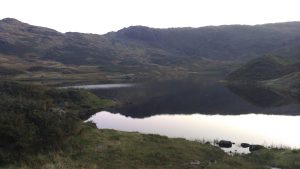 of room to find a spot which was just ours. We faffed around, deciding where we might have the best chance of seeing sunrise, and eventually chose. I put my pack down and looked at Glenn, in a now what? sort of a way. But there isn’t really much of a now what? with bivvying. That’s the whole point. You get your bag out, unroll your sleeping mat, and put it and your sleeping bag into the bivvy. There we are. Job done.

There was something so pleasing about this. I looked at Glenn in delight. He beamed back at me. He was kind enough to give me the more menopause-friendly bivvy—it unzipped laterally, as well as up the side, whereas the other one only had one central zip, like the bottom bit of an autopsy’s Y-incision, which I didn’t fancy at all—and this turned out to be a great blessing. (Hot flushes are possible even sleeping outside in late September, I discovered.) 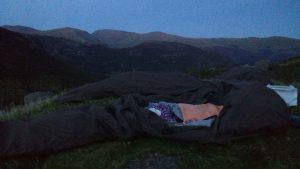 We loaded our packs, boots and other things into the bags’ hoods. I wasn’t taking any clothes off—was already getting chilly—so I pulled my leopard-print jama bottoms (it had seemed very important that I bring those) over my trousers, replaced my walking socks with furry sleeping socks, and added a couple of extra top layers. Then I inserted myself into my bag, giggling. This was so silly, somehow, and so brilliant! I couldn’t stop smiling.

We shared some food, mostly in silence, watching the campers, the water, the sheep and the last gleams of light draining from the sky. The sky’s blue deepened until the first star pricked into sight, to the north. I squealed with excitement. “What’s that over there?” I asked, foolishly; for what else could it be but the moon? It rose in glorious 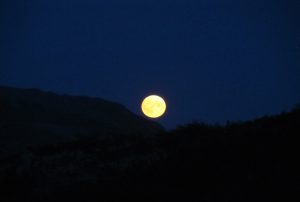 fullness, deep yellow-orange at first then settling into its usual gleaming silver-white. By this time we were lying down to keep warm, and it was a truly magical experience to be lying there, cosy in the cold, watching the vastness of the night and the universe reveal themselves slowly, inexorably. We saw a lot of satellites blinking their brisk way across the heavens, and a dismaying number of planes. We also saw a couple of shooting stars. Just when it couldn’t get any better, Glenn said a poem* (he’d be a great person to be marooned with: knows a lot of poems by heart, and speaks them simply and beautifully) then segued into the Carl Sagan piece,** which I’d never heard before. The whole experience was the essence of Romance: not the romcom sort, but the awe-ful, sublime, nature, beauty sort. My heart couldn’t contain all and I burst into the kind of tears which are about everything: joy in creation, wonder at it, fear of our tininess, relief at our tininess. We are everything and nothing at the same time: the vastness of creation exists and we have the infinitely unlikely, infinitely great privilege, for our brief, flickering lifetime, to be part of it. Silently I wept, upon this peak in Cumbria. 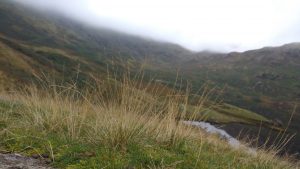 And yes, I slithered around in the night inside my bag—I had to do a sort of Brian the Snail thing to try to get my sleeping mat back underneath me—and (as I discovered in the morning) slid rather too near the edge of the hillock we’d been sleeping on. And yes, I had to stumble around in the moonlit dark to have a pee; and I didn’t sleep soundly: there was a lot of unzipping and re-zipping as my hormones did their nightly crazy coursing through my body, and I couldn’t exactly say I felt rested. But the quiet companionable shape of Glenn zipped up tidily, sleeping or waking just a few feet from me; the wonder of opening my eyes to see the stars and, later in the night, the cloud-washed sky; or sitting up every 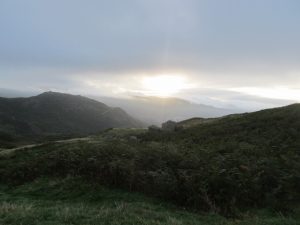 now and then to ease my shoulder and see the near gleam of resting sheep and feel the silent presence of the water; waking to see the cloud and mist gathering, rising, lifting from the water; to see the sun climb clear of the cloud and light our path back down Sourmilk Ghyll and across the brilliant, dew-sparkling fields… all of this wasn’t a new planet swimming into my ken, but a new perspective on the old one—a waking again to the wonder of the world. A new experience, too, to be walking-out and back into Grasmere as others were setting off: I felt privileged, a teeny bit smug at my rock-hardness (well, y’know; a woman of the mountains at a new level), exhausted, exhilarated.. I knew, too, that I’d be googling bivvy bags later. Sleeping outside is definitely something I’ll be doing again.**** 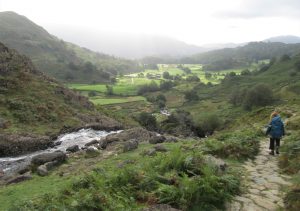 *You can read ‘When I heard the Learn’d Astronomer’ here or have it read to you here. Not by Glenn, though. Sorry.

**Remind yourself of the Carl Sagan piece here.

***And here’s another wondrously beautiful vision of life, the universe and everything.

****It is of course a very different thing to be sleeping outside by choice, in good weather, somewhere beautiful, where you feel safe, with a friend, from sleeping outside because you have no home. I realise I enjoyed the inestimable privilege of choice.