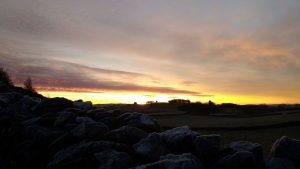 Up before the sun. Who ever thought I’d be celebrating that?

When I first imagined doing 50 things, watching sunrise was one of them: I had a romantic notion of being somewhere warm enough, and verdant and lovely, preferably with a long view; there would be a flask of tea and a sense of wonder, perhaps with a side of epiphany. But that particular version of up-before-the-sun never materialised, and that’s partly because of a new routine I’ve been into, at least some days of each week, for about 18 months now, which means that (in the winter anyway) I’m regularly up and about to see the sun rise. Such a lot of good stuff has come from this that I knew it deserved honouring, not least because it’s an everyday extraordinary which doesn’t cost a thing. Well, not money, anyway.

…because I don’t love the actual getting up bit. I’d say there’s about 1 day every 3 weeks (if I’m lucky) where I spring, as it were fully formed, from my bed and do that loose-limbed semi-running downstairs thing to turn the alarm off. Mostly I’m Franken-limbed and lurchy, a crumpled, ill-favoured creature assembled from parts which don’t as yet seem to go together. The alarm has to go downstairs otherwise the snooze would be deployed, and even so there is still the occasional desperate day when I lie to myself and take the phone back upstairs “just for a while”. But usually once I have been untimely ripped from sleep I can drop into the grooves of my morning routine and the day is off and away. 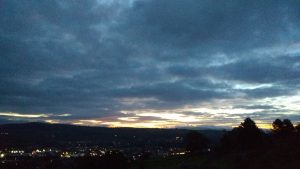 A morning routine is something a truly extraordinary number of people have something to say about on Youtube—what should go into it, why it is so important. Certainly there seems to be a fair amount of research to suggest that the early hours are times when our brains function optimally and, therefore, that we can get a lot done, and done well. There is less consensus about what should constitute a Morning Routine (though I can confirm that wilfing around on Youtube watching videos about morning routines is not something useful in your morning routine). It’s taken me a process of trial and error to find what works for me (which is: morning pages, walk, make coffee, 15 minutes’ silence, eat if I’m hungry, start writing). Routine minimises the number of choices I need to make when I’m Frankenish and quite possibly a bit grumpy. It’s easier to get out of bed if I don’t have to think or decide anything for a while.

One thing the soi-disant gurus agree about is that you have to know your “why?”: what matters enough to you to make you leave the womblike warmth of your bed and engage so early with another day? The motivation has to be yours, not borrowed from someone else. For me, it turns out to be connected with the combined griefs and joys which underlie what the afternoon knows as a whole: coming to terms with being middle-aged and having less time in front of me than behind me, and the consequent desire to make the most of what time and talents remain. Larkin 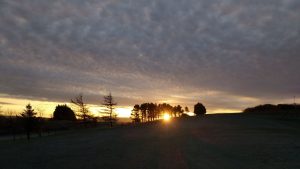 has a devastating image in ‘Aubade’ (which, it occurs to me, means, “a poem of piece of music appropriate to dawn or early morning”): he talks of ‘time/ Torn off unused’. A slightly less self-condemnatory image comes to my mind, though—of time which has got a bit crumpled and grubby in my pocket. I’ve got more of that than I wish, and I don’t want to crumple any more. I don’t believe anything is “wasted”, nor do I want to go down a cul de sac of self-reproach about the hours, days, years when I haven’t been in a place to do everything I might want to have done. But I do want to make sure I do everything I can with whatever remains.

So, given that my daytime is taken up with client work, teaching, facilitation and so on, when I’m up with the lark I get myself out in nature, and then I write. Despite what some productivity Experts say, I don’t want to give this precious, carved-out time to “Eating the Frog”. I do what I want to do for me, and the tiresome froggy admin can wait. It would be seriously grandiose to think that I have a teeming brain of the order of Keats’ which might need gleaning;* but I can relate to the feeling. I get my pen out and I glean what there is to be gleaned. I’ve written more, and more fluently, since I gave myself the gift of the early morning in which to take my creative work more seriously. 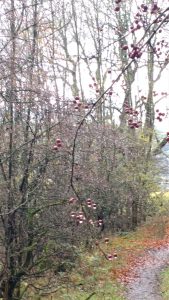 But it turns out there’s a lot more to up before the sun than simply getting more writing done. There is a strange sense of specialness, of having a private treasure, to be found in being awake when others are asleep. In winter I sit at my desk in a warm pool of lamplight: not just a pool, a private island, surrounded by dark and quiet. I feel the morning is mine alone, and have a great sense of potential, and privilege: of delight, of promise: the whole day stretches out, unused, before me. As Allan Jenkins suggests in his lovely book Morning: How to Make Time: A Manifesto, there is something about early rising which gives you a sense of having somehow made time, as well as made more of it.

As I sit in my silence, or write, or walk out in the wood and fell, I get to hear the night birds clock off, and the day ones clock on. In the summer I’m not up early enough to see day arrive, but in winter when I set out on my walk I go out into the pregnant darkness and there is rarely anyone else about, so I get a private show of the beauties of night as well as of daybreak. I find I take a peculiar satisfaction in walking in the dark: getting away from the streetlights, letting my eyes adjust, doing a fair amount of slithering about on the rain-muddy tracks but also finding that my feet know their way around the woods and fell really rather well now. I know which bits are particularly slippery; where a rock sticks out; where a swooping ash will stroke me gently on my shoulder as I pass. I exchange greetings with the sheep while they are still couched white blurs in the dim, grey-green fields; I hear squirrels rustling, and startled blackbirds chuck-chucking in alarm as they zoom up from the dark track before my feet. The other morning I heard an unexpected sound overhead and looked up to see a flock of hundreds of birds (field fares?) pass overhead on some birdy, dawn mission—in silence, apart from that great wild 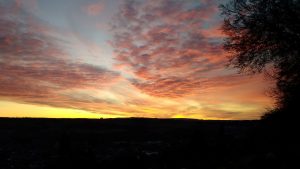 whirring of wings. I was filled with joy. But even without such particular gifts I regularly get to see the everyday, extraordinary beauty of the changing sky as day approaches. And sometimes, when it’s still really dark, I even treat myself to the illicit, private pleasure of capering around on the golf course’s greens—something I’d probably be put in the stocks for if staff or Members caught me at it in daylight.

Allan Jenkins gets up a lot earlier than I do, as do many of the people he interviews in his book. I like the idea of being up at 4 or 5, but in reality, at the moment anyway, that’s not happening for me. I have to have enough energy, concentration and compassion to meet my clients with the focus and care they deserve, and I wouldn’t have that if I got up any earlier; as it is, I’m turning back into a pumpkin by 9.30 or 10 in the evening. So I feel a bit envious of those who are in a position to get up in the even smaller hours and then have a restorative nap in the middle of the day. But until the time I can do that, I can still turn out at 6 and be a part of the day’s youth—the day’s spring. It offers such a sense of potential, renewal and promise, as well as beauty. I don’t know if I could ever have enough of that delicious sense of beginning. But at least I’m getting as much as I can. 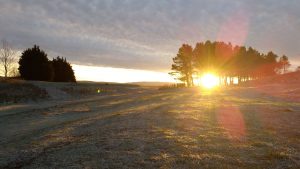 You can read the poem from which this post’s title comes here.

2 Comments on thing 44: ‘when I have fears that I may cease to be’: getting up early