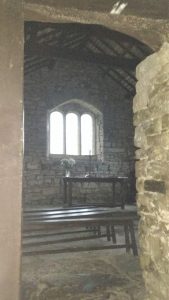 Bewildered, amongst bewildered sheep, I was blundering around a mud-skiddy fell in the steady, slanting, seeping rain. My legs, however, were having a whole different experience—of sea breeze and wide sky and blue air; of sand sliding away beneath my feet. It was a powerful muscle memory of walking in dunes on Balmedie beach when I was little: how tiring it is; how your feet slip away from you, slowly and sometimes swiftly, at unexpected angles; how hard it is to gain any ground. I felt 52 and 8 at the same time. Very odd.

This grey Sunday afternoon I’d finally managed to lever myself off the sofa, having decided on a small adventure: visiting the Chapel at Keld. Someone had mentioned it on the course about travelling I went on last May, and it’d been on my list of things to do since then. When I consulted the map I saw that Shap Abbey was nearby, and there was a footpath and set of small roads which would make a neatly triangular walk if I started there and walked across the fell to Keld. I had a plan. I had many layers. Good to go.

As I drove up the A6 over the Shap summit the cloud was sitting low on the hills and I needed my fog lights every now and then. Wind tugged gently at the car at the very top and the sodden fells were a study in ochres and russet. The many sheep looked to be deploying even more than the usual amount of stoicism required of livestock in Cumbria (I may have been projecting here). I zipped through Shap village and turned off down a side road, eventually bumping down a concreted track which canted and angled its way across a field. A flock of gulls was bright white and grey against the green-brown grass, and ewes scattered as I approached. One did that thing where it ran along the road ahead of me instead of veering off to the right or left; I was crawling along in first but I still felt guilty at causing this matron to trot. She was too great with child to be moving this fast. 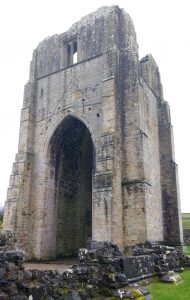 The car park was a small area of mud and puddles beside an apparently abandoned low wooden building. Bristling notices ushered the pedestrian away from the large bridge and towards a smaller one. The Lowther was high, brown, and swift-moving, and I skidded and slithered across the footbridge and turned left, going through a gate then following the track to the Abbey ruins ahead. As with all the paths round here at the moment, this one was blurred with mud, gloopy and slippery and punctuated with puddles whose depth could only be established empirically. A particularly large one at the kissing gate made getting in to the ruins quite difficult, but I squeezed through and stood looking up at the large, well-preserved west tower. It formed a grand entrance, and I stood between its walls for a long moment, gazing at the spread of low walls, columns and grassed areas which lay ahead and around the small site.

The signage (as I fear it would be called) was very well judged throughout,* finding that line between illuminating and overwhelming and allowing me to get a better-than-usual sense of what the Abbey and its buildings might have looked like. 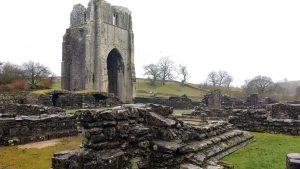 The Abbey’s nave lay ahead, with the presbytery and altar beyond and, behind that, the river; to the right were the Chapter house, dormitories and infirmary; also to the right but further back was the Garth, or cloistered area, now discernible only as a small square of grass bounded by low walls. I imagined brothers pacing, 800 years ago, the sound of water a constant soundtrack for their meditations.** As I wandered cautiously over rain-slippery stones, a crowd of jackdaws rose every now and then from the riverside trees, circling and tchacking and settling again in the bare branches. Sheep bleated from adjacent fields. Sharing this place only with nature and time, I felt quietened, calmed a little: not as if everything had been put away, neatly, inside me, but at least as if stuff had been shoved to one end of the mind’s table, leaving a small clear space in the middle.

As I’d learned from the map, this had been a Premonstratensian Abbey (that one’s for you, Meg), dating from around 1200 and home to an order of contemplatives who also served local communities as priests. They were known as the ‘white canons’ because of the colour of their habits (a tricky one to maintain in Cumbria, I thought). Because the Abbey was situated in this dip in the valley, right alongside the river, I had a sense of how remote and cut-off it might have felt: the very skyline was low and close, though you could see across the wider fells if you climbed the track off to the west. The Order’s website (a more recent construction!) describes them as “striv[ing] to live with the tensions that are associated with the relationship between contemplation and action”. Was that any easier then than now, I wondered, as I followed the footpath up onto the fell? 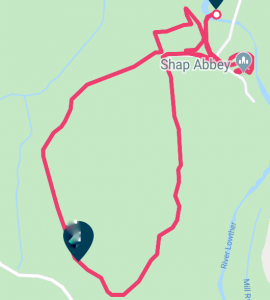 Or at least, I thought I was following the footpath. As you can see from my fitbit, I cast about like a dog trying to pick up a faded scent, starting and retracing and starting over again. I got quite a long way into (what I think was) the Abbey park field before conceding that I really had no idea where the path was or even, really, precisely where I was. The relationship between OS and actual terrain was opaque. The grass was sodden and criss-crossed with greener sections which looked like paths until you got to them and discovered that this was where the saturated ground ‘flowed with the water it could no longer absorb. There were large stretches of clumped fescue, tracts of mud and bog, and many indignant sheep who (I fancied) hadn’t seen a walker for some time (probably because you shouldn’t

be walking there) and lumbered heavily out of the way, protesting. My muscles may have been on the beach but I was soggy and disoriented as I plowtered my way around (one of those unimprovable Scottish words). I wasn’t disheartened, though: I didn’t go far enough to feel totally lost and when I eventually decided to go with Plan B and drive to Keld, I found my way back to the car easily enough. (An enormous ruined tower does tend to help with the micro-nav, when you’re heading back towards it.) 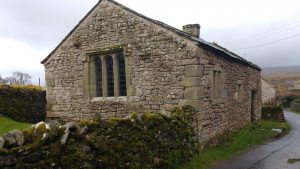 Some nifty passing-place action was required as I took the road to Keld and, given the current amount of mud at the road edge, this was mildly unnerving. It was worth it, though. I saw the Chapel at the roadside in the tiny hamlet: a low stone building, built round about the same time as the Abbey and, according to some schools, possibly a chantry for the Abbey.*** Parking further down the road, I walked back up towards the Chapel, stopping to collect the key from where it hung beside the door of the house opposite. There was something really refreshing about this arrangement: a reminder of a time where we were

treated as if we could be trusted to be sensible and decent. A notice on the door warned that the roof lime was dropping out in chunks,but the Health and Safety Police weren’t keeping me out. I turned the satisfyingly chunky key in the lock, and went in.

Immediately I had a sense of a place full of peace. The door opened into a tiny windowless room and from there a door on the left (either open or doorless, I can’t remember which) led into the small chapel space. It was furnished with wooden benches and a plain altar table, aged and woodwormy, on which stood a simple cross and some empty candlesticks. Flowers still recent enough to be colourful were in a vase, and there were a couple of etiolated potplants on 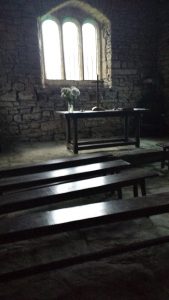 windowsills. The windows were full of the faint, fading light and beyond them was grass and the old, lichened drystone boundary walls of the tiny plot. I sank down on a bench and simply sat, taking it all in, my breath—like that of a small and not very frightening dragon—pluming and curling from my nostrils in the chill, damp air. The rain wasn’t strong enough to patter on the window panes but I listened to the wind buffeting and roaring outside and had a great sense of stillness, of calm in the middle of the storm. This was exactly what I needed.

I’m not sure how long I stayed, though it was definitely long enough to get really cold and become aware of how damp my coat was and how soggy my trouser legs. Admiring the lintel over the doorway in the partition wall, I turned for a last look before leaving, locking the door behind me and returning the key to its hook. I’m realising, over the course of my 50 adventures, that I have a bit of a thing for small, remote, ancient places of worship. And such places (and moments) of peace and respite feel particularly precious at the moment, when such hard things are going on for me and mine. So I tucked the experience carefully away in a corner of my heart and took it home. 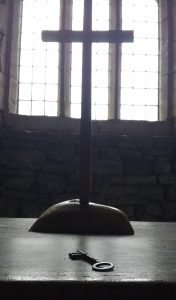 *The only odd note was a cast metal sign which forbade climbing on the walls “by order of the Ministry of Works” which seemed slightly sinister and a bit Orwell-ish. Is there still a Ministry of Works??

**You can read the poem from which this post’s title comes here.

***The author of the modest booklet available in the Chapel has found no evidence for this claim, however. The Chapel’s referred to in C16th documents and has been used as a house as well as a place of worship in its time. In 1917 Lord Lowther wanted to demolish it because it was “an obstruction to his carriages on the way to his shooting lodges” (!) but fortunately it belonged to the National Trust by then and they stood firm against Lowther’s claim that it was merely a barn.

4 Comments on thing 47: ‘immensity taps at your life’: Shap Abbey and Keld Chapel