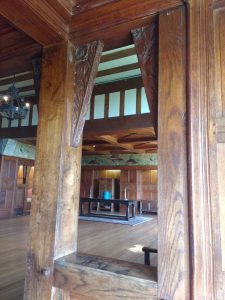 Of course, Keats didn’t live in the age of the halogen bulb. If he had, things might have been different.*

I was feeling the need to find somewhere lovely and just be there, with no demands, difficulties or despairs. Blackwell House is only a quarter of an hour away and I had a visitor coming for the weekend. Excellent. That would do the job nicely.

The perma-rain—fairly discouraging as far as getting onto the fells is concerned—was due to lift a bit on the Saturday afternoon, so Richard and I decided to walk somewhere near the House before repairing to Blackwell for tea and the inhalation of loveliness. The ground hereabouts is currently so saturated that many fields are uncrossable—lots of impromptu ponds and unexpected water-hazards—and cloud was so low over the fells that gaining height would simply take us into 360° visual sogginess too. So we scrutinised the map and found a little triangle that took in some low fields and a bit of lakeside-ness along the road; modest, but enough to vindicate the subsequent consumption of cake.

It was good to be out, however dreich the day. It wasn’t actually raining, and we could hear the water birds splashing and chuntering on a sheet of flood water in the field next to the road. Glimpses of watergleam could be seen through the naked limbs of trees at the field’s edge. A bit further along the road, in obedience to the map we turned off between two houses and had that uneasy feeling of being in someone’s garden—which, it turned out, we were. Hastily we slithered (not easy) our way to a lane, then found a fingerpost which pointed up the hill and bore the name of the place we wanted to go. Why, then, was there a large, terse sign about 100 yards up the track: “PRIVATE. NO ACCESS”? We stood for a few moments, torn between trusting OS and fear of getting into a fight with a farmer. Feebleness won. We trudged back to the road and along to find the Plan B fingerpost which would cut us right and down to the lake.

And blow me, when we reached it there was another such sign: “PRIVATE, NO VEHICULAR ACCESS, HAVE YOU WIPED YOUR FEET?” (or something like that). Still, we could see a third fingerpost pointing towards the lake, so we nipped along the metalled road then followed the curve of a muddy track through a wooded area and down to the lakeside. But, oh dear. I think I must have been in some kind of fantasy state when I suggested going there, imagining a sort of jigsaw-pretty scene of fells, wide water and vernal loveliness. Instead we found ourselves on a 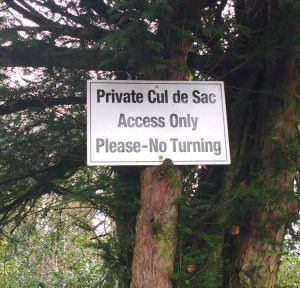 road loud with traffic and stinking with fumes. The ungenerous verges were muddy and litter-strewn, and instead of views of the lake or hills we could only see large houses crouched behind walls or high hedges, with the occasional fence-and-gate system so solid and discouraging it was tantamount to a stockade. I lost count of how many unfriendly signs we saw, all saying, in one form or another, “FUCK OFF, PEASANTS”. Look at this one. The houses in question were hundreds of yards away up thousands of pounds worth of drive, so what harm could it possibly do if people turned on their precious tarmac? I mean, really. What is that about? 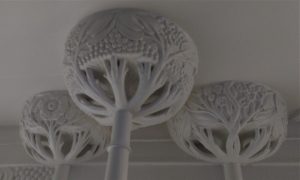 So what with one thing and another we were happy to make it back to the car, de-boot, and get ourselves seated in the teashop at Blackwell. It’s a pleasure to be there: art on the fresh green walls, beautiful, hand-wrought window fastenings, and curtains of thick, quietly luxurious arts-and-crafty material which echoes the motifs to be found throughout the house itself. Great soup and cake, too. A caff ticking both Morris’ boxes: useful and beautiful. Sigh. This was more like it.

Completed in 1901, Blackwell was built as a holiday home for the Manchester brewery owner, Sir Edward Holt. In its time it has been a school and an office space as well as a private home. Hugh Baillie Scott was the architect, and we can safely say he knew his onions. The first time I visited I went slowly round, mouth agape, letting it all flow over and through me, like some plankton-eating sea-creature finding itself in particularly nourishment-dense waters. In his 1902 book House For an Art Lover Baillie Scott wrote of how the furnishings ‘need not be elaborate or costly, but they shall at least be human—they shall speak of the hands and heart, not of machines’. Here in Blackwell you can 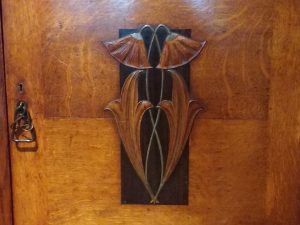 feel the heart and hands—the love, lavished on everything. This was soul food, no doubt about it. I didn’t begrudge the owners on Millionaires’ Row their fortresses by the lake, however lovely their situation; but oh, how I wanted Blackwell to be my house, particularly on that first visit. That such loveliness exists but I couldn’t inhabit it—well, it just didn’t seem fair. (I have since learned to cope with the envy by knowing that that the delightful Yellow Bedroom is, in some indefinable but unarguable way, mine.)

Light fittings and shelf supports, tucked-away cupboards and fireplaces, stained-glass roundels, door handles and window catches: care and thought have gone into everything from the tiniest detail up. Stone has been worked into shapes of unfussy beauty; quietly pleasing carvings add unobtrusive but important notes of detail; plaster is moulded into simple but stylish forms; and everywhere glass, metal, textile and wood offer both natural and stylised images of nature. The eye moves in delight from one place to another. It sounds like the cheesiest of slogans but of Blackwell it is actually true that there’s always something new to discover.

It all works at the macro level, too. I remember entering the Sagrada Familia in Barcelona and being speechless with surprise and wonder at the experience of stepping into the church and into the light. Here at Blackwell was the first time I had that same clear sense, in a domestic building, of space and mood being designed—created—in this way. There is an alternation of cosiness and spaciousness, intimacy and range, which seems to accommodate and 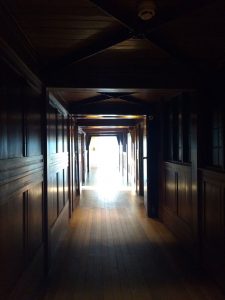 induce every pleasant emotion. In the Dining Room and Main Hall there are cunning inglenooks and alcoves round the fireplaces, while several rooms have large window seats with views out over fields to the lake and fells beyond. My equal-favourite-est thing (together with those window seats) is the way, when you first pull open the wide wooden internal door into the House proper, you find yourself at one end of a long, wood-panelled corridor, which is quite dark where you are but which invites you along its length to the doors into the White Room at the other end, where light is dazzling. From womblike darkness a glorious airy beautiful space blooms: the very fabric of the house takes you on this journey, brings you out into the breadth and brightness of life. It is so beautiful and joyous. 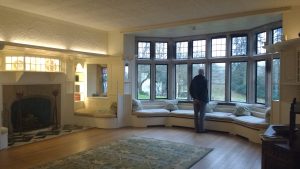 So you can imagine my shock when, with a confident expectation of drenching myself in this beauty of light and space, colour and texture, I pulled open the wooden door to find that some monster had installed glaring halogen bulbs at intervals along this corridor (and, indeed, in many places around the rest of the house). The corridor was flattened by light; made dull. Everywhere shadow and mood had been banished by the glare of unsympathetic white light. This time I was open-mouthed with horror. I wandered round the Dining Room and Main Hall, temporarily rendered unresponsive by dismay and rage. How dare They do this to my beautiful space?

I slumped in the window seat with my back to the nearest set of halogens, and looked out at the trees, sky and lake. We watched a black and white cat hunting in the long grass a couple of fields over. After a long while the sought-after sense of peace came over me. Every time I sit there I remember it’s a place where you can bear to think the kind of large and painful thoughts you only want to think with a long, beautiful view spread before you. I ruminated, 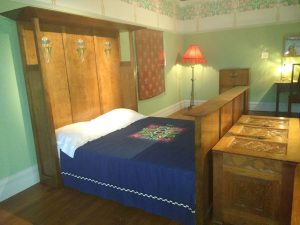 felt, cried a bit (not about the lightbulbs; or not just about them); and then we wandered, more calmly, upstairs to the Gallery—also a-glare—and the dressing room and my bedroom. I expressed myself with some strenuousness in the Visitors’ Book then drifted along to the Master Bedroom, where the specially-commissioned handmade bed now lay in a rude, spotlit glare. They didn’t ask me, I didn’t like it and I couldn’t do anything about it. There seems to be an awful lot of that about at the moment.

But, just as film stars can be badly served by their lighting directors and remain beautiful to their very bones, so Blackwell is larger and finer than whatever an insensitive curator or Visitor Experience Designer (or whatever the hell the relevant person is called) may do to it. It remains an example of exactly what Keats was banging on about: a thing of beauty, a joy forever. It makes a bower for me—recalls me to what binds me to the earth. Every time I go I remember that there’s a version of life, a value-set, I can inhabit more happily than what Forster might now call this world of ‘Instagram and anger’. What sweet refreshment.

But remember: if you go, in the Yellow Bedroom you can look but you can’t touch. It’s mine. 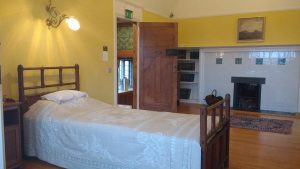 *You can read the poem from which the post’s title came here.