I doubt Leonardo’s going to hustle for the lead in this one. 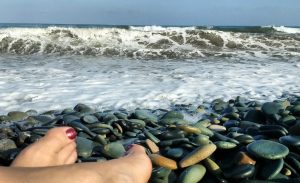 And it probably says something sadly unsurprising about the state of the film industry that I can’t even think of which female actor would have their agent on the blower to the producer. However, I’ve got to tell you: middle-aged woman on a beach felt absolutely bloody marvellous.

I’m in Cyprus at the moment: my mum has taken me on holiday, along with my sister and her husband, and a family friend. We’re in a gorgeous villa, all marble floors, high ceilings and mercifully-efficient aircon. 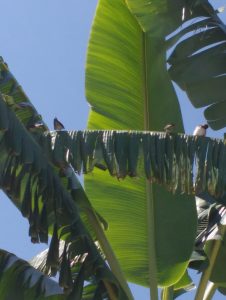 It has comfy beds, and such an array of bathrooms that you rarely have to pee in the same place twice in one day. There’s a large, open-plan living-area, and a kitchen so sleek and well-appointed that I feel I should be turning from the stove to film a piece to camera at the glossy central island. Lushly-fragrant flowerbeds send scents of rose and jasmine drifting round the pool where the swifts swoop and dip. In short, mum’s ruining us for any future holiday we’ll ever be able to afford! But one of the deepest pleasures of this place is the simple fact of its being genuinely (as opposed to brochure-ly) a minute’s walk from the beach. 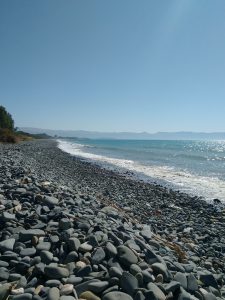 Part of a wide curve of shore which sweeps perhaps for 8 miles, this beach isn’t one of the golden-sanded, sunbed-lined breed. The website described is as “unspoiled”, and indeed, there’s not really enough of it to spoil: it’s a narrow shingly strip not 100 yards from the main road, with the odd tantalising glimpse of sand when the waves have a moment off from towing the stones to and fro. There’s an awful lot of litter―a loo seat, a child’s shoe (worrying?), a million yoghurt pots and take-out coffee lids, crumpled cans… all the usual sorts of things. But, oh! When I go down for my morning swim, I have the beach entirely to myself. 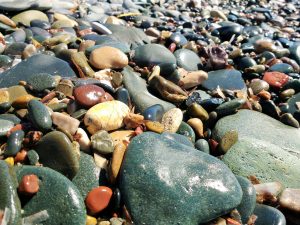 I sit on the already sun-warm shingle. I take a few moments to settle, looking at the different shapes and colours of the stones, and how they are graduated, from mostly-large (say, brick-sized) at the top, to smaller, to tiny, down at the waves’ edge. I enjoy noticing how, every morning, the beach is a different shape, depending on how the sea’s action has thrown and sculpted the stones. Yesterday the quite-lively surf had scalloped the shingle into a series of small curves: it looked for all the world like a lace edging, 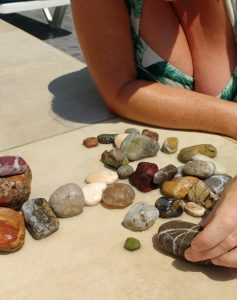 the entirely scum-free water bubbling and fizzing in a whiteness which dissolved into nothing as the wave retreated. Today the sea is calmer, and has made a more even distribution of stones, a gently-undulating border of grey, russet, ochre, black, green and white which the water awakens into a glistening brilliance. 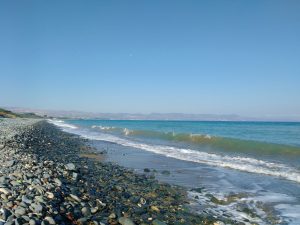 I close my eyes and notice, too, how the sound of the waves’ breaking doesn’t come in one “piece”, but moves gradually, rippling towards me. It starts maybe fifty yards to my left, where the crest of the surf curls over and breaks; and as the break rolls along the length of the unfurling water, the sound moves towards and past me, too. It’s a subdued crashing today, more subtle than the boom of yesterday; it’s followed by the incoming rush and fizz and rattle as small stones are pushed up the beach and then pulled down again.

The breeze pulls bits of hair from the get-it-out-of-the-way-for-swimming bun skewered on top of my head. There’s a luxury of heat on my back, where the sun hits; an awareness of the bumps of stones under my bum, 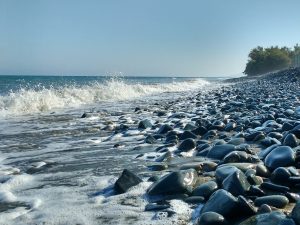 of my warmed hands resting on my knees, of the heat and unevenness of the shingle under the soles of my feet. And I reconnect with one of the deep joys of being this middle-aged woman on the beach: it’s really is not about how I look, but how I feel. That freedom is, perhaps, one of the things the afternoon knows, which the morning couldn’t even imagine.

Not that this bliss of unselfconsciousness is permanent, of course; nor is it easily won. For me, at least, it has involved―and continues to involve―a great deal of relinquishment and coming-to-terms: of accepting what I have never looked like, what I will never now look like again, and anticipation of what I am going to look like in the future.* There are scars, blemishes, stretch marks, spider-veins; there are rolls as well as curves, less hair in the desired places and invading forces of it colonising hitherto virgin territories. There’s all that, and more; but still, I have the great good fortune to have this body, which is fit enough to walk me here―to sit in the bliss of the golden-growing morning, to see the marvel of the myriad stones and drink in the sounds of air and water as they move. This is an everyday miracle, a riot of luck and delight. And all this before I have even got into the sea. 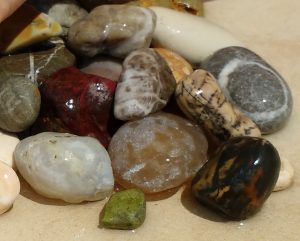 *For more on the shocks which come with the journey into midlife, see the non-fiction bookshelf where there will at some point be a review of Jane Shilling’s brilliantly-titled, sensitively-observed memoir of middle age: The Stranger in the Mirror.