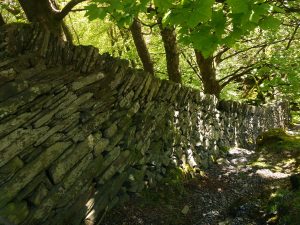 “This is a magnificent piece of walling which shows off the expertise of the men who built them. Note that the wall has horizontal courses, while the top stones slope with the hill and are built with the wall rather than simply sitting on top. There is a strong wall end above the gorge”. Well, who knew? She who hath eyes to see, and all that.

The wall thus celebrated features in a walk round Coniston and the Old Man, given in a booklet produced by the Cumbria Dry Stone Walling Association (from which that description is taken). My friend Jenny suggested the walk. Niche (forgive the pun) but potentially interesting, I’d thought. And so it proved to be.

We’d had to postpone the walk from a dauntingly bad-weathered January weekend. Now, five months later, it was a day for sunscreen and the casting of clouts. We made our way from Kendal to Coniston: always a slow drive, but particularly so today because the usual tourist traffic annoyances—which allowed us, or me anyway, the righteous, semi-enjoyable indignation of the local—were exacerbated by approximately 10,944 lycra-wrapped cyclists completing the Fred Whitton Challenge. It’s a long way to drive while looking at arses, however toned and comely they may be.

Eventually we made it to Coniston, though, to find the village loud with sunny-Sunday outside drinkers, sightseers, families, walkers, dogs. Strappy tops were out, t-shirts were off, and there was plentiful evidence of lobstering in previous days’ sun. Never one for being alongside others’ booze-pimped jollity, I was glad to leave the village centre and head towards the Ruskin Museum, round the back of which is an exhibition of various different walling types, techniques and features, and a delightful miniature village. 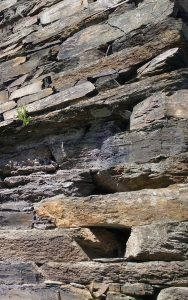 Via his booklet, Mr Wall-Walk-Describer offered us a lot of information, which I couldn’t immediately digest: I looked earnestly but without much comprehension at the things in front of me before deciding to try to acquire knowledge as we went along, rather than all in a lump. As we walked, Jenny was kind enough to read things aloud, so I didn’t have to faff about with reading glasses. I could simply have the luxury of listening and absorbing.

And the walk turned out to be a good instance of there being ‘nothing either good or bad, but thinking makes it so’. Only moments beyond the village edge we were walking through spring-splendid countryside, up a stony track through ludicrously bright-leafed wooded areas where peat-brown water splashed tunefully over stones or cascaded into clear-blue plunge pools. But Mr WWD was quietly insistent on the magnificence of the walls, and after a while, having borrowed his walling goggles, we found ourselves beginning to see what he saw, too. Look at these quoins, for instance—the stones at the wall-corners on the houses and barns. They’re enormous! How were they got up there in the days before machinery? And what about this stoop? 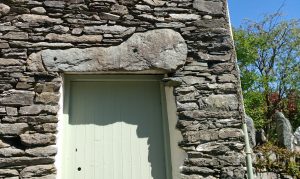 Here it’s a lintel, but you can see the holes which betray its original function and position (it would be upright at a wall-end, where the holes would receive ropes, or posts, which would then close the gap). We learned that the foundation stones form, well, the foundation; that the gaps between the face wall on either side are filled in with hearting, which is itself graduated from bigger at the bottom to smaller as you go up; and that the through stones help hold the wall together. These last, found in courses, 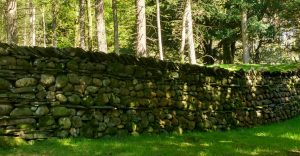 will often stick out; and the whole will be topped off with cams, or coping stones, which can be done in different styles. (I particularly liked—not least because of the easy identification—a style of cams called “cock and hen”: big ‘uns and littl’uns, alternating.) A particularly thick wall, built to absorb a large quantity of stone when a field is cleared, is known as a consumption wall. (Isn’t that great?) And walls can be punctuated with smoots: gaps, essentially, which allow livestock to pass through, but which can easily be blocked off when necessary.

Even rabbit smoots are made— which sounds charmingly thoughtful until you discover that, once the rabbit population has got used to using one, a snare will sometimes be laid on the far side… Doesn’t quite seem like Queensberry rules to me.

It was so quietly pleasing to start noticing all of this. Indeed, the whole thing reminded me of how satisfying it can be to learn something new: how, along with facts, you can acquire a new way of looking at the world, a new source of interest. Though I was delighted to get in some extra lamb-hunting (here, further north in the county, there were a lot of Herdwick lambs, 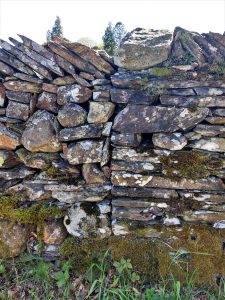 which were later, and therefore younger and bouncier, than the ones nearer Kendal); and though the lake was a striking colour as it reflected the clear blue sky; and though the fields, hedges and verges were a festival of May delights: still, I found myself enthusing not about the natural world but about walls. They had a story to tell—as here, where the absence of the usual overlapping of stones in adjacent layers betrays the end of one person’s land, the start of another. (You can just imagine the conversation: that’s Fred’s bloody land, is it? Well he can put put t’t wall up, then). I loved, too, seeing some instances of wallers’ wise decisions to work with what was already there. Accommodation, acceptance. The keys to so many things…. 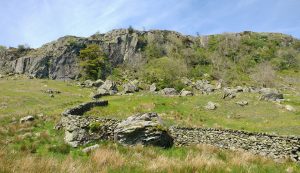 I’ve always loved landscapes where the dry stone walls suggest so many years of man’s relationship with the land. But in all the walks I’ve been on since thing 19, I’ve looked at the walls with a new, marginally more informed hum of appreciation. Only last weekend I was pleased to see a smoot being used. The sheep moved more quickly than I expected, so I ended up with a picture of lamb’s bottom; back to backsides, again. Still, it remains true: a little knowledge can sometimes be a wonderful thing. 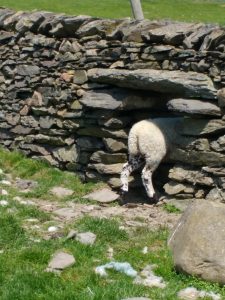 Very often things which don’t seem very important or interesting are absolutely crucial. This poem is nothing to do with walls, but it does celebrate that which is quietly important: read it here.