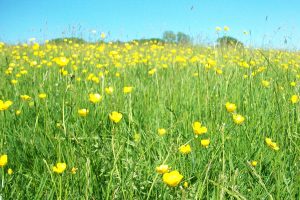 For weeks now, being in the Cumbrian countryside has been like walking through a 70s Flake ad, only with no innuendo and barely enough chocolate. The meadows are extraordinary this year. I’ve never seen so many buttercups, such clover and poppies, never mind the numberless others I can’t name; and I can’t remember seeing a farmer, one man, mowing a meadow (sorry) for hay, so early. But on this hot Bank Holiday Monday the freshly-cut fields were corduroy-striped with lines of fallen grass, and the air was rich with its damp, green, essence-of-summer smell. A perfect day for the first wild swim of the year.

I’m not one of those impressive creatures who swims when it’s very cold. I respect those swimmers’ hardiness, and know they’ll experience a profoundly invigorating and, no doubt, very healthful physical reaction to dunking themselves in such cold water. But it’s not for me. Besides, the very thought of putting on a wetsuit makes me feel claustrophobic: the idea of having to be shoe-horned into something that tight, something that I couldn’t easily escape from if I wanted to, induces a mild anticipatory panic. So, no. It’s swimsuit all the way, so that I can luxuriate in the feeling of wild water on sun- and effort- warmed skin. All the better, then, that we found ourselves with a decent pull up the fell to today’s tarn of choice, Gurnal Dubs.

I often find starting off a walk really difficult—something about the first bit of micro-navving can fox me—and so it proved today. Richard and I found ourselves in a farmyard populated by some surprised-looking hens, a few calves, and a very irritated dog. Both the yellow arrow and the OS map had pointed us in here to pick up the footpath, but we couldn’t spot the way out. A few weeks ago we’d started a walk from a Kentmere farm so lavishly appointed with yellow arrows that we reckoned the owner had bought some kind of bumper pack. Despite this, however, and although we’d seen where we needed to get to—about 3 metres away across the field—the farmer had created such a needlessly Byzantine sequence of pens, bends and chicanes with old gates, fencing, bedsteads, planks, corrugated iron and so on, that we couldn’t actually work out how to get there. It was like the Crystal Maze, with the arrows doing all the hectoring. Today’s farmer, by contrast, had obviously not popped in to the yellow-arrow-sticker sale. No clues here. We simply couldn’t work out where we were supposed to be going and eventually, fearful of trespass, gave up and went along the road. Soon enough were able to strike out on a bridleway so verdant and lovely, and with such gorgeous views across the flower-filled, shaggy-tree-d countryside, that it could have been used as an advert for rural England. Green And Pleasant™, guaranteed. 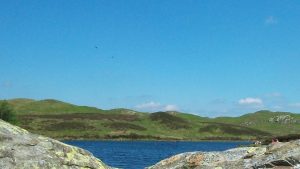 Then things got steep. We toiled and sweated up through fields where lambs, grown chunky and complacent, no longer skittered away to mummy but merely watched, chewing casual cud, as we passed. We had some judicious view-admiration breaks, enjoying home-made powerballs which didn’t look too good after an hour or so in a hot pack, but which had miraculous re-energising properties. Then there was a bit along an unshaded, dusty track—how often do we get those in Cumbria?—before we bore right at last onto the brightly-brackened fell, where we soon saw the inviting glint of water, steel blue and lovely under the cornflower sky.

First swim of the year is always an occasion of ecstasy for me, but this one really did feel unimprovable. I was hot enough to be longing for cool (hill-walking in a heavily-lycra-ed tankini in 27° is not comfortable). There were but a few other people, some of whom had brought lovely, un-bark-y dogs which were swimming about with endearing, doggy earnestness. There were a few trees in a painterly gathering at one point but, apart from that, a 360° view of grass, heather, bracken and the further rise of fell behind the tarn. Like an exquisitely-judged mural, the sky was decorated with small puffs of cloud so white and fluffy they could have auditioned for the opening credits of The Simpsons. And there were places to get in where there were no reeds, and no mysterious sliminess waiting on the bottom (though my trusty aqua shoes always help with that anyway). As I waded in, the larks were strafing me with song, and swallows swooped and called all around. A multitude of tiddlers swarmed over to see what these strange white things were, and were soon giving little exploratory nibbles to my flesh. 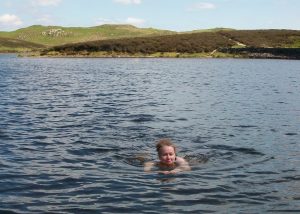 In my experience, wild water falls into two broad categories. There’s always a slight shock of cold; but after that your legs either—metaphorically speaking—shrug and go, oh, all right, that’s going to be ok then, and you forget about them, or shout FFFFUUUCCCCKKKK let’s get the hell out of here, and you want to move, pronto. Today Gurnal Dubs fell into the former category; and though I took my usual time getting in, and though after the point-of-no-return plunge there was the usual flurry of very fast swimming for a few strokes until I warmed up, the water was absolutely delicious. I swam slowly right to the other end of the tarn, flipping over occasionally onto my back, the better to marvel at the glory of the world spread about me. There’s something about the water-surface-level view of light sparking on water which is unutterably lovely, and quite different from how it looks from the side. And being in wild water somehow allows you to have a sense of your own blood flowing quick and strangely hot-cool round your body: you feel the physical you-ness of you, your incarnateness, in a thrilling and distinctive way. 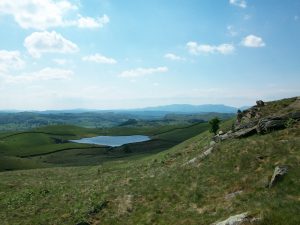 And then it was time for lunch. We feasted in a state of shared, wordless pleasure, and it was hot enough for me to air-dry in the sun while we ate. Richard dangled his feet in the water for a bit, and then we packed up and walked on: firstly to Potter Tarn, just over another bump of fell, and then all the way down to the riverside, following a stream as it fell. We passed another pool where something cross-shaped and metal was visible, proud of the water, like some kind of rusty Excalibur; and everywhere the hawthorns were glorious, each one a collection of ports de bras, the white, blossom-clotted limbs fragrant and heavy in their Maytime fullness. We hit the river Kent at the point where the footbridge, washed away during storm Desmond, still hadn’t been replaced, and as we were so hot, and the water so sparklingly lovely, went in for a paddle. 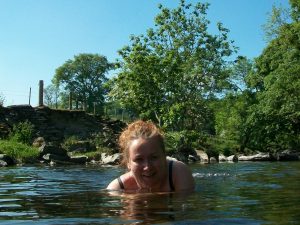 Well, in my case I was determined to swim again, not just paddle, but as there was less than a foot of water at the deepest point I was really just lying on the riverbed, clawing my way along the stones like something in the process of evolution. “I see you’re doing the front crawl,” Richard said.

I splashed about happily, aware of Richard having his own experience, but needing nothing from him, and knowing nothing was required of me, either. I stood, hands on hips, sighing with sheer pleasure, and my eyes filled with joyful tears. And suddenly I had a realisation about what being in wild water does for me. It gets me out of my own way. I disappear into what I’m doing—am no longer self-conscious, but as utterly and contentedly absorbed as I was when I was six, chattering and paddling with my beloved sister, engaged in some shared water-project like building a dam or fishing—you know, with one of those hopelessly floppy, triangular nets which has a wire round the top which tucks into the end of a bamboo stick? In other words, wild water lifts me right out of time. I wasn’t a middle-aged woman any more, merely a creature lost in enjoyment of myself, of companionship, of the world.

As Wordsworth (nearly) says: ‘bliss it was in that afternoon to be alive’. 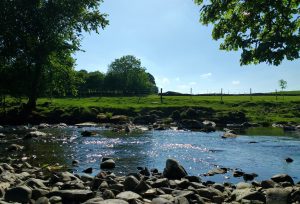 *For more on the sheer amazing treasure of being alive and experiencing on this earth, see ‘The Salutation’, here.