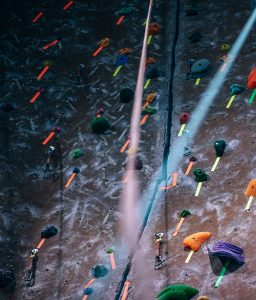 When I heard the sponsored abseil was on, I went into a kind of ingrowing hysteria (if there can be such a thing): a sort of intermittent internal waaaaaaaaaaaaaa! which came on whenever I thought about it. Such was my panic that I was incapable of thought, and it took my friend Kate’s suggestion that I might perhaps have some practice first to get my brain re-engaged. I contacted Andy—husband of my friend Ann: she of the fifty roses cake—who runs Ascents of Adventure, an outdoors climbing, walking, cycling and goodness knows what else business. Perhaps he was the man for the job? We negotiated. How many bottles of wine were commensurate payment for getting me through this? (Answer: more than the world contains; but he was generous.) And so here I was, shakily handing over a chinking bag and watching with a sort of out-of-body disbelief as Andy loaded up a rucksack with various hanks of rope—skeins? lengths? no idea—and clinking metal whatdoyoucallems, and webby, strappy things like giant nappies in outline. Shit (how apposite). I mean, shit. I was really doing this.

Andy has a sense of humour so dry you could dehydrate supplies for a lunar expedition on it. But he also has a reassuringly matter-of-fact attitude, and a combo of great skill, patience and an unfussy kindness, all of which lent (and I use that word advisedly) me confidence that I might be able to do this. So uptight was I that I couldn’t deal with buckles and clips and straps, so Andy lashed me into the harness—there’s another sentence I never thought I’d be writing—clipped me onto the rope, and started me off on the flat, just so I could get the experience of leaning into the rope and feeling it take my weight. We then progressed to me being lowered some ghastly distance—about 3 feet—before graduating to actual abseiling. I looked at the wall, then at Andy, in a sort of brightly expectant way, before realising that in order to abseil down the wall I’d first have to climb up it, there not being a lift or stairs or anything handy like that. Shit again. Another moment of utter surrealness as I stepped up to the wall, got my hands on the first holds, and started climbing. 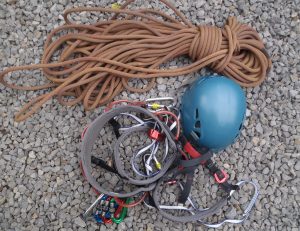 And I did it! It’s hard to own the sense of triumph I felt, because I’m aware that children of climb-y parents are clambering fearlessly around on such a wall before they’re school age, and so I feel a bit uncool feeling so chuffed with myself about it. But I was; and besides, cool is rarely a word that’s applied to me. At the top, I hauled myself over the edge, got to my feet, and was horribly aware of that lemming-like vertigo thing of feeling drawn back over it. Moving stiff-limbed with terror, I managed to step over the rope when Andy instructed me to do so, then stood passively as carabiners were clipped into place and screwed shut. And then, this was it. This was the moment. This was when I had to walk backwards to the edge and lean out into nothingness. It was do it, or go home.

I actually whimpered. Truly, properly whimpered. I just looked up the definition of whimper in the Cambridge dictionary—”make a series of low, feeble sounds expressive of fear, pain, or unhappiness”—and that really is exactly what I did. As I got my toes on the edge and my heels were hanging into space, the whimpering changed to fuck fuck fuck fuck fuck fuck fuck, as though I were some kind of demon chicken with a particularly verbal form of Tourette’s. But Andy was the quintessence of calm and quiet, unflowery encouragement, and somehow I manged to lean back, and found myself over the edge, more or less perpendicular, feet planted against the wall, and held by this miracle of rope and metal and borrowed self-belief. I began to inch my way down the wall. I could feel the harness digging in to my legs and waist, and my breath at once ragged and shallow in my chest. I felt silly, I felt incompetent, I felt nothing, I felt everything. When—about 4 hours later—I got my feet back on the ground, tears sprang immediately to my eyes (as they are doing now, as I remember it). I felt overcome with surprise, relief, happiness and pride. I didn’t feel able to let Andy see how emotional I was about having managed to get down the drop of maybe 12 feet; but from the top he looked down and said ‘You can abseil’. In the way that happens when you’ve felt broken open with fear or pain, I was flooded with gratitude.* I unclipped myself, chose a new set of handholds, and climbed back up again for another go…

We then fast-forward a few weeks, to the Monday before the Sunday when the abseil was scheduled to happen. Although I now felt frightened in a more informed way than I had before, I still wanted another practice, and Andy reckoned it would be useful to experience abseiling out in the open air, without the comfort of walls and ceiling close about me. I picked him up after I’d finished seeing the day’s clients, and we set off, winding our way through the beauty of the June Langdales till we got to Cathedral Quarry. There was a walk to get there from the road, and a wee bit of scrambling to get to the top of the smaller of the drops (the Quarry has the longest one in the Lakes); and then the now slightly-familiar routine of getting harnessed and clipped, putting on a helmet. I had the same semi-surprised sensation of Oh. Ok. Now I’ve just got to do it; and there was still a fair amount of swearing (or perhaps swayering is a better term, as there was certainly an element of invoking any available help). This definitely felt different from the climbing wall: the uneven, slightly stepped edge—as opposed to a clean corner—and the slipperiness of rock under my trainers, and the way that the rope hung over a bulge in the rock, so that at the bottom I couldn’t actually get my feet in contact with the rocks and was just dangling, bewildered, in space. Just as I went over this first time, Andy asked ‘Are you smiling?’. I burst into laughter at the sheer ridiculousness of the idea, and the tension erupted from me in a glorious bellow of out-in-the-open-at-last hysteria. After a few more goes, I said, ‘I’m going to be able to do this’.  ‘Yes, of course you are. You can abseil’ he replied. With that, we packed up, and went home.

‘A ship in harbour is safe, but that is not what ships are built for’, wrote William Thayer Shedd. Yes, yes, Mr Clever-Clogs Shedd. But we’re now at Embarcation Minus 6 … 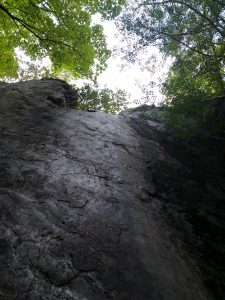 *For more on how much kindness matters when we are broken open, have a look here.