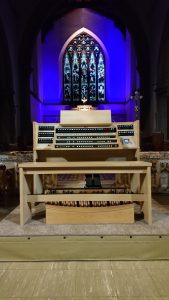 Not the first thing I thought of, or even the fifteenth, when I asked Richard what he’d like to do on his birthday. Still, it was his birthday, so it was up to him. Besides, I thought, trying to open my mind just a teeny crack, it might be interesting. I didn’t actually know what a theatre organ was, really, and had I made the connection between those words and ‘Mighty Wurlitzer’ I might have got my mind ajar more quickly. As it was, I was thinking about Sale of the Century (“And tonight’s prizes include a gent’s and lady’s watch set worth £120”) and the quavering, quasi-majestic sounds with which that seventies Saturday night treat was garnished. But, as I said, Richard’s birthday, Richard’s call. I made it clear, though, that pre-concert drinks were in order.

At the appointed hour we pitched up at Christ Church in West Didsbury, where Richard’s friend and fellow organist, also called Richard, was giving the recital. (We’ll call him R2, for clarity.) Christ Church is a large, late-Victorian building. It has chairs not pews, some fine stained glass, columns and arches, and quite a lot of twiddly ornamental stuff in marble and other stone. When we came in I noticed some life-size clear Perspex figures on some of the seats, and asked a parishioner what they were. ‘They’re our transparent tommies,’ she said. (I’d never heard of them, but it turns out I’m about 2 years out of date. You can see a short film featuring them here, and some stills elsewhere on that site, including here.) Each tommy’s chair had a laminated card with his life-story on it. There was something quietly affecting about seeing these figures—there but not there, at once hard to see and unmissable—dotted about the dimly-lit church on this cool, dark, autumn evening.

Though the body of the kirk had subdued lighting, there was purply-blue lighting flooding the altar. This contrast helped create an appropriately dramatic setting for the theatre organ, which was centre stage on its own little dias in front of the communion rail. I’d been expecting something grand, with multiple tiered ranks of stop tabs ranged in a 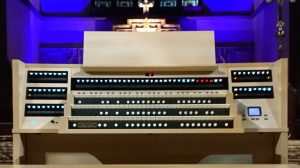 horseshoe-shape bank around and above the manuals (keyboards), all shiny plastic and OTT retro glamour in classic Wurlitzer style. The Viscount/Hauptwerk didn’t look anything like that (and nor, obviously, was it going to rise up through the floor, which I hadn’t really expected, but still had wished for). Instead, it was a trim, understated affair in light-coloured wood, with three neat manuals with buttons underneath, and some small banks of lights and switches above the manuals and to each side. There was also a pedalboard in the usual place, behind which was something that looked remarkably like a giant version of the foot-pedal on a sewing machine but was in fact a volume control used to make the sound more expressive. As I took it all in, R2 bustled on stage, slid himself onto the bench, and set to it.

And immediately my Sale of the Century fears were stilled. This—and let’s just get this said right now and get it over with—this was a man in full command of his organ. In The Catcher in the Rye Holden Caulfield listens to the piano player in a bar, saying how he ‘[isn’t] too sure what the name of the song was that [Ernie] was playing… but whatever it was, he was really stinking it up. He was putting in all these dumb, show-offy ripples in the high notes, and a lot of other very tricky stuff that gives me a pain in the ass’. I wasn’t too sure what the names of tonight’s songs were (though a lot were vaguely familiar) but although there was indeed lot of ‘very tricky stuff’ going here, nothing was being “stunk up”. It was, quite simply, extremely enjoyable and entertaining to listen to. He even played some Tower Ballroom type stuff for those in the audience who had sacrificed watching the first Strictly of the season. 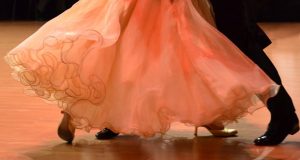 I noticed someone in the front row staring intently, head nodding in time, quite mesmerised by Richard 2’s fingers capering up and down and between manuals, flicking switches, pressing buttons, making an astonishing variety of sounds emit from this simple-to-look-at wooden box. (Theatre organs were originally designed to provide music and sound effects for silent films, so have a large vocabulary of noises.) And it wasn’t just finger-work, either. There was a lot of nifty stuff going on with the left leg and foot, too—the right being reserved for operating the sewing-machine pedal—and I wondered if he had one giant left quad muscle from all that nimble nipping about. (I’d try to sneak a look at the interval.) In the row behind us, meanwhile, a row of elderly ladies added their own humming, crooning and commentary to the performance, which was quietly delightful. I wouldn’t have been happy to have Bach thus glossed, but these medleys of showtunes, great American songbook stuff, Al Jolson numbers and so on were all enhanced by the women’s singing-along, gasps of recognition and shared, muttered reminiscences. It was moving and beautiful to hear how the music was transporting them, wakening memories which they could enjoy all over again, and share. There was something tender and lovely about it—the very definition of the warm glow of nostalgia.

During the second half I had one of those moments of sudden perspective shift—you know, when it’s like seeing yourself and your situation from above, as though you are scrolling out, up and up and away from it (as on Google satellite) so that you have a sudden sense of how small you are in the world’s largeness, how arbitrary everything is; how many ways have led on to ways to get you to this particular moment, and place, with this particular group of people; how improbable it all is, and peculiar at times, and beautiful. This was quite different from the Total Perspective Vortex vertigo with which Zaphod Beeblebrox was threatened on Frogstar B. It was a quiet treasure to feel I had a place in the world, one minute creature tucked in safely amongst all the others, and sharing this moment with some of them.

I felt grateful for being invited to get past my own prejudices, and aware of what one man’s niche interest, as well as his skill, had given a church full of people. Enthusiast is a word sometimes used to imply a judgement more blatantly stated in terms like nerds, geeks, anoraks. But enthusiasts preserve stuff. They share it, they pass it on. Their passion and delight are infectious. So, as a bookbinding nerd—I own, I think, 9 kinds of glue, each with its own specific purpose which I’ll happily tell you about, should you wish to know—I salute R2, a theatre-organ enthusiast. Thank you for sharing the unique you-ness of you.

Oh, and … can I have a closer look at your left thigh? 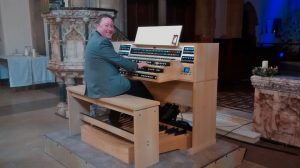 For more on music and memory, have a look here.

I wonder: can anyone recommend a poem about being eccentric/having a niche interest? I had a really good look, but I couldn’t find think of or find one which expressed appreciation of the nerd. Would really appreciate any ideas you have. Thanks!

6 Comments on thing 26: ‘back down the vista of years’: a theatre-organ recital