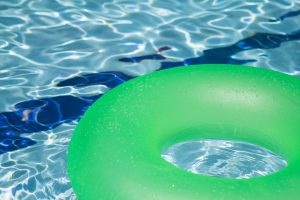 … Only this was the whirligig of space, not time. And boy, he must have been holding a serious grudge against me. His revenges were a surprise. And they went on a really long time.

I was bidden to Blackpool, accompanying Eleanor (goddaughter) and her friend, plus Jane and James—the abseil crew, minus Izzy—on a birthday trip to the water park. I’d been to one with Lem and Susie on the Ancient Mariner trip to Corfu, and again more recently, and had loved it both times. Water, sunshine, what film censors would probably call “mild peril”, and people I loved, to play with: what’s not to like? On the first visit I surprised the locker attendant when my rudimentary Greek let me down and, mixing up kali mera and calamari, I sang out “Squid!” to him in cheery, confident greeting. Never known to be cool… 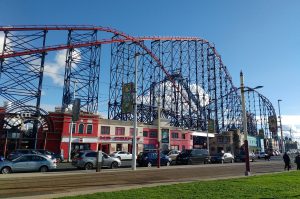 I guess it’s been a while since I’ve been in something as purpose-built tourist attraction-y as the Sandcastle Water Park, and it was a bit of a shock to the system. Three hours ago I’d been in the warm, shared silence of Meeting. Now I was in amongst snack bars, info areas, shops, slot machine bits, and loud pumping music. The décor was a bewildering mash-up of jungle, Aztec, rainforest, waterfall, bamboo, tropical paradise, savannah animals, pirate ship and who knows what else. I could feel my eyes getting bigger and bigger, trying to take it all in.

We got changed. I lashed on my Hyperzone Access Pass (!), and we walked through into the watery bit itself, where we started off in the wave pool. It wasn’t currently waving, so presently we sloshed our way over to the Ushi Gushi River Creek, a small area of swirling water where a current moved you at a moderate speed in a fairly wide ellipse around a central bit adorned with “rocks”, trees and so on. This was lovely! You could swirl just as you were, or inside one of the flotation devices—loops, maybe 3 foot in diameter, strung with alternating large and small fat discs of float-y stuff in bright candy colours, which reminded me irresistibly of those edible necklaces you used to get in the 70s—you know, the ones where the elastic allowed you to gnaw away on the sweets while you were wearing it, so that as you Ermintruded your way round the necklace you ended up with the sticky, slobbery elastic drooping damply round your neck? Mmmm, nowt quite like that any more…

Anyway, back at the Creek, you passed under a section where buckets, filled from above, intermittently tipped their contents onto your head. At other points water Gushing out of vents at the side could catch you unawares if you were being swept along backwards; but this was low-key and delightful and encouraging. So we graduated to the Thunderfall water slides, which also were great fun: I lay down in a sort of coffin-ready position and was whirled around at speed before being extruded into a landing pool at the bottom. By this time I was grinning with glee and ready for greater challenges. Time for the Hyperzone! Eleanor led the way. 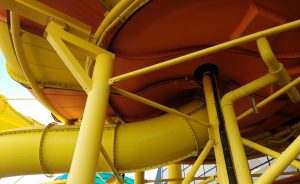 We queued for the Aztec Falls, Eleanor advising that it was better in a double donut because you went faster. Issued with said donuts, we “climb[ed] to the top of the Aztec Falls temple and… prepare[d] to drop in complete darkness into the whirling chasm of the Aztec Bowl”. ‘The trick is not to go down the drain backwards,’ bellowed James, as we swirled and gushed our way through the darkness of the tube before erupting into the black-but-lit bit where you—well, circle the drain; which drain we circled and went down. Backwards. It was exhilarating, though, and as we splashed into the landing pool and I struggled out of the donut, ‘More, more!’ I cried. Eleanor recommended the mats as being more exciting and faster still so, before I could think about it, I was grabbing a mat and following James back up the Aztec Tower stairs to the entrance to Montazooma.

Now, the Montazooma entrance was just beside that of the Aztec Falls and I’d vaguely assumed that this tube—in some way which I now realise doesn’t make sense—would follow the same route as the AF. Of course it didn’t. “This slide really does put the ZOOM in Montazooma! Hurtle head first through hairpin bends and 360 degree helixes at fantastic speeds on a thrilling, white knuckle water adventure!” Oh man should I have read the description first. The combination of small tube, flat-on-my-tummy head-firstness, darkness (and hence lack of visual information to help my vestibular tubes) 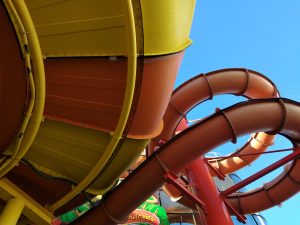 and those really tight, fast helixes were a recipe for serious, serious motion sickness. The sensations of going so far up the sides of the tube as you Zoomed were indeed thrilling and exhilarating—closest I’m ever going to get to the luge—but I really couldn’t enjoy it because I so instantly felt so ill. I mean, like, so ill. Nooooo!

Unable to accept the disappointment, after only a very short time-out I proceeded with James to the Masterblaster, ‘The World’s longest indoor rollercoaster waterslide!… [which uses] water injection technology [to propel] raft riders at high speeds up steep inclines and down big dips”. I think this would have been great fun if I hadn’t already been suffering the whirligig’s revenge but, as it was, the damage was done. I was profoundly, irredeemably queasy. (And besides, the water injection technology was threatening to take down my tankini pants.) So I staggered back to the Creek and tried to get myself together. I sat, reeling, in the shallows, watching a parent push a baby in an all-body flotation unit. Its mouth went square with distress and its wails got louder. I could relate. Suddenly I realised I had to get out of there, away from the huge and echoey noise, the booming music, the heat and crowds and busyness. Otherwise I wasn’t sure quite what might happen.

I’m rarely actually physically sick from motion sickness these days (as a child I would be issued with a roll of freezer bags to see me through a long car journey) and it usually passes once I stop the motion which set it off. But this just didn’t get better. I lay on a plastic imitation log bench in the foyer and prayed for continence, at least. When everyone else emerged, flushed with fun and exertion, I got to my feet and went outside, clutching Jane for support, and doing a modified version of the cautious I’ve wet my pants walk I use for stabilisation on icy pavements. Fresh air didn’t help; and the usual kill-or-cure, food, didn’t do either of those things. I didn’t want to poop the party (in any sense) but I longed for a Tardis or a teleporter to whisk me straight to bed.

James did the best possible job of whisking in the circumstances, though the long stop-start up the Prom and through the Illuminations might have been specifically calculated to exacerbate the situation, and the moving lights themselves made me feel more sick. However, I managed to take a mild, if bewildered, interest. Anatomically improbable illuminated pictures of showgirls and show mermaids, whose tails were the least unconvincing bits of their physiques; astronauts, Cheryl whatever-her-name-is-now, John Bishop and the Star Trek cast. Pirates, flashing hieroglyphs and plastic model elephants; pumpkin-shaped light-bedecked horse-drawn carriages and trams got up to look like ships. It all seemed very odd, in my current state at least. But over it all, the simple splendour of the Tower rose, its lines picked out in shifting stripes of light.

Blackpool is conflated, in my mind, with Morecambe, and memories of trips there on holiday when I was little. I remember how I would clutch the warm softness of my small red leather zippered purse; how it bulged with the pennies I saved for the slot machines and penny falls. This, today, all seemed like louder, unsubtler pleasure; but then I wasn’t in a state to appreciate anything much, let alone respond to such garish glamour. I’d definitely like to give Blackpool another go some time (NEVER the Montazooma); and I was glad to have shared this thing with my friends. But not as glad as I was to get home and collapse into the merciful warm stay-still-ness of my own comfy bed. 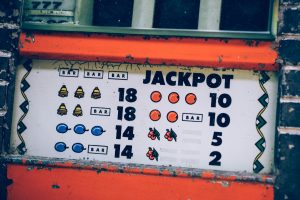 For more on the seaside of childhood memories, have a look here.

2 Comments on thing 27: ‘and thus the whirligig… brings in his own revenges’: a water park