A friend at Cambridge once described me as the only person she knew who would use the word adjunct in a normal sentence.

The same friend noted, one time we went cycling, that I somehow managed to maintain pretty much the same speed whether I was going uphill or down. I’d love to believe this was because I could power up hills with steel-thighed speed, but really I know it was about being frightened going downhill—fear of leaning into the bends; too catastrophic and vivid an imagination—and therefore using the brakes a lot. Freewheeling felt scary so, like a village policeman, I proceeded steadily and cautiously up hill and down dale.

It’s tempting to let this assume metaphorical dimensions, and if that one gets off the leash I can get quite sad about the anxiety it reflects, so I shall leave it there. But in terms of actual cycling, I haven’t done any for such a long time—I’m hoping to reschedule a postponed Thing from last year—that I’ve no idea what my current style might be. So I was curious as to how I would find thing 39.

Susie has long had a desire to go Segwaying. When she’s enthusiastic about something there is an energy about her which is entirely irresistible: if she truly believed it would be useful she could sell a bald man a hairbrush. But even if she hadn’t had that superpower, I just wanted us to do something fun together so, once we’d identified a weekend she could come and stay, I was on the blower to Lakeland Segway. Cartmel Races, here we come.

We arrived early and parked at the racecourse. I had no change for the ticket machine so Susie went to get some at a sweetshop, being obliged to buy some treacle toffee in order to do so. I was wary of it, but it was rich and tasty, with just the right degree of chewiness to let you know you were engaging with proper toffee without causing you to worry about the fate of your fillings. Strolling around, eating and wondering, we spied the Segways on a grassy patch in the corner. The beasts were dormant. We approached for a look. 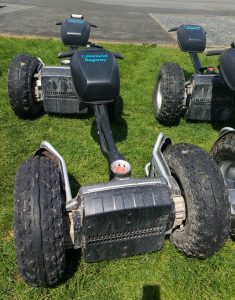 In case you don’t know, a Segway is a sort of small motorised platform on wheels, which has an upright stalk thingie which you use to steer it with. There are other controls on the stalk’s panel—you can be in “turtle” mode while you’re getting the hang of it, which limits your speed, and graduate to standard mode once you’re a bit more confident—but today these controls were being handled by Lilli and Josh, the young, friendly, skilled and very lovely leaders of our introductory session, so all we had to worry about was the steering and the [limited] speed. The speed itself, and direction of movement, you control by where your weight is: the further forward you lean and bring your weight, the faster you’ll go, forwards; lean back, and you’ll slow, and eventually go backwards. For the experienced Segwayer there are all sorts of subtleties about how you can use your weight and the flex in your knees to steer, too (as is the case, I gather, in snowboarding); but there was already plenty for me to get my body round without worrying about such nuances.

As with a frisky colt, you have to be brisk and confident about your mount and dismount, making sure you step far enough back when you get off it not to have the Segway roll or topple backwards towards you. Grasping the handlebars, I stepped as un-gingerly as I could onto the footplate. The beast stirred beneath me, responsive to my every wobble. I got used to this surprisingly quickly, though, and was soon able to make intentional movements. The handlebars felt very counter-intuitive, because you don’t turn the whole unit, as with a bike: the stalk and handlebars don’t rotate, but rather rock from side to side. More like a ship’s wheel than a bike.

Various steering practice things were laid out, starting with a wide weave between markers laid out in a circle, and ending up with following the fairly tight curve of a rope which had been draped in sinuous curves on the grass. I could feel the old cycling caution at first but was chuffed to find that I was soon able to negotiate tighter curves and dare to move at a speed where I probably wouldn’t be overtaken by an actual turtle. With what spare attention I had I could see Susie moving pretty deftly round the obstacles too, and imagined she probably had the same look of intense, tongue-poking-out-of-the-corner-of-the-mouth concentration as I was wearing.

Soon we were all ready to go off the grass and onto the tracks which would take us round the edge of, and then away from, the racecourse. All the other group members were either more experienced or less uptight than we were, so Susie and I elected to go at the back. A brief lesson on Segway etiquette—mostly common sense, with a side of “don’t be a prat”—and then we trundled across the carpark, through a gate, and along a rough unmetalled track which took us past groups of campers, stalls and other things (I think there was some kind of carnie or race gathering on). I could have done without an audience and felt a bit self-conscious: not because I was Doing It Wrong, but rather because Segwaying feels like quite a silly and pointless thing to do. I imagined onlookers thinking what a load of idiots we were. 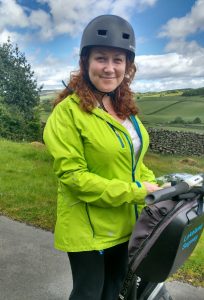 We got away from the racecourse and onto some tracks through the woods. Walking every day as I do, I’m used to seeing my surroundings at a pace where I can stop to appreciate a dripping beech leaf, the magenta prod of an orchid, the deep purple tangle of a vetch; and so it was quite odd having to concentrate on the how of the moving rather than the what of what I was moving through. It was also really odd to be moving around outside while getting absolutely no exercise at all. Nonetheless, I found myself relaxing and getting into it. I leaned further and further forward, urging my steed on, so that in the end I was in the pose I’d seen in photos of Segwaying —slightly superhero-ish, canted forward in a super-dynamic straight line—and had found really rather ridiculous.

And here’s the thing: it is ridiculous. But it is also ridiculously good fun. And it was lovely to lose the self-consciousness: to stop worrying about how this looked from the outside and simply enjoy what it felt like from the inside. I was giggling from sheer pleasure, delighting in Susie’s delight but also loving the deliciously, pleasurably silly whizzing effortlessly around the place. Just because we could. 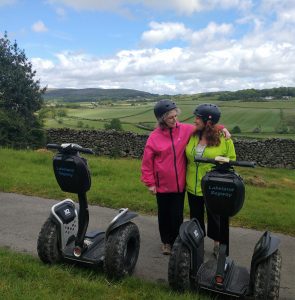 At the midpoint of the tour we were loosed onto a long straight strip of metalled track (private: Segways are illegal on the public highway) where we could go as fast as our de-turtled Segways would take us. Wheeeeeeeeeeeeeeeeeeeeeee! The wind would have been rushing through my hair if I hadn’t had a helmet on. It was brilliant. On the homeward run Josh and Lilli told us about the Advanced tour where we could have the chance to negotiate the Hill of Death. Bring it on we said. But not today.

We repaired to a cafe where Richard met us and we all had tea and cake. Susie and I both chose the vanilla slice and, though I can’t speak for her, I must confess that my inner child was still in charge and that my choice, therefore, was all about size: max cake for the money. I’m not exaggerating when I say it was 6 by 4 by 2 ½ inches in size, with a lusciously sticky thick layer of white icing on top and a daffodil yellow stratum of custard in highly satisfactory ratio—say, 6:1—in relation to the pastry. Susie ate half of hers and pointed out that what remained would be generous for a normal cake. I ate rather more, and soon afterwards found myself in the Vale of Regret—what Isobel, my abseiling partner, once referred to as food coma. What with one thing and another this was not a day for looking too closely at my fitbit stats but simply a playday to be treasured. Silly and fun and precious, shared with people I love. The very stuff of life.

So, Alison… I might be ready for that cycle now. 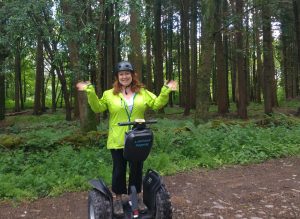