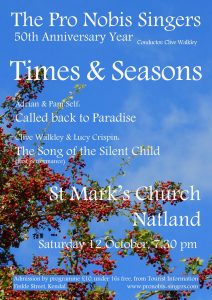 “In a time then and now/In a place far and near/In a world of which old stories tell/A land cradled in light―/Sun by day, moon by night―/Is held safe under summer’s sweet spell”. This is Summerland, where The Song of the Silent Child is set. The eponymous Silent Child is despised in this land of perpetual happiness, and it isn’t until she meets Old Mother Love, the Crone/wise woman who is dying, that the Child learns who she is: “’You go by many names, my child./Men call you Sadness, Sorrow, Grief./They fear you for the pain you bear,/Not seeing that you bring relief.’” Welcomed, accepted, and acknowledged as the child of love, Sorrow realises she has a place in the world. When storms come to Summerland she goes to the people who’ve so neglected her and, pouring out the painful, healing music of her song, brings them to a sense of acceptance and peace.

It doesn’t take a genius to penetrate the plot of The Song of the Silent Child, but I wanted it to have this naïve, fairy- or folk- tale feel because these apparently simple stories almost always have deeper layers of meaning. How many of us, for instance, sat around growing our golden hair before realising we didn’t need anyone climbing up it to rescue us and might therefore cut it off? For its author at least, SSC is about something very important: the central place sadness has in the human condition, and the importance of allowing it to be there.

One of my very first clients taught me that the root of the word vulnerable is the Latin word, vulnus, meaning wound. The moment he said it I could feel this new understanding fall down through the depths of me, like a pebble dropped in a well. Vulner-able. Able to be wounded. Having been wounded. Yes. Yes, of course. SSC is essentially all of a piece with my work as a therapist, in that it’s about voicing and valuing the painful, unwanted, overlooked, uncomfortable, vulnerable, sad… whether in other people or within ourselves. For reasons to do with my own wounds, bringing those silenced, neglected parts of experience into the fold—treating them as Levertov treats the dog in the poem which accompanies this post—* is what I want to be doing with my life. It feels like what I’m here for.

Ahem. You can tell how much I mean all this. But don’t imagine that the two-ish years I spent working on the libretto were marked by a sense of high purpose and delight in creation. No. Instead, picture me writing bits, getting frustrated, shoving the notebook to the back of the drawer, hoping Clive (who wrote the music) would forget about it, forgetting about it myself, hating the bits I’d written, wondering whether the basic shape of the story was ridiculous, meaningful or neither of the above, scribbling bits on a plane, in cafes, on trains, wanting to abandon the whole damn thing but feeling obliged to carry on because Clive had already written some music, and eventually just determining I would finish it—just write something, any bloody thing—by the end of 2018 and hand the whole thing over to Clive. I couldn’t bear it lingering into another new year. The day I was finally able to stop migrating the task “work on SSC” from month to month in my bullet journal and cross it off was a tremendous relief.

Clive had already set one of my poems to music and I’d had a taste, then, of how miraculous it was that someone could take my words and make them into something (even more) beautiful. Just as poetry is not form plus content but form times content, so song is not words plus music but words times music: the sum is multiplication, not simply addition. As the months went by, every so often at the end of choir practice Clive would tell me he’d written another section and we’d disappear into the vestry where he’d play it through to me and look up with an endearingly hopeful—vulner-able—expression on his face to see what I made of it, whether he’d caught what I was hoping to say. The way he’d beam with delight when I was delighted was gorgeous to see. His face really did shine with joy.

Thus, eventually, we got as far as a completed score, and a concert date. For some reason it wasn’t until the first rehearsal hove into view that I realised quite how exposed (that vulner-able thing again) I was going to feel. A choir of people I’d known for 22 years—most of whom I like, some of whom I love, and a few I find, like, really challenging—were going to be reading, and singing, my words. Plus as well as the choir there would eventually be an audience (I hoped). Yesssss! But also Nooooooooo! Would they like my words, hate them, not care about them? Would they think less of me when they knew what we’d made? Would I think less of me? Julia Cameron, in The Artist’s Way, insists that the creative part of all of us is a child—who can play and be free, but who struggles, sometimes, to regulate her emotions and deal with setback and fear. I was feeling it, folks, I was feeling it. I comforted myself with Cameron’s insistence that our creatives are child-like, not child-ish. The difference lies in acceptance, rather than judgement or shame.

Still, the first rehearsal was excruciating. I felt hyper-aware of everyone in the room. Yawns, grimaces and mutterings were probably nothing to do with SSC but they felt like criticism; fear brings out the solipsist, narcissist and paranoid in many of us, and I was in a lather of defensive self-consciousness. But at the tea-and-cake stage of proceedings I got several encouraging comments, and many more over the next few weeks. People were enjoying it. They seemed to be “getting” it. The many positive comments went into me much less easily, though, than the one discouraging one—one of those sentences which began, “Well, I’ll be honest with you…”. (Few of us enjoy sentences which begin that way; and why would you say that anyway?? However.)

But by the week before the performance I’d come to terms with the fact that my words for SSC were good enough. Bits were really good, other bits were ok-enough; and if I could see what I’d do differently next time, well, hey that’s what learning is. (Grasshopper is coming on, Master.) Hearing the choir and soloists sing Clive’s music, too, was very different from hearing it played through in the chilly vestry. Suddenly it was all coming to life: life that I had played a part in creating. For anyone—but particularly, perhaps, for the childless-not-by-choice—being part of the life of a new thing is wonderful. I was proud: not of what I’d done (though there’s that, too) but, more importantly, of the fact that I’d done it at all. Once I’d got to that point, I couldn’t lose. I was free to revel in it.

And I did! The day of the performance brought many friends to the church to hear the piece. It also brought Susie, down from Scotland specially, Richard (primed to hug me to hide 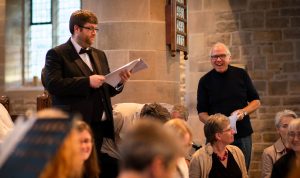 the post-match tears), and the first full run through of the piece. All of this pierced me with gratitude and joy. Particularly in the arias and recits., Clive had created some powerful, moving music, and it was performed with tremendous sensitivity and skill by the soloists. I, meantime, got to sing the part of the Crone/Wise Woman—admittedly Old Mother Love sounds better—and I loved being able to sing full-heartedly the words I believed in so passionately. My friend Jane had always been destined to sing the part of Sorrow: hers is a clear voice of crystal purity, beauty and calm, and to hear the song of the Silent Child—Sorrow no longer silenced—was amazing. It was almost the first bit I wrote, over two years ago (I always knew it was at the heart of the work), and hearing it sung at last moved me to tears: “’Oh, I will break your heart/And I will sear your soul/And I will fell you low/And I will make you whole.//And as your once-world falls/And crashes all around/Your heart’s blood out must weep/To sweeten the dead ground.//So let me break your heart/And let me sear your soul/And let me lay you low/And let me make you whole’”. How I wish you could hear her sing it.

When the storm is over, Sorrow returns to be with Old Mother Love as she dies (or goes “to her long home”, as Ecclesiastes has it). At this point I’d written that all should sing:”’You need not walk on your own./We will not let you go alone.’” Clive had set this so that the sopranos sang the first line, and then the full choir came in for the second. This was such a simple and beautiful piece of word-painting that, again, it made me cry: it enacted the idea that sorrow should never be left unaccompanied (except when it wants to be). Hearing this bit, particularly, I felt joy and deep satisfaction. Sorrow is precious, because it is an aspect of life, and love. It should have its rightful place. And we’d made something which puts that message out in the world.**

My work was done. 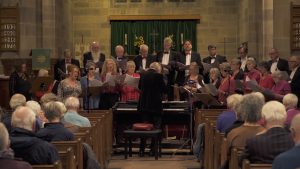 *You can read the Levertov here.

**All photos, apart from the poster image, are published courtesy of Film on the Brain. My thanks to them.

***We’re tidying up the score for publication so SSC will be heading off out into the wider world. Exciting! Plus, there will be another performance next year. I’ll keep you posted on that.

And here’s Neil Hannon on our contemporary Western’s culture’s fear of sorrow, and how ‘feeling sad is no longer allowed‘.’

12 Comments on thing 43: ‘yourself/my own dog’: the Song of the Silent Child